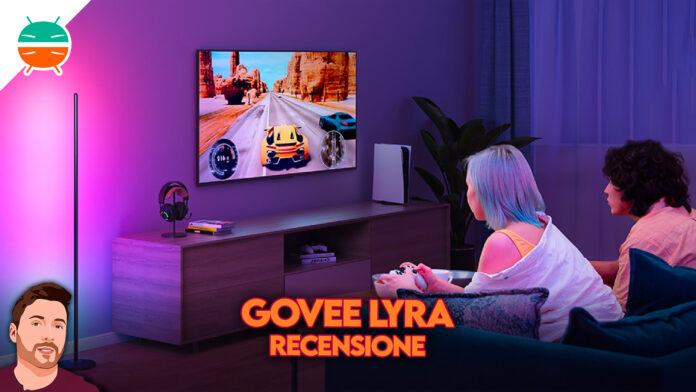 With over 6 million users worldwide, there is no doubt that Govee is one of the brands that is making its way in the world of intelligent lighting. Of course, the company not only produces countless types of smart lights (but also IoT devices such as thermometers, bells, etc.), but it is thanks to this type of product that the brand is growing exponentially and has become one of the best sellers. on Amazon.

And the reason is soon said, indeed, the reasons: ideas and quality. Because if on the one hand, thinking of a good product and then making it badly is definitely counterproductive, on the other hand even the best made product is doomed to fail if it is not born with an interesting idea.

Many, for example, will have had the opportunity to know the LED strip for TV with camera by Govee that can simulate the Ambilight effect, and even if this will not be the subject of this review, the Govee Lyra quarrel (a RGBICW lamp from corner to floor) brings with it all the quality and the idea.

When I received the Govee Lyra, I was eager to understand what I could create using it. First, however, I had to proceed with the assembly of the floor lamp: it is a rather simple and straightforward operation, which however requires a bit of patience.

All assembly of the Govee Lyra consists in screwing the aluminum structure, starting from the base, with very small screws. The vertical sections are different and all are anchored to each other thanks to small screws which, I must admit, are not very easy to center.

Taken the hand, however, everything else flows like oil. The LED strip is inserted in a sort of satin silicone case, and will be connected first of all to the connector located near the base, and then be inserted inside the aluminum structure.

Once the assembly is complete, the game is done: all you have to do is connect the Govee Lyra to the electrical socket and proceed with the association of the smart lamp with the Govee application: it is an app available for both iOS and Android, whose configuration process does not depart from the typical procedure that characterizes this particular category of devices.

140cm high with a 20cm base, the minimalist design of the Govee Lyra it makes positioning rather simple and almost allows it to “hide” in the furniture when it is not in use. The only real drawback of the design of this lamp is the length of the power cable: it is a lamp that gives its best if placed in a corner, but given the too limited length of the power cable, some people may have difficulty in positioning it correctly unless they use an extension cable.

The structure of the Govee Lyra it is technically as simple as it is ingenious: the LED strip is divided into 7 completely independent sections, which can be managed through the application both manually and automatically (based on preset effects). Its RGBICW nature allows it to reproduce 16 million colors or a wide range of whites ranging from 3300K to 4300K.

The maximum brightness is 1000 lumens, but before deciding to buy this lamp one thing must be clear: despite the more than sufficient brightness, its structure does not make it a product designed to illuminate a room.

It is a lamp for diffused light, whose luminous surface is pointed towards the wall (or at least a reflective surface). I have read around several reviews about this product, in many of which it was written that the power cable was placed in the wrong way: in reality, those who wrote these reviews did not understand that the cable is positioned correctly, i.e. in the side where the Led strip can be seen with the naked eye, and that the positioning of the govee Lyra it was designed with the luminous surface facing the wall.

Given the presence of 7 totally independent sections, the real strong point of Govee Lyra it is in the fact that it is a lamp capable of perfectly mixing colors: it is a possibility that opens the doors to an infinite number of variations, all managed through the application of the brand.

The app in question is called Govee Home, and is an application available for both iPhone and Android, which can also be associated with Google Assistant or Amazon's Alexa. All in all, this is an app well done but which, in my opinion, should have been better organized in the interface, precisely because the available features are numerous.

Through the app it is in fact possible to manually manage the coloring of each of the 7 sections that make up the lamp, which can be customized in color and brightness, but it is with the dozens of preset effects that you will begin to understand what the potential of the system is.

Thanks to these presets, it is possible to take advantage of countless animations designed to generate precise lighting effects divided into categories, or rather, into "occasions". There Govee Lyra for example, it can simulate the explosion of fireworks, it can simulate the effect of a lit fireplace and so on.

There is also a "music" mode with which the lamp will start to turn on and off to the beat of the music, and can do so in two ways: using the microphone of the smartphone to which it is connected, or using an internal microphone of which it is equipped, so that it can be totally independent from the mobile device. And even in this case, the styles of synchronization with the music are numerous.

The price of the Govee Lyra is 99,99 euros on the official store, a price perhaps not suitable for everyone but which, after all, is more than justified by the myriad of possibilities that guarantee its sectional structure and application. It is a lamp that, when turned on, is able to stand out in the environment in which it was placed, when turned off it can become almost "invisible", and is then full of lighting effects capable of recreating very pleasant atmospheres.

Of course, it is not one of those lamps capable of illuminating a room and yes, the company could have thought of a longer power cable in order to simplify its positioning, but at home I only have smart bulbs and lamps (seriously , I no longer have a simple traditional light bulb) and I have always wanted to find an atmosphere light able to diffuse colors and effects: the Govee Lyra it is able to do this, but also much more.

Buy the Govee Lyra on the official company store!

Buy Now
It does not expire