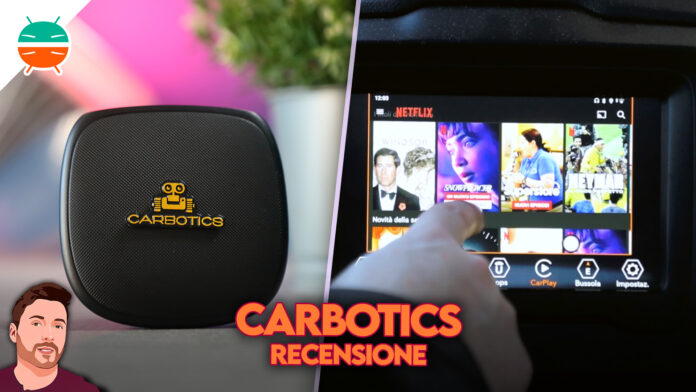 On Indiegogo and other crowdfunding platforms, in recent months Android systems aimed at car infotainment have been gaining ground, with which manufacturers try to overcome the intrinsic (and more than fair, in my opinion) limits of Android Auto and CarPlay.

Your car platforms designed by Google and Apple have actually revolutionized the integration of smartphones in their cars, giving, so to speak, a new lifeblood to entertainment systems. And it is thanks to the systems of the two giants that (especially in China) some companies have begun to produce aftermarket boxes with which to expand the capabilities of car infotainment.

We've tried several and I'm honest: many don't work very well. But with Carbotics (formerly CarPlay2Droid) however, things have changed: first of all, it works, and it is the only one of the products we tested, able to connect to the 4G network in a completely independent way and, thanks also to this, to guarantee a fast and accurate GPS fix. But one thing is clear: in order to use it, it is essential that your car is compatible with CarPlay.

What is it for? First of all, it allows you to use smartphones with Android Auto or Car Play in totally wireless mode and then, in a nutshell, transforms the car display into a sort of Android tablet, complete with a Play Store and the ability to download practically all the applications developed for Android. Netflix, YouTube, Spotify, Maps, but also the Nest app and so on: the point, however, is that given its potential, it must be used with conscience. Because it could be dangerous.

Using apps like Netflix or YouTube, or any other application that distracts from driving is something you shouldn't do. It is dangerous for oneself and for others, and moreover it is illegal. And I know it might seem like a rather trivial premise, but anyone who thinks they want to buy this product will have to do so with the knowledge that they are exploiting some of its features exclusively when they are not running.

Carbotics review: the box that transforms CarPlay into a 4G Android tablet (with the Play Store)

Carbotics it is a very small box with rounded corners. It's not very bulky, but it's not microscopic either. It is made entirely with a rather light plastic and in the upper area it integrates a not so elegant golden logo. Then there is a USB-C port with which the device will be connected to the car, next to which there are two other inputs: there is the one for the microSD, and then there is the one for the SIM.

However, it does not support nanoSIM: to be able to connect Carbotics at 4G it is necessary to use a microSim which, among other things, must be inserted very carefully: on the body there is a graphic that should help to understand the right direction of insertion, but it is small and difficult to interpret.

On the microSIM question and on the need to actually use a bigger card than nanoSIM I don't know, it was probably a choice due to the internal architecture of the device, or simply those of Carbotics they thought about making things easier by using a bigger sim. But they didn't succeed.

To animate Carbotics there is an octa-core Qualcomm processor that, without a fan, is capable of working up to 1.8 GHz and is flanked by 4 GB of RAM and 64 GB of internal memory. Despite the passive cooling system, the heat dissipation was managed in an optimal way: even after rather prolonged use, Carbotics it does not heat up too much and continues to work without any particular slowdowns.

Carbotics It is then available in two versions, one equipped with a cellular module and the other without but, personally, if you are interested in buying it, my advice is to aim for the version equipped with 4G and not only because in this case, inserting a SIM, the device will be completely independent from the smartphone, but above all because in this model the GPS fix is ​​much faster and more precise.

And in addition to GPS, this Android box also integrates a WiFi module and above all bluetooth: in this way you can connect your smartphone not only to use Car Play or Android Auto wirelessly, but also to take advantage of Carbotics like a real Bluetooth speakerphone.

Android use and experience

As for all devices of this type, also to be able to use Carbotics there are two essential requirements that the car in which you would like to connect it must meet. First, your infotainment system must be compatible with Apple's Car Play, and then it must be equipped with a touch display.

Once you have plugged the device into the USB socket of your car, you will have to wait a few moments and the game will be done. The car's infotainment will deceive itself into believing that an iPhone has been connected with Car Play, and the initial screen will appear on the screen. Carbotics, which is very similar to that of a smartphone in landscape mode, in whose home screen there are some pre-installed applications.

Already on his own, Carbotics It will come with YouTube, Netflix, YouTube Music, Waze and Google Maps pre-installed, but through the PlayStore you can download everything. Of course, given the rather limited hardware it is good to keep in mind that games with complex 3D graphics are to be put aside, but in our tests we have to use video streaming apps and music streaming, obtaining a complete 360 ​​° user experience in the which you can also take advantage of the split-screen to have two applications side by side.

However, I was unable to use SkyGo. This device is animated by Android 9, customized with a graphical interface which - in my opinion - should perhaps have been thought better (especially as regards navigation in the menus), but which above all is already rooted by default: which means say that apps like SkyGo don't start for security reasons.

Needless to say then, that with Carbotics it is possible to use all platforms for cloud gaming: both with Game Pass and with GeForce Now and Stadia, I have not found any limitations other than the one relating to the speed of the connection in some areas with poco field. And the same goes for PS5 Remote Play.

Then, among the pre-installed apps, there is a very important one: SpeedPlay. This is precisely the application that must be started in order to use your smartphone using Car Play or Android Auto in a totally wireless mode, and this is the application that will give the Carbotics two very specific uses: that of an Android “tablet” independent of the smartphone, or that of a wireless adapter for Car Play and Android Auto.

Unlike the vast majority of products in this category that we have tested, Carbotics it also has an added advantage: GPS really works. You can use Google Maps, Waze and any other application without any problem and the fix is ​​always fast and accurate, even when you are among the buildings.

Furthermore, through the Telephone app, it will be possible to make phone calls directly from the machine, even without your smartphone and using the SIM that is inserted in the device to allow the 4G connection.

To date Carbotics is still only available on Indiegogo, but is already in the pre-production phase, while on the official website of the company the device is in the pre-order phase. The price is around 176 euros and shipments should start shortly. It is an interesting product that, in our tests, performed well. It does what it promises, and does it without a hitch, but should only be considered an alternative to the normal infotainment system, which should be used practically only when you are not moving, for obvious safety reasons.

Of course, when you are traveling you can take advantage of it to listen to music, for navigation, to make phone calls, but these are all things that can actually be done even with Android Auto and Car Play. However, it also allows you to take advantage of these platforms and in a totally wireless way.

With the car off, however, Carbotics wins hands down on the traditional systems of Apple and Google, because it offers the possibility to install and use practically all Android applications, opening the door to infinite usage scenarios.