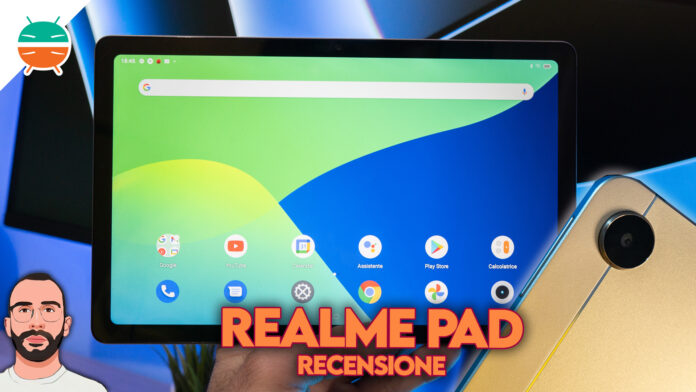 Although smart working and online lessons are decreasing in favor of returning to companies and school desks, the growth of the mobile sector shows no signs of slowing down; Realme has added a further step to its growth process, officially presenting its first tablet, the Realme Pad, a product with high potential but above all with a decidedly low price.

Its strong point, therefore, is precisely the strong quality-price ratio, as well as an exceptional autonomy given the large battery from 7100 mAh: I tried it and I'll tell you about it.

I'll be honest: knowing the price I never expected attention to detail, materials and top assembly, and instead Realme amazed me, once again. I had seen this tablet in some press releases and from the images the idea I had made was that of a glossy marketing, and that the product could not have been like that.

The reality, however, is another and you notice it right away: Realme Pad is made entirely of aluminum and available in Gray and Gold colors, both quite nice. The weight of 440 grams it is decidedly well distributed along the device which can be held well in the hand, thanks also to its "tile" shape and its 6.9mm thickness. You feel that it is assembled well, no doubt about it, Realme he did a great good job.

On the back Realme Pad houses a single camera without an LED flash, while the volume rocker is present at the top on the right side and the power one, instead, on the top. Good speakers: there are four available on board, and they also sound pretty good thanks to Dolby Atmos support.

There is the Type-C connector at the bottom for charging, it is still present, in a secluded position at the corner, the 3.5mm jack for headphones; on the right side, moreover, there is the trolley for memory expansion via MicroSD. There is a variant of the tablet with on board also the possibility of inserting the SIM card in Nano format, but for the moment this version is not in the catalog and really available on the official Realme shop.

To be honest, the presence of rather important bezels along the front display is a little out of place, but this is perhaps one of the few aspects that will give you the impression of having a cheaper product in your hands than the competition: however it is not a relevant aspect for many, especially not for the audience this tablet is aimed at. Surely many will think that the similarity with the Xiaomi pad 5 it is important, it is true, but in practice there are some differences that cannot go unnoticed.

The panel chosen by Realme for its tablet is a unit from 10.4 ″ 2K IPS LCD with a resolution of 2000 x 1200 pixels and a density of 224PPI, certainly not among the highest of its kind. What made me a little less enthusiastic is the absence of a high refresh rate of the display which here, unfortunately, it does not go beyond 60Hz canons we have been accustomed to for years; in addition there is no compatibility with HDR which leaves room for good visual optimization for the reduction of blue lights and the improvement of the reading mode.

In practice, what I have been able to notice is an excellent color calibration even if with very few possibilities of customization within the settings, really reduced to the bone. The maximum brightness guaranteed by the manufacturer is equal to 360nits, a decidedly good value for the "working" use of the tablet with email, web browsing and similar operations; on the contrary I would have preferred a brighter panel to better enjoy the contents on the various streaming platforms, but on something you had to save and Realme it has, in a sense, sacrificed the display.

The viewing angles aren't great, but it's a limitation of all displays that use this technology, so I don't feel like blaming it. Realme. Small sore point is the oleophobic treatment that is not excellent and the anti-reflective one practically non-existent.

What better processor than a Helio G80 Mediatek to reduce costs and maintain balanced performance? The Helio G80 represents, in the world of tablets and beyond, a good choice because it is able to offer reliability and performance at a decidedly low price; the SoC by now we know it, it is an Octa-Core with 2 Cores Cortex-A75 of 2GHz and 6 Cortex-A55 of 1.8GHz coupled to a Mali-G52 GPU, 6GB RAM memory e 128GB of eMMC 5.1 Storage (for the record, there is also an Entry Level version with 4GB of RAM and 64GB of Storage).

Le performance, at least if we rely purely on the numerical side of the term, they could be roughly 50% lower than it Xiaomi pad 5, but we know how well poco can count the numbers in daily use; this is to say that Realme Pad does not miss a beat in daily operations such as web browsing, video calls and "office" use.

Also watch movies in streaming it is an easy task for the Realme Pad that loses a few hits only in massive gaming, running the most famous titles at a low level of details and with a framerate not so high. It's a "budget tablet”And as such it was not created for gaming as much as to meet the needs of more traditional users: Realme Pad is reliable for those who do not use too many apps at the same time and are not looking for a thick multiasking.

RealmePad owns a single camera on the back from 8MP with aperture f / 2.0 and, as often happens in this area, it is without LED Flash; the front lens, on the other hand, is 8MP also with f / 2.2 aperture and a wide angle view up to 105 ° which makes the difference during video calls allowing you, in fact, to have a much wider view than what we usually see on tablets.

The photographic quality is sufficient; there mass On fire automatic is not rapid and in poor light conditions it is a bit difficult, but manually you can take more than enough shots in almost all conditions. It is useless to specify that it is a tablet and the demands are much lower than a smartphone: they are cameras useful for capturing some documents or taking pictures in "emergency" when maybe you have an empty smartphone.

La selfie camera is above the average of the competitors: the images have one good definition and, as anticipated, the wide angle of view makes the difference. Good video recording that with both cameras takes place at a maximum resolution of 1080p at 30fps, however, electronic stabilization on both lenses is missing.

On the software Realme has done a good job of optimization, trying to turn the tables very little; the version of Android here is the 11, with very few additions by the Chinese company, which has affected the pure experience of Google in a much more than slight way.

Il RealmePad owns a typical Android Experience launcher, does not have a biometric reader and only has 2D facial unlocking (not the best in reliability). Logically you can find the Play Store on board with all Google services; I noticed some strange limitations in downloading apps through the Play Store which were reported as "not compatible". I was unable to officially install Netflix, if not via APK and it works perfectly: by the way, this Realme Pad is certified Widevine L1 to enjoy streaming content at the highest quality.

Realme Pad has a 7100 mAh, in practice sufficient to guarantee a good autonomy for various types of uses. For example, in the video playback tests I could see how the percentage of discharge, with the display at maximum brightness and under Wi-Fi network, drops by about 10-12% every hour.

This testifies, in fact, of how the Realme Pad can be a device capable of ensuring from 8 to 10 oking of active display without major difficulties and limitations in use. As for the charging speed, the Realme Pad supports charging up to 18W: here, perhaps Realme could have done better, because the charging times on this device are quite long and for a full charge they will be necessary. poco more than 3 hours.

The official prices of this Realme Pad for Italy are € 259 for the Wi-Fi 4 / 64GB version and € 289 for the Wi-Fi 6 / 128GB version, prices definitely consistent with what it offers but above all a good starting point for the many online offers that follow each other over the days; just a few days ago on Amazon, as reported on our Telegram channel GizDeals, was on offer for only 197 € which makes it, in fact, a real best buy.

The potential is all there, and for video lessons, video calls and poco other, it is difficult to find equally valid alternatives; increase your budget and aim for Xiaomi pad 5instead, if you need the pen, and better performance to play. 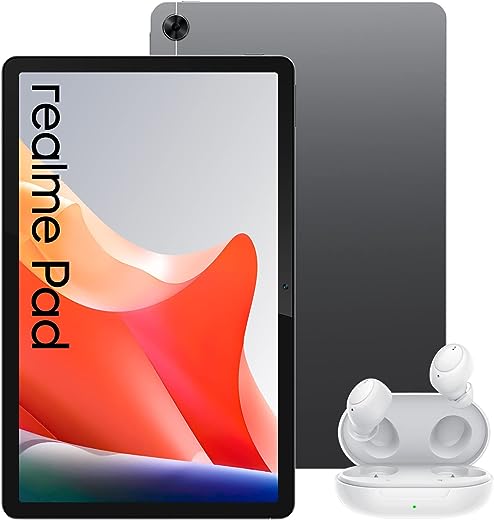