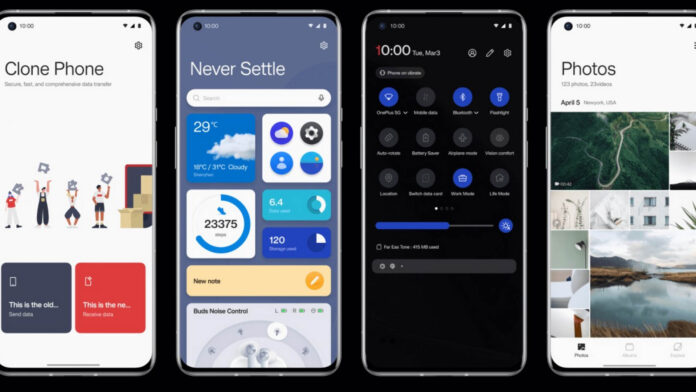 After the program starts Open Beta, OnePlus officially presented its new OxygenOS 12. An important update, not only for the news it brings with it, but also because it is the first since the company has been joined with OPPO. The merger triggered the creation of increasingly similar software between the two companies. As for OxygenOS 12 and ColorOS 12 remain two separate UIs, they begin to notice more and more similarities between the two. That said, let's see what changes we will see on future smartphones and on existing ones and which will be updated.

OnePlus and OxygenOS 12: all the news announced

With the update to OxygenOS 12, OnePlus smartphones have a renewed look in the software, with simplified and refined visual elements. The UI accentuates the effects of lights and shadows, with cleaner lines and geometric shapes and rounded icons instead of circular ones, precisely in ColorOS style, a similarity that we also find in the new graphic customization menus.

OnePlus claims that with the OxygenOS 12 the user experience is more stable and smooth, as well as with better autonomy and data privacy. An AI system booster has been added and the Quantum Animation Engine 3.0 to improve animations and feedback.

With the new update, the Zen mode is also updated, to which 5 new themes and music for relaxation have been added.

The section Shelf becomes even richer, with many customizable options and integration with OnePlus Watch and Buds. As for the function Scout - which now debuts globally after India - this is an enhanced version of the search bar. This allows you to quickly find anything on your smartphone (documents, contacts, music, web information, etc.), complete with a voice search function.

The application Notes change style and gain support for the Drawing function, to draw and make quick sketches or notes. In addition, new RTF options and the ability to pin notes in Shelf have been added for quicker access.

The functionality Work Life Balance 2.0 allows you to easily switch between app notification profiles based on time, location or Wi-Fi. You can set up a work account to reduce distractions; Favorite apps can only be allowed during breaks, so you are in complete control and work (or study) at peak concentration.

The new version of Dark Mode gains support for 3 levels of adjustment, so you can choose your preferred mode between a gray background in two shades or a completely black one.

The Canvas 2.0 feature of theAlways-On Display becomes even more precise thanks to new optimizations: new colors and more customizations and an improved final effect. There is also with the option to remove the strokes that were not made correctly.

Given its entry into the world of smartwatches, with OxygenOS 12 there is a better integration with Oneplus watch. Once paired with your smartphone, you can take advantage of its display for satellite navigation, controls for music on Spotify and sync with alarms.

With the OxygenOS 12 the Gallery app has also been modified, now able to automatically arrange photos with a dynamic layout with a more attractive graphic appearance. Of course, there remains the possibility to explore the albums with the standard style.

Below is the list of OnePlus smartphones that will officially receive the update to the OxygenOS 12: