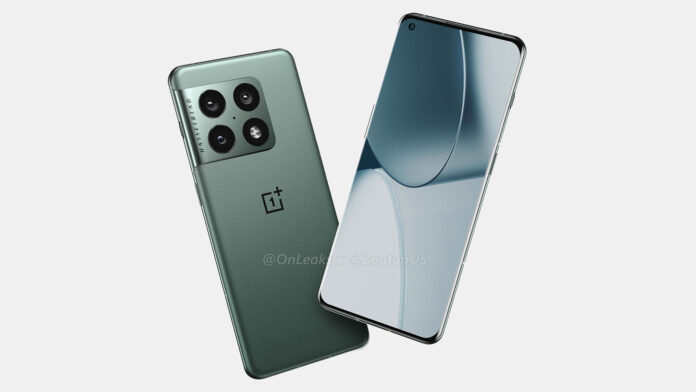 We had anticipated it and now it is confirmed by the world of leaks: OnePlus 10 Pro will be officially presented at the beginning of 2022. To put his signature on this indiscretion is the usual Max Jambor, a leaker always very active but above all reliable when it comes to the OnePlus brand. The company's intention appears to be to catch up with the rest of the competition. Let's think for example of Xiaomi 12 and Moto Edge 30 Ultra (Edge X), both of which are expected to launch in December. Or even to the series Samsung Galaxy S22, which is expected to be unveiled to the public in February.

27 / 12 Update: OnePlus has announced the release date of its new flagship, confirming the anticipation of its arrival on the market. Find all the details at the end of the article.

OnePlus 10 and 10 Pro will arrive sooner than expected, but not for everyone

On the contrary, OnePlus has always presented its top of the range months later than its direct rivals. The historic OnePlus One arrived in April 2014, OnePlus 2 in July, OnePlus 3 and 5 in June, OnePlus 6 and 7 in May, OnePlus 8 in April and finally OnePlus 9 in March. But apparently OnePlus 10 Pro would already be in the private test phase, therefore substantially ready for marketing in the coming months. As reported by leaker Max Jambor, the launch of OnePlus 10 Pro should take place in the period of January / February 2022. This would be the first time for OnePlus, which so far has always used the spring or summer window to launch its top of the range.

But there is a "but", as well specified in the roadmap shared by Max. The launch at the beginning of the year would be dedicated solely to the Chinese variant, while OnePlus 10 Pro Global would come again between March / April 2022. This would mean that the marketing outside the borders, therefore also in Europe and Italy, would take place in the months following the debut in China. A strategy that takes us a little by surprise, given that until now OnePlus used to focus more on the Global market than on the Chinese one. This is because in the mother country it has always had lower sales than in Western markets.

Note that the leaker refers only to OnePlus 10 Pro, without mentioning the standard model. We will see if this time difference will also affect the latter.

We just have to wait for an official communication from the company on the presentation date of OnePlus 10 and 10 Pro. Until then, we refer you to the dedicated article where you will find all the specifications and news of the two smartphones.

"Write down the date“: This is the announcement that comes from the OnePlus social pages, accompanied by the date 5st January. The post says so explicitly, but the indication "Las Vegas”Leaves no room for doubt: at the beginning of the year the CES 2022.

Could the US fair be the stage on which the arrival of OnePlus 10 will be shown to the general public? We tend to exclude that there may be a real event, but rather an anticipation of the next top of the range. Also because we remember that this month of December is the debut month for various competitors, such as Moto edge x30 and especially Xiaomi 12, but also for the first info about Realme GT2 Pro.

After the previous rumors that we have reported above, the brand has officially confirmed that OnePlus 10 Pro will be presented in the month of January 2022. And not surprisingly, to make the announcement is the same CEO Pete Lau on Weibo, who without too many words released the news.

The doubt remains for the basic model, which for some time has been said to arrive at a later time or even not arrive at all, as we report in thededicated in-depth study. Furthermore, the fact that he did not use Global channels may be indicative of a separate distribution months later.

After various leaks and first confirmations from the CEO, we will soon find out when it will be presented OnePlus 10 Pro. Indeed, the next January 4 2022 we will see the announcement of the release date of the new flagship of the Pete Lau brand, which on Weibo also showed the lower part of the device. This choice translates into strong "internal" competition with Realme, which it will present GT2 Pro on the same day, although then OnePlus will come later. The doubt remains for the basic model, which for some time has been said to arrive at a later time or even not arrive at all, as we report in thededicated in-depth study.

OnePlus 10T comes to a bad end in endurance tests