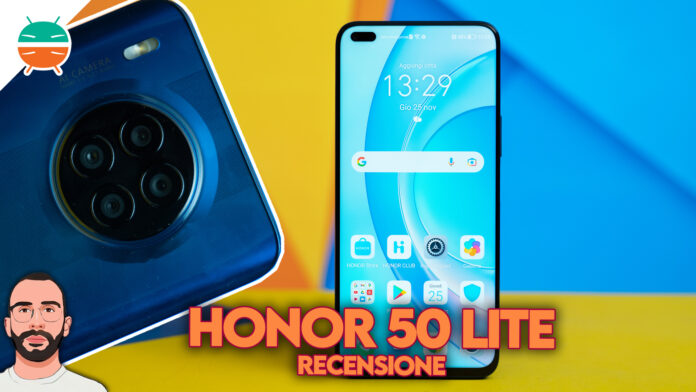 Not long ago Honor launched theHonor 50, a mid-to-high-end device that we didn't like poco. It is known, however, that every product on the market requires at least 2 alternatives that differ mainly in terms of price, it is one of the first and oldest sales strategies.

Said and done, why Honor has made the new one official a few weeks ago Honor 50 Lite a device suitable for practically all budgets because it is sold to only 349 €, but you can often find it for € 299!

In terms of materials and constructions, Honor 50 Lite it is configured as a high-level product, despite its market positioning. It is made of aluminum along the frame, and the back cover is in plastic with very attractive finishes and a quad camera inserted in a circular frame. The coloring Silver is undoubtedly the most showy, or unfortunately I have received one more classic Blue, which however always has its charm, even if it could go unnoticed.

There was no space for the flash, and Honor inserted it outside the circular frame. L'assembly is of a good standard, on the whole, even if in some points of the back cover (for example near the camera) you can notice some bending but it is absolutely irrelevant, and except for specific tests, you will not even notice it.

For the rest, the back cover retains some fingerprints, it is true, but it is equally true that it is very easy to clean (even with the hand itself).

Interesting, for the current times, to find a jack from 3.5mm for headphones, and this testifies how this product is aimed at a very specific target, the idea I got is that of the over 40-50s poco accustomed to technology and still in a process of "digital transition".

The volume rocker on the right side together with a biometric reader for unlocking, and then at the bottom the Type-C connector for charging and the speaker (which is only mono) complete the equipment.

Le dimensions are in the market average, equal to 161.8 x 74.7 x 8.5 mm and the its weight is 192gr; the smartphone is held well with one hand, although I would have preferred the integration of the biometric reader a little higher, but this is a purely subjective criticism (to which you can queue and agree if you have medium-large hands dimensions).

Il it has a screen-to-body ratio of 94,4%, thin bezels along the side edges and a diagonal of 6.67 ″; the only one of the sides with a slightly thicker edge is the lower one, where Honor has not worked symmetrically with the upper edge.

Leaving out this small detail, the here is a type panel IPS LCD with a resolution of 1080 x 2376 pixels and a density of 391 ppi; missing some goodies more and more popular in the latter period, such as compatibility withHDR 10 + el 'high update frequency, but on the other hand it is a product that in the price list is proposed at a price clearly below its competitors (and the street price, certainly, will make you turn a blind eye to some shortcomings).

La quality of this panel is good: the maximum brightness is not very high, the viewing angles are sufficient and the color calibration is good, with support for a wide range of DCI-P3 colors.

In the settings there are i classic presets to choose from for chromatic tones of the display, or alternatively there is a manual regulator with which to create your color profile. To be honest, maybe a little bit I missed the high refresh rate of the screen, probably this one Honor 10 Lite he would have deserved a little more on this front.

The hardware equipment is mid-range, even if not very recent; the processor chosen by Honor that's why 50 Lite is one Snapdragon 662 Octa-Core, 6GB RAM memory, 128GB of internal memory and a Adreno GPU 610. As far as I could see from the official Honor store, this is the only version that will be marketed with no other variants available.

Overall, the smartphone runs well, especially if I always think of the target to which it is dedicated: it is clear, it is not a product suitable for the youngest, or at least for the most demanding ones, but it is a smartphone dedicated to users for whom the smartphone is a communication tool, e poco other.

In daily use this Honor 50 Lite performs all the required tasks well; it is fast in the use of system apps (such as the Mail app, Pec or similar), in web browsing and also in consulting social networks or messaging apps of all kinds.

Its weakest piece is the Gaming, but I never dreamed of putting it to the test in maximum graphic detail; however in tests it does not come out with broken bones at all, and indeed at medium details it manages to maintain a constant framerate, without heating but above all without having a high battery consumption, which is good.

in benchmarking we could have seen better numbers, that's for sure: it is not a smartphone, however, to be stressed on this front, but more to be used in the field in daily tasks. There is also the NFC to be exploited for payments with Google Pay.

La quality photographic is discreet; from Honor, given the good work done with Honor 50, I would have expected something more from the 64MP camera but overall the quality of the shots taken is acceptable. The chromatic range is good, the colors of the photos taken are real and never altered by the software processing of the camera; Speaking of HDR, there is a mode dedicated to him and therefore it will not activate automatically when shooting.

Just the app camera it is a noteworthy aspect, at least in terms of massive presence of features and optimizations; in the hands of an expert user this smartphone can give much better shots than those obtained with the point and shoot.

As for the others camera, the wide-angle lens follows a bit what was said for the main one; good quality shots during the day, a little less at night. Unfortunately the sensor is not very bright, and the results obtained are already above expectations. A bit like all the others are, however, the macro and depth sensors: they are not distinguished by quality, but without infamy and without praise they do their job.

La 16MP f / 2.0 selfie camera he works discreetly in good light conditions, while in the absence of lighting he gets help from the “software” flash that illuminates the scene. Finally, the videos are recorded maximum in 1080P only at 30FPS; optical stabilization is missing, but the results are acceptable.

Unlike Huawei, Honor has not been "banned" by Google, so much so that this new Honor 50 Lite is fully functional with Google services, and consequently you can download apps from the Play Store and so on. The software is based on Android 11 with Honor's proprietary interface, the Magic UI in version 4.2; the security signatures are updated as of October 1st.

Il software runs fine, is well optimized and feature rich; there are tons of applications pre-installed on first start-up, many of them useless and thankfully one-click uninstallable. For the rest, the system guarantees good performance to the smartphone.

Small note: it is Widevine L1 certification absent (it is L3 certified), this means no full resolution streaming on platforms like Netflix, Disney + and others.

Most noteworthy aspect is the battery: here we find a unit from 4300 mAh able to ensure a rather long autonomy, especially considering that the processor used is not so demanding of resources. Thanks to the good optimization of Honormoreover, it will be possible to arrive until the evening and, in some cases, be able to cover a day and a half of average use.

Thanks to Honor Super Charge up to 66Wmoreover, the Honor 50 Lite manages to charge in a rather short time; from 2 to 40%, for example, only 10 minutes of charging are sufficient, while for a complete recharge it takes only 39 minutes, one of the most interesting values ​​among the mid-range.

Honor 50 Lite is the classic smartphone that you would recommend to a friend and relative who buys more often in the store than online and does not have such a high budget; Honor 50 Lite does its job well, does not suffer particularly in any area and is suitable for all types of uses.

349 € is its official list price but it can be found on the Honor website for € 299, often also in promotion with various accessories as a gift: it is a balanced smartphone, overall, but the different online offers, perhaps could make you lose sight of it. To be kept under observation.

Honor Band 6 AS A GIFT

Sold and shipped from the official Honor store