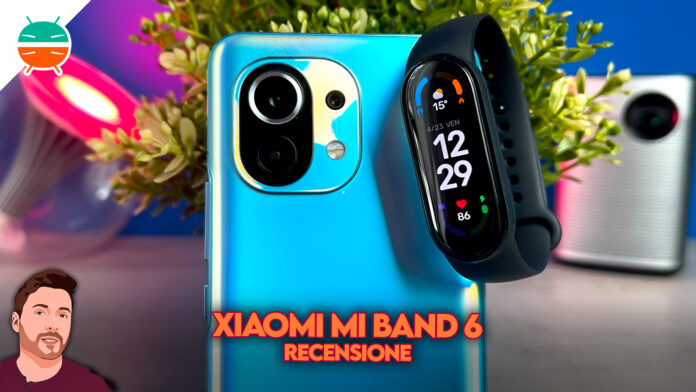 Let's face it, the Xiaomi Mi Band 6 it is what we wished the fifth generation of the Chinese sports tracker was. It has a borderless full screen display, has the ability to calculate the percentage of oxygenation of the blood, but still does not have the NFC or the brightness sensor.

In short, the new version of the smartband most loved by users all over the world reaches the sixth generation and does it in style, while continuing to carry with it some of the limitations that have always accompanied this smart bracelet. But it costs pocoVery poco: through the box below, you could take it home already discounted at € 39,99 with the coupon in the Global version, that is the one destined for Italy and clearly in Italian.

The general line, the form factor and the design of the Xiaomi Mi Band 6 they are not very far from those of the previous generation. And, probably, from a distance it would not even be possible to distinguish the two models. Let me be clear, there are differences, and they are important too, but fortunately the size and shape are identical: which means that with the Xiaomi Mi Band 6 You can use the replacement bracelets and straps that you purchased for the Mi Band 5. The body of the device measures 47.4 x 18.6 x 12.7 mm, with water resistance up to 5 ATM (50 meters).

When switched on, the first thing that stands out is the full screen display in which a panel with characteristics very similar to the one we saw in 5 was used, but with a width of about 50% more: it is of guy AMOLED, has a diagonal of 1.56" with a resolution from 486 152 pixels x, a peak brightness of 450 nits and a pixel-per-inch density of 326 PPI.

All in all, therefore, the quality of the panel is very similar to that of the Mi Band 5, were it not for the fact that the much larger screen area not only allows you to view more information and take advantage of the new Watch faces, but also a much more comfortable and facilitated touch interaction. And given the size there Xiaomi Mi Band 6 it also loses the small touch button that was used for ignition: you can activate it, as well as by moving your wrist, simply by tapping on the display.

Unfortunately, however, the automatic brightness adjustment, and you are still forced to set the value manually: which is really a nuisance, especially in the evening or when you are suddenly directly exposed to light.

Il charging system it continues to be of the magnetic type and will not require you to remove the tracker from the strap: just bring the charger to the bottom of the smartband and let the strong magnet do all the work: in a few moments the connector will be connected to the traker and charging will begin.

Together with the one relating to the brightness sensor, there are two shortcomings that are starting to be felt a lot, especially with the new version of the smartband. Ok, the NFC is missing, but basically it can also be given the complexity of contactless payment systems in Italy, what I did not like, however, is the fact that Xiaomi has decided not to even integrate a GPS module.

When tracking an exercise with the Xiaomi Mi Band 6, the smartband will connect to the smartphone and use its geolocation, thus making it necessary to always carry it with you, even when maybe you could do without it.

But there are some good news, the sensor for the detection of the heartbeat has changed, and it has become significantly more precise in the detection, even if I have noticed a slight delay in the detection: alongside an Apple Watch when the heartbeat increased or decreased quickly. , for example at the end of a physical activity, the Xiaomi Mi Band 6 she realized the change with a few seconds of delay.

Il SpO2 detection instead it is good: comparing the result of the detection of the Xiaomi Mi Band 6 with that of a semi-professional oximeter, the discrepancy was really minimal. But it is important to be very careful: if you take a measurement in less than optimal conditions, such as with the strap too wide or not perfectly still, the results could be distorted.

I found the sleep detection, which seemed to me more accurate than the previous generation and which, by wearing the two smart bands at the same time, is actually able to detect details that remained unnoticed until the Mi Band 5.

Except that, given the display, in the Xiaomi Mi Band 6 it is possible to insert more information in the screens, at the graphical interface level the novelties are decidedly poco relief. We now know all too well the Xiaomi Wear app with which it will be possible to manage the smartband on both Android and iPhone, and all the graphic elements as well as the gestures and the ability to customize the order of the functions on the band have remained almost unchanged. compared to the ones we have seen in the Mi Band 5.

The management of the Xiaomi Mi Band 6 therefore it always takes place through gestures, with icons that may look too simple, but definitely very functional in terms of use. However, the sports that the smartband is able to detect change, passing from the 11 present in the Mi Band 5 to the 30 present in the Xiaomi Mi Band 6, and it is also possible to activate the automatic detection of some of these activities, such as walking, running, elliptical and others.

And in addition to being the most interesting economic smartband of the moment, the We Band 6 also integrates a feature (introduced for the first time in the previous generation) that could please lone travelers, or those who always go out as a couple and then find no one to whom to entrust the arduous task of taking a photograph: you can use how remote control for the camera.

You can then download many new watchfaces, which have been integrated into a well-structured section of the smartphone application and which, in turn, can be customized by choosing the complications to be shown on the screen one by one: I found this selection mode perhaps too cumbersome, also because it is all managed by the touch in a screen that is bigger but that continues to be small. Poco bad though, because it's a very convenient thing.

As for the notifications on the Xiaomi Mi Band 6 we are always at the same point: the new Xiaomi smart band will be able to access all the notifications received on the smartphone, which will be displayed individually but which will not allow any interaction. In short, if you are wondering no, you still do not have the possibility to reply to the messages received, but it is clear that with such a small display perhaps it is better this way. It would have been nice maybe to be able to dictate it to a digital assistant, but in the Mi Band 6, none are integrated.

Without too many words: with my use, that is with all the sensors on and the display set to maximum brightness from 8 to 22, with the Xiaomi Mi Band 6 I managed to get about 4/5 days on a single charge. Not a bad result, but far from the more than 10 days declared by the company which, in real life, it would be difficult to achieve.

The official price of the Xiaomi Mi Band 6 is 44,99 on Amazon, but through our coupon (which you find below), you can take it home for 39 euros. And, at this price, there is nothing to do: it is the best ever. Of course, it will not be perfect and the shortcomings that those of Xiaomi continue to impose on their users are many (and come on, a brightness sensor what do you want it costs), but as a quality / price ratio it is unrivaled.

It's packed with features, it's reliable, it's not super comfortable, but it's light and it really costs poco.

Update | Xiaomi Mi Band 6 NFC available in Italy at a discount: how to use it with all banks

A few weeks after the official sale of the Mi Band 6 in the standard version, Xiaomi has also introduced its new Mi Band 6 NFC on the market.

The method is simple, fast, intuitive and free: Curves. To read the complete guide and to see a video tutorial in which we explain how to associate the Mi Band 6 NFC with incompatible bank cards, click here.

Buy the Xiaomi Mi Band 6 in the GLOBAL version (and Italian language) with our coupon!