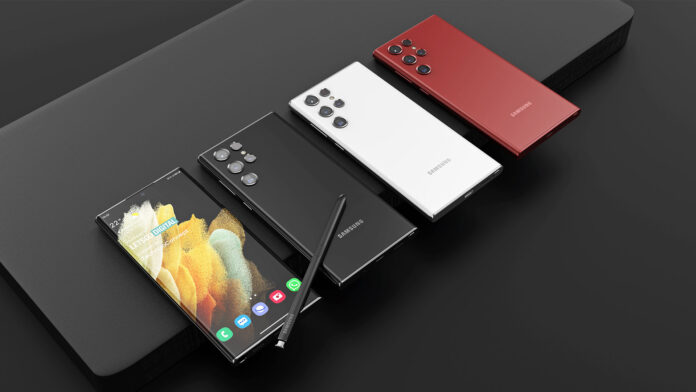 2022 will be the year of Samsung Galaxy S22, S22 + e S22 Ultra, the successor of the much appreciated S21 and top of the range of the company. Although the curiosity is all for the next leaflets Z Fold 3 e Z flip 3, the Galaxy S family continues to be the most advanced. Not so much in the forms, as in the specifications, especially the photographic ones, increasingly requested by the enthusiastic tech users. And it will not be outdone by an S22 Ultra for which a further upgrade of the main photographic module is planned, but not only. Let's see, therefore, what should be the news that Samsung would be planning for the next batch of flagships for next year.

Samsung Galaxy S22 and S22 + would be equipped with a 6,06 " e 6,55 " Full HD + with LTPS AMOLED technology. The screen of the Ultra model would be much more valuable, from 6,81 "Quad HD + with technology LTPO (Low-Temperature Polycrystalline Oxide). A feature that would allow, just like Note 20 Ultra, to enjoy a adaptive refresh rate. In this way, the screen could vary from a minimum of 1 Hz to a maximum of 120 Hz, adapting according to what is on the screen to save battery. For the form factor, there would be a shift from 20: 9 to 19.3: 9 and a higher screen / body ratio. The leaks tell us about the S22 Ultra as the smartphone with the brightest display ever: there are no numbers yet, but they are rumored over 1.800 nits peak.

Looking at the front, however, although we continue to rumor of the much desired camera in the screen, S22 should bring the display forward with punch-hole of the current models. Among the specifications we also expect an ultrasonic ID sensor and a Gorilla Glass Victus protective glass.

When it comes to aesthetics, Samsung usually renews the design every 2 years. And since with the S21 series we have seen a restyling compared to the previous generation, with the introduction of a new aesthetic language for the top of the Samsung range, there will be no upheavals with the S22 series.

As happened with the last generation, only S22 Ultra will have a retro in glass, while for S22 e S22 + a glass-like polycarbonate called "GLASSTIC". Those that could change are the colors of the three smartphones. In fact, if S22 and S22 + could arrive in white, black, rose gold and green, Galaxy S22 Ultra could instead have white, black and dark red colors.

To reveal the features of the Samsung Galaxy S22 series there are the always punctual renderings of OnLeaks. The S22 series carries on the aesthetic styles of the S21 one, in particular with the photographic form rear that maintains the "traffic light" position. We find the difference in a detail, namely that the module no longer merges with the side frame, as there is a gap between the two elements.

The same goes for Samsung Galaxy S22 +, while with Samsung Galaxy S22 Ultra there would be a more radical change. The latest renderings highlight the presence of a quad camera with laser autofocus, but no longer the rectangular module to contain them. On the contrary, the sensors would be almost flush with the body, with the exception of the metal ring that surrounds them to prevent the lenses from scratching.

The renderings of the cover dedicated both to Galaxy S22 e S22 +, both to those for S22 Incredibly . The first, shown by Ice Universe, essentially show the shape shown in the renders of OnLeaks.

The other novelty of Samsung Galaxy S22 Ultra would also lie in the form factor, more squared and therefore tending to the Note series, as well as by the integration of the S Pen (which we talk about in the section "Hardware“) Complete with special slot in the phone case. Recall that the S21 Ultra also supports the S Pen, but without a hole in the frame, therefore it needs a special cover to carry it with you. But since the S22 Ultra will be the heir to the Galaxy Note series, Samsung has well thought of compensating for this lack of the S21 Ultra.

Everything seen so far regarding Galaxy s22 ultra, which in the past few hours revolved around renderings, is now confirmed by the first live images, shown by Jon prosser e Ben Geskin, where we can see the similar Note frame mixed with the S series, but also the housing of the S Pen, also shown. The camera area also actually looks as imagined and therefore we can finally say that we are close to the final version.

According to the latest rumors, the series consisting of Samsung Galaxy S22, S22 + and S22 Ultra will bring with it a change not of poco bill. Contrary to what we have seen so far, almost all of the world S22 will be moved by Snapdragon 898 Qualcomm invoice. Made with 4 nm manufacturing process by TSMC, the SoC should contain a Kryo 780 octa-core CPU with the new ARM v9 architecture (1 x 3,0 GHz Cortex-X2 + 3 x 2,5 GHz + 4 x 1,79 GHz) and Adreno 730 GPU. As for the memories, we expect cuts that reach a maximum of 16 GB of RAM LPDDR5 e 1 TB of storage for the maximum model.

Let's talk now aboutExynos 2200, which Samsung is working on but whose availability will be far less than expected. According to rumors, the proprietary chipset will be adopted exclusively in Europe, even if the reason for this reason is not known. Trying to speculate, we know that the Exynos 2200 should be 4 nm and with a new octa-core CPU (1 x 2,9 GHz Cortex-X2 + 3 x 2,8 GHz + 4 x 2,2 GHz). But the real news would be there AMD GPU, for the first time on smartphones, with a clock of 1250 MHz and technology of ray tracing.

Here, precisely because of its innovation, Samsung may have decided not to risk in proposing such a new SoC all over the world. Also because for years the community has complained how the Exynos solutions are often behind the Snapdragon ones in terms of performance but above all of consumption. Furthermore, the company would have encountered manufacturing difficulties and therefore there may be fewer Exynos chipsets than expected, also due to the ongoing semiconductor crisis.

Like the S21 Ultra, too Samsung Galaxy S22 Ultra will have full support for the S Pen, thanks to the Wacom technology integrated into the screen. This time, however, the stylus will be incorporated into the body in full Galaxy Note style, as revealed by the first live photos.

Instead, the charging standard seemed to increase. After being criticized for not being up to par with rivals such as Xiaomi, OPPO and Huawei, S22 Ultra would be able to charge a 45W, a power that would allow him to reach 70% in 35 minutes. On the contrary, the two models S22 and S22 + would stop at the usual ones 25W. We will surely find the wireless charging, even the reverse, as well as the policy of not offering a charger in the box.

Since it will arrive at the beginning of 2022, the triptych consisting of Samsung Galaxy S22, S22 + and S22 Ultra will only be based on the next Android 12. It will be interesting to see if Samsung will embrace its new aesthetic style as well Material U. This novelty will allow Android users to further customize the graphical interface, choosing the various colors of the UI also based on the selected backgrounds. In addition, new security features will be added, such as the ability to block microphone and camera for your privacy. A version of Android that will be enriched and customized again in the future One UI 4.0.

From a photographic point of view, there were rumors of an alleged collaboration with Olympus, a well-known Japanese photographic production house. A partnership that cannot fail to bring to mind what has been done by Huawei with Leica, I live with Zeiss e OnePlus with Hasselblad. But the reality is that the Japanese house would have denied this indiscretion. Also, differently from the initial rumors, the S22 series would not use a sensor from either 200 MP nor one camera below the screen.

Another noteworthy novelty would be the use of a new one optical sensor stabilization. A feature that we have seen recently adopted on the iPhone 12 Pro Max and that we find on the most recent Sony mirrorless. The advantage would be a more effective stabilization and less prone to artifacts, as it would be the sensor rather than the lens that moves during stabilization.

Initially it was speculated that the new Samsung Galaxy S22 range could arrive on the occasion of the MWC 2022 in Barcelona, ​​but in reality the8 February, According to Jon prosser. This would be the expected date for the Unpacked event, the same day pre-orders are due to start. The actual sales, on the other hand, would be scheduled for February 18.

The price with which the Samsung Galaxy S22 series models will be offered remains a mystery. But most likely they should not fall below those of the S21 series, which starts from € 849 to € 1.529 for the Ultra model. Surely, what we will see most frequently on the shelves will be the basic model, which never before would have a primary role in distribution. In fact, it seems that Samsung will produce as many as 20 million copies of the S22, that is 60% of the total production of the entire range. It is clear that Samsung wants to push a lot for the compact solution, which it seems to believe not poco. And this opens up a scenario that could also see an advance release of this model compared to the other two.

Honor 60 and 60 Pro: everything you need to know