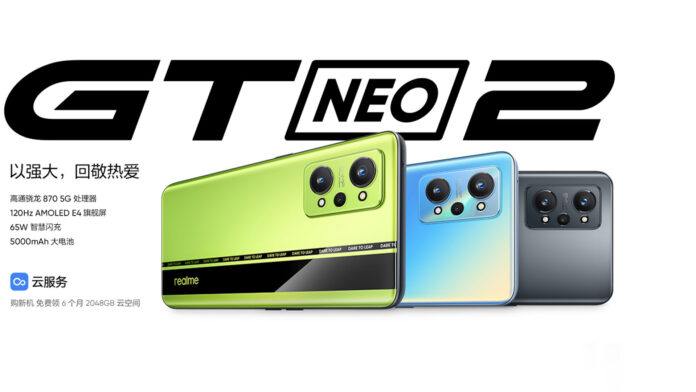 When it comes to smartphones from Chinese brands, in recent months it seems that time has passed at double the speed. This is because the various companies are already planning new models for the next round lately, as happened to Redmi and how it also happened to Realme. The Asian company has already launched the new one Realme GT Neo 2: Here we explain everything you need to know about the specs, price and availability of the new addition to the series.

Upgrade 15 / 11: Realme GT Neo 2 arrives in Italy. Find all the details directly at the end of the article.

Realme GT Neo 2 is official: all about the new top-mid range with a look at gaming

Compared to the previous models of the GT series, the new Realme GT Neo 2 sports a design more in line with the latest OPPO and OnePlus top of the range. In particular for the camera module, always rectangular in shape but with a sensor arrangement reminiscent of the OnePlus 9 and Find X3 series.

The Asian company then showed off the imagination to choose the colors of the GT Neo 2. Starting from the version BlackMint, characterized by a back cover with double coloring: the back is in a not too saturated green, with a vertical black stripe. In addition to this, a more “standard” livery was also chosen with an iridescent blue tending to yellow. Finally, there is also a version Pure Black by glass AG.

From the previous indications, there would also be a version AMG (inspired by Mercedes-AMG GT R, in fact) totally in green, but it has not been presented. It is not excluded that it can reach this point on the Global market.

But this will not be the only novelty. In fact, we have an even more fluid and performing panel than the first generation. In addition to a refresh rate a 120 Hz (variable between 30, 60, 90 and 120 Hz), the manufacturer has gone further with a sampling of the touch at well 600 Hz, a 67% improvement over its predecessor. Almost a record in the smartphone field, second only to the 720 Hz panel seen on the last one Red Magic 6S Pro.

As for connectivity, the new GT Neo 2 is equipped with well 11 antennas placed at 360 ° for the entire smartphone, which will always be able to guarantee excellent coverage. Peculiarity of this model: it seems the 3,5 mm mini-jack port is missing, but there will be stereo speaker with Dolby Atmos Gaming support.

To the super charging and the other features must also be added a record heat dissipation. In fact, thanks to an 8-layer system, of which a small plate with diamond particles, a vapor chamber and also a 3D graphene layer customized by the brand. All this produces a dissipation for an area 17.932 mm², which according to Realme is the first in the sector.

On the software side, we still find Android 11 customized with the Realme UI 2.0, but the brand has announced that from October 2021 it will be able to be updated to the Realme UI 3.0. As with the models in the range, it also supports enhanced mode GT 2.0.

For the camera, as already mentioned, we are faced with a triple module. And the sensors chosen are basically almost the same as those of the current GT Neo, with 64 MP for the main one, 8 MP for wide angle and one 2 MP macro or monochrome. For the selfie camera there is a sensor from 16 MP.

In addition to the standard Neo 2 model, there is also a GT Neo 2T version: this is the version moved by the MediaTek chipset Dimension 1200-AI, the same Soc used for OnePlus North 2. For all the details on technical specifications, price and availability, please refer to the dedicated article (you can find it here).

After leaving China and having already landed in some Asian markets, Realme GT Neo 2 arrives in Italy. The smartphone debuts at the price of 449€ e 549€, respectively for the 8/128 GB and 12/256 GB versions. The marketing will take place during the Black Friday period and for the occasion the device will be discounted at 369€ e 449€. The device will go on sale through the official website, Amazon and major consumer electronics chains.

A price that places it in a price range that is not easy to attack, given that with the Snap 870 there is Motorola Pro Edge 20 but also and above all POCO F3 which is around € 300.