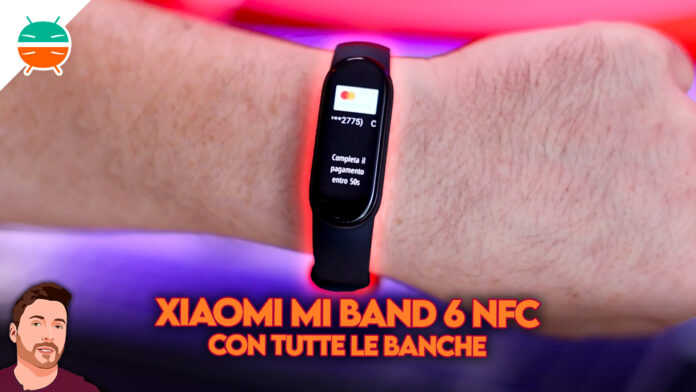 The Mi Band 6 is officially arrived in Italy. And even if by now we have already known the standard model thoroughly, those of Xiaomi have decided (finally) to introduce a new version of the most famous smart band in the world also in the Bel Paese. And the Xiaomi Mi Band 6 with NFC, that is the model with which payments can be made which, however, currently suffers from a great limitation: the supported banks from the Chinese company's new smart bracelet are very limited.

So the question arises: how to use the Xiaomi Mi Band 6 with all banks (even those not officially supported)? The answer is simple, fast, intuitive and free: Curves.

And if you don't know Curve don't worry, in this guide we will explain you step by step how to make Xiaomi Mi Band 6 compatible with all banks, how to add a credit card to the company's smart band and, above all, how to pay.

Xiaomi Mi Band 6: how to pay with all cards (even with incompatible banks)

Although currently the Xiaomi Mi Band 6 NFC is compatible exclusively with Mastercard payment cards based on the Nexi circuit, in reality there is a trick with which any credit or debit card can be associated with the smart band of the Chinese company: in this way the Xiaomi Mi Band 6 NFC will be compatible not only with Mastercard, but also with Visa and with cards issued by any credit institution.

The procedure is very simple and has only one name: Curve. The peculiarity of this free platform is its universal nature: Curve is a service that will play a fundamental role with the Xiaomi Mi Band 6 NFC and that will unify all your debit and credit cards in a single payment method.

With Curve you can pay with a single payment method, and the payment can be made either through an application, through Google Pay and Apple Wallet, or a real one. physical card that you will receive after registering, totally free.

Using Curve is very simple: just associate one or more cards to the platform, pay using the card you will receive for free and select the payment method on which you want the purchase to be charged.

But not all. The convenience of this platform is that you can decide, even after the purchase, on which associated card to charge the purchase just made. Also this service has a free plan (the one we tested) and by registering via our link you will have 5 euros as a gift and a 1% cashback.

How to add a card to Xiaomi Mi Band 6 NFC

Once you have received the physical Curve card, or if you are in possession of a card issued by a bank compatible with the Xiaomi band, add the contactless payment method to the Mi Band 6 NFC it's really that simple.

All you have to do is start the Mi Fit app, tap on the item relating to the Mi Band 6 NFC and scroll down: just as happens with the Alexa association, the bottom row will contain the entry "Map"That you will need to select.

Once tapped on the icon, to add the credit or debit card to the Xiaomi Mi Band 6 NFC just follow the wizard: it is essential to have a physical card, of which you know the number, the expiration date and the code. of protection.

There are two activation methods, both very simple: you can manually enter all the data, or you can use the camera to take a photo of the card and let the text recognition system integrated into the application do the work.

This is precisely the fundamental factor for the payment security with Xiaomi Mi Band 6 NFC: some credit institutions may require the PIN of the associated card to be entered at the first payment but, for example, this does not happen with Curve.

In a nutshell, the activation of the Mi Band 6 NFC protection code will not only prevent third parties from making authorized payments with the smart band, but will ensure that it is possible pay with the Xiaomi Mi Band 6 NFC even if it is not connected to the smartphone.

In any case, once this security function is activated, to pay with the Mi Band 6 NFC just swipe to the left on the main screen, choose the card with which you want to make the payment (in our case, that of Curve just added), tap the button that will appear in the lower area of ​​the display and bring the smart band close to the POS within 60 seconds from activation.

Xiaomi Mi Band 6 NFC it is compatible with any POS equipped with concactless technology.

How to use Xiaomi Mi Band 6 NFC with all banks

To use Xiaomi Mi Band 6 NFC with all banks, you need to register for free with CURVE, associate your card with the platform and add the CURVE card to the Mi Fit app.

To pay with Xiaomi Mi Band 6 NFC, once the card has been added, simply swipe to the left, activate the payment and bring the arm to the contactless POS.

Is it safe to pay with Xiaomi Mi Band NFC?

Yes, the smart band integrates a 6-digit security code that will be needed to enable contactless payments.

Does contacltess payment work even if the phone is not connected to the band?

Yes, this can be done by unlocking the band via the 6-digit security code.

Will Xiaomi Mi Band 6 NFC be compatible with all banks over time?

In some time certainly, but probably the times are long. For now the only solution is to use Curve

Who has VISA and not Mastercard, how can pay with Xiaomi Mi Band 6 NFC?

By adding your card to CURVE, Xiaomi Mi Band 6 NFC will become compatible with Mastercard, VISA, even if not Nexi cards

Xiaomi Mi Band 6 NFC has been available in Italy since 14 October at a sale price of €54,99 but, through the coupon you find below, you can buy it at a discount at 43,90 euros.

Click here to join Curve for free. You will receive 5 euros as a gift and a 1% cashback on each of your purchases!