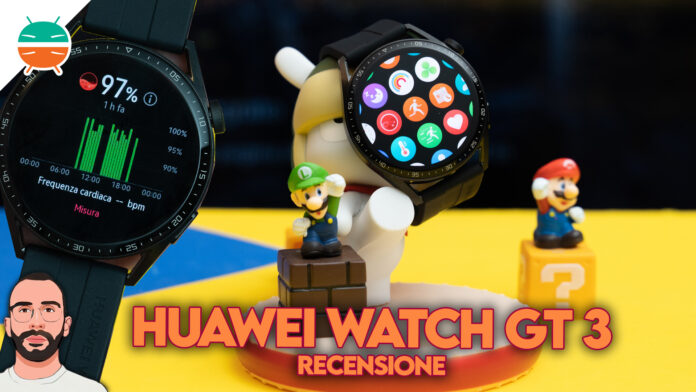 A few months I spoke to you personally about the Watch 3 PRO di Huawei, a device that I liked a lot, certainly with some shortcomings, but with a price that personally had not impressed me.

Huawei, for as long as I can remember, is always very attentive to feedback from its customers and this Watch GT 3 seems to me to be a product born from listening to criticism: it is cheap, it maintains almost the same design as its older brother, and it is very light. I tell you about it in my review.

As I said already with the Watch 3 Pro, the first feeling is wow, the display will make you fall in love from the first start. I got to try the version from 46 mm, but this GT 3 is also available in version da 42mm for slightly smaller wrists. The design is very accurate, the ring nut remains in aluminum and the back in polycarbonate.

Huawei's offer is quite wide in terms of colors and finishes: the price also varies depending on the model you choose, but be aware that the window varies from 229 to 329 € which, with Huawei's usual launch promotions, are reduced to much less if you think about the economic value of the gifts you receive.

However, there are five variants: black silicone strap (like mine on test), brown with strap in balls, white with strap in skin, and then strap Milanese with gold or chromed steel finishes.

What unites, in any case, each variant of the smartwatch is the extreme care in the assembly: the aluminum bezel is quite sturdy, and the details such as the screen-printed logo on the rotating bezel make us understand how the company cares about taking care of it. the smallest details.

With a weight of about 70 grams including the strap, Watch GT 3 despite its important dimensions is not at all annoying when worn on the wrist. There case is about 11mm thick while the straps are the classic 22mm, easily detachable and replaceable given the standard attachment.

Il , then, is the most beautiful gem in my opinion of this Huawei Watch GT 3: 1,43 "with a resolution of 466 x 466 pixels on a type panel AMOLED that's what his identity card shows. In practice it means that we are facing a panel with a very high brightness and incredibly balanced colors.

If I really had to complain about something about this display, I would do it with the oleophobic treatment: the display is finished with a glass that seemed rather resistant to me, the fingers slide well on the touch but unfortunately the captured fingerprints are really annoying and for a maniac of the care like me are an incredible obsession.

Having said that, the construction sector is noteworthy, and we do not realize that we are dealing with a mid-range and not a top as, instead, is the Watch 3 Pro.

At the hardware level, however, the difference with the superior model is more evident; Huawei GT3 has to deal with some sacrifices, among all the Wi-Fi or NFC (which however due to some limitations with HarmonyOS it is not yet usable for payments even in the most expensive models).

As regards the SoC that moves this watch, Huawei has made public very little information and details; we know it's there internal memory equal to 4GB (which actually is poco less than 2GB available for loading music) and a memory RAM equal to 32MB, a value that left me a bit perplexed to tell the truth, but in fact in everyday use the watch has always been hyper reactive, fast, and free from any block.

You can answer calls directly from the Watch GT 3 e speak hands-free; the audio coming from the speaker is of excellent quality, the sound is clear and the voice is perfectly clear and audible. In any case, as always, I do not recommend using it because it is rather inconvenient, rather it is useful to combine earphones and respond from the Watch.

Huawei Watch GT 3 is also waterproof with a manufacturer's warranty up to 5 ATM. He doesn't support NFC, so no cardless payments for him either.

Harmony OS arrive in version 2.1 on the Huawei Watch GT 3, and we talked about it quite in depth already in several situations. The system is full of features for fitness and monitoring of sports activities, as well as providing the ability to measure body temperature, blood oxygen saturation levels and heart rate.

The accuracy in the monitoring of each single value is quite high; I compared the values ​​of the SPo2 measurement with a finger oximeter and the values ​​are identical, as well as those of the body temperature which differ by about 0.7-0.8 degrees centigrade compared to a traditional mercury thermometer.

Le sports mode supported are over 100 (running, yoga, swimming, step and many others) and among the nice features we also find the professional coach for running, that is a system capable of evaluating our athletic abilities by calculating the averages of our workouts and consequently providing (automatic) workouts to improve our sports performance.

And for the more adventurous or for those who usually run to new places, thanks to the function Back Route the smartwatch will provide you with directions to return to the starting point if you are lost for some reason.

Huawei Healt, available on iOS and Android
1 of 6

To be honest I found the software more limited than the Watch 3 Pro reviewed weeks ago; the inability to respond to notifications received is always present, and the inability to download third-party apps from the App Gallery is added, which here allows us to download poco more than a dozen apps, but where there are no noble names or really useful apps.

I tested it SmartWatch with either iOS that with a smartphone from Huawei, the Nova 9 and in the smartphone apps I found differences: the biggest limitation is that on the iOS app it is impossible to transfer music to the Watch, and it is also impossible to reach theApp Gallery to try some of the apps available. In addition, the voice assistant of the smartwatch requires pairing with a device with EMUI 10.1 or later, and that further solidifies Huawei's plan to create its own ecosystem from A to Z.

This is a strongly limiting aspect, but I am sure that the target to which a smartwatch like the GT 3 is in possession of an Android device, in almost all cases.

Here, the battery is one of those things that an Apple Watch owner like me would like to have at all costs: 455mAh is the unit present here, which is able to offer an exceptional autonomy up to 14 days, and for the first time I was able to ascertain the truth of what the company said.

When used on a secondary smartphone, with few notifications active and all sensors active, the Watch GT 3 actually consumes about 5% battery per day, and I'm not kidding. The situation is different when doing sports activities and used in conjunction with a smartphone that receives an average of 3-400 notifications per day, where the autonomy of the Watch GT 3 is around 12-14 days.

As mentioned at the beginning, the selling prices start from 229 to 329 € for the 46mm versions and steel strap: the version I tested in the tests is the standard with a silicone strap and costs € 249 from 46mm.

Now, without a doubt we are not talking about very low figures, but there is an important aspect to evaluate: the competitors, on the market with figures ranging from 170 to 220, do not offer an assembly and construction at the levels of this Watch GT 3, but above all, they do not have a company like Huawei behind them which, as it has already shown in the past, is capable of overturning a product with a single software update.

Mine overall judgment for this smartwatch it is positive, because it is well built, has a beautiful design and the price net of discounts and gifts is far more competitive than all the products in circulation. There is always no NFC for payments and the ability to respond to notifications, but now in this price range it is a feature to which I have personally "given up". PROMOTED!