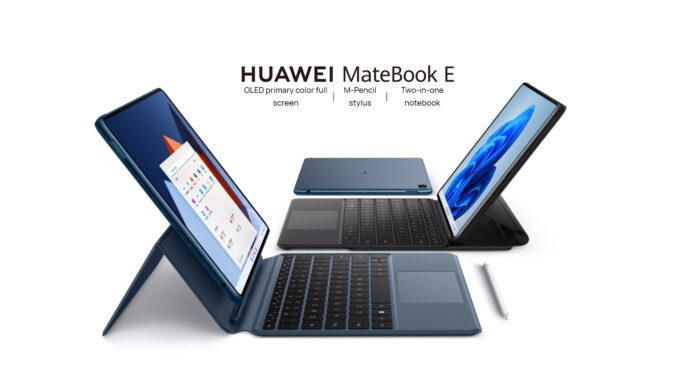 The convertible Huawei MateBook E makes its official comeback with this edition 2021. More than two years have passed from the previous model but Huawei has decided to renew the 2-in-1 proposal. The Huawei notebook with the soul of a tablet was presented at today's event in China, together with Watch GT Runner, Mate X2 Collector's Edition and the new VR Glasses. But let's see in more detail how the new convertible of the Asian house is substantiated.

As a good convertible, it can obviously be detached from the keyboard and used as a tablet thanks to the panel touch. In addition, there is also the help of the stylus to improve productivity for all creatives. The I / O department includes a USB Type-C port with support Thunderbolt 4 for faster data transfer e DisplayPort.

The technical configurations on which the Huawei MateBook E 2021 is based include 11th generation Intel Core platforms. To be exact, there are two models, with CPUs i5-1130G7 e i7-1160G7, in both cases with integrated graphics card Intel Iris X. Memory side we find 8 / 16 GB of RAM LPDDR4X e 256 / 512 GB of PCIe NVMe SSD storage. Connectivity is managed by support for Wi-Fi 6 and Bluetooth 5.1 standards, while power is supplied by a battery from 42 Wh rechargeable a 65W.

For video calls there is an 8 MP front camera, while at the rear there is a 13 MP sensor. The multimedia sector is then enriched by four speakers, paired with four microphones to capture your own voice. Inside the PC there is also a refurbished dissipation system, containing the smallest fan ever used by Huawei.

Being notebooks based on Microsoft solutions, Huawei MateBook E 2021 is part of the new one wave of laptops with Windows 11. Proprietary functions are added to the OS, such as Huawei Share, Computer Manager and other additional tools.

Being a 2-in-1 convertible, Huawei MateBook E 2021 cannot fail to be accompanied by additional accessories for its 360 ° use. The most essential is obviously the keyboard with magnetic coupling, which can be used when you want to type more comfortably with an angle of 127 ° as well as acting as a protective cover.

As anticipated, the Huawei notebook works in conjunction with the Huawei M-Pencil second generation, with a hexagonal shape and an improved grip.