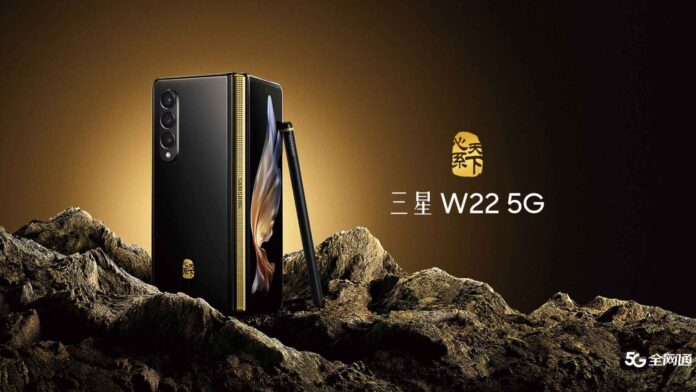 If you think that Galaxy Fold 3 e 3 Flip are the best that Samsung can offer in folding, you have not yet seen the W series and its next exponent. Indeed, in order to keep Xiaomi and Huawei at bay in China in the folding market, the Korean giant has launched Samsung Galaxy W22 5G, new luxury folding.

Samsung Galaxy W22 5G: all about the new folding designed for China

Before explaining what the new will look like W22, let's refresh what the W range represents, especially in China. For years, in fact, Samsung has historically produced a series of leaflets clamshell then they have become foldable in recent times, designed to provide an expensive and reliable product for the most demanding businessmen, who have always been fans of "clamshell" mobile phones. What if the first experiment W21 5G last year went well, a lot is also expected from the new model.

The design of the new Samsung Galaxy W22 it is in the form almost identical to the Z Fold 3, but the premium touch is noticeably more pronounced. In fact, in addition to the golden hinge (we do not know if in real gold), there is also the golden plate bearing the logo of China Telecom, which commissions this smartphone. The display remains the same since 7.6 " internal Dynamic AMOLED, while the external one is instead from 6.2 ".

The chipset is also the same used for the Fold, that is Snapdragon 888. We also find 16 GB RAM and 512 GB of storage, while the battery remains from 4.400 mAh rechargeable at 25W. Not missing Integrated S-Pen.

For the camera, here too we find a confirmation of the younger brother (by cost) with 3 modules from 12 + 12 + 12 MP, while the external selfie camera remains at 10 MP and the internal one, below the display instead it is from 4 MP.

The new folding Galaxy W22 5G therefore arrives on the market at a price of approx 2.284€ (16.999 yuan), which is actually almost double what Fold 3 costs, but considering the materials and the target, they all fit. As already mentioned, it is a device designed only for China, at most for the Far East, so don't imagine it here in Europe.

OPPO is working on its smartphone chipset: that's when ...