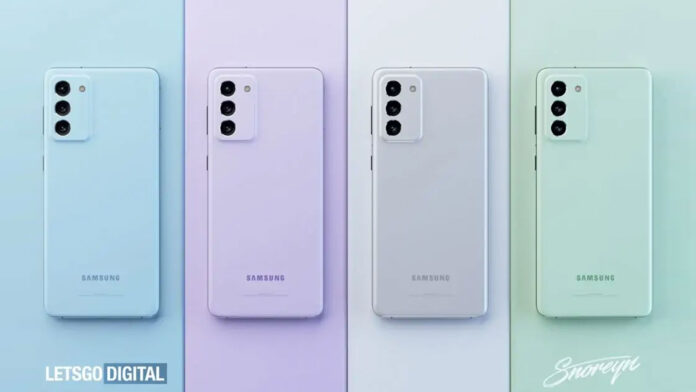 After the excellent feedback obtained from the first model, the Korean company prepares the debut of the next Samsung Galaxy S21 FE. Needless to say, we already know a lot about this smartphone, as per the "tradition" of Samsung-themed leaks. Just think of the series Galaxy S21, of which it was even out a review more than a month before the presentation. And just by reconnecting to the S21 family, this new Fan Edition will further expand the choice. Let's see what its news will be, thanks to the rumors that are already circulating on the net.

14 / 10 Update: the ballet continues around the release date of Samsung Galaxy S21 FE. Find all the details in the "Price and release date" section.

Thanks to the renderings published by the usual OnLeaks, we can already know how the Samsung Galaxy S21 FE will look aesthetically. And just as with the last generation, the second model will also inherit the visual language of the previous S21 models. At first glance, it looks like a smartphone identical to the S21, both in front and behind. On the front we have an Infinity-O solution, that is with punch-hole central, which TENAA confirms as having a screen AMOLED dish da 6,4 "Full HD + (2400 x 1080 pixels) with refresh rate a 120 Hz, 480 PPI, for dimensions of 155,7 x 74,5 x 7,9 mm.

According to the renders, it seems that the S21 FE will have slightly less optimized frames than the S21. While on the side we find a metal frame, on the back the back cover should be in "glasstic", or a polycarbonate glass-like with a matte finish. The photographic module is similar to S21, but it does not join the frame, but normally comes out of the back cover.

for colors, insider Ross Young has stated that they will arrive in Gray, Light Violet, Light Green and White, thus marrying the colors of the current S series. And this is supported not only by the 3D renderings by leaker Evan Blass, but also in the first image render for the press, which shows them even thinner than expected, while confirming the design.

The hardware sector of Samsung Galaxy S21 FE could carry on what was done with S20 FE, or a double choice with SoC Snapdragon or Exynos, differentiated by the 4G / 5G modem. In the first case, the data appeared on the network reveal the use of Snapdragon 888. This chipset would be available in both Europe and the United States. In the second, however, S21 FE 5G would also make use of theExynos 2100, so duality is likely to continue but will be a “regional” issue for distribution.

From the leaks we learn that the battery will have an average module from 4.500 mAh, always confirmed by the TENAA certifications. A battery that should support fast charging a 25W (11V, 2.25A), complete with charging wireless from 15W even in reverse mode. But even then, the charger shouldn't be included in the package. On the connectivity side, in addition to the obvious 5G support, the certifications reveal the presence of Samsung Pay and support for Wireless DeX, as well as stereo speaker Dolby Atmos.

From a photographic point of view, we do not expect changes compared to its predecessor. We should find a scaled-down module compared to the S21, whose configuration is almost the same as the S20. As a result, S21 FE could hold a triple 12 + 12 + 8 MP, complete of wide-angle lens e telephoto.

There continues to be great uncertainty about the exit date of the new Samsung Galaxy S21 FE. It should have been presented between July and August in conjunction with the leaflets Z Fold, Flip 3 and smartwatches Galaxy Watch 4 and 4 Classic. To confirm its existence there was also the support page on the Samsung's German site. In the following months, however, an insistent rumor appeared that suggested its cancellation. This is because the company would have reassessed its plans, by virtue of the fact that the new folds are selling well, especially Samsung Galaxy Z Flip 3. Not to mention that the semiconductor crisis: S21 FE would have used the same SoCs as the S21 series and that we find right on the two new leaflets.

Although a Samsung Unpacked will be held on October 20, multiple sources claim that Samsung Galaxy S21 FE is expected to be unveiled theJanuary 11 2022. It is not clear if it will be launched together with the Galaxy S22 series or if this will arrive in the following months.