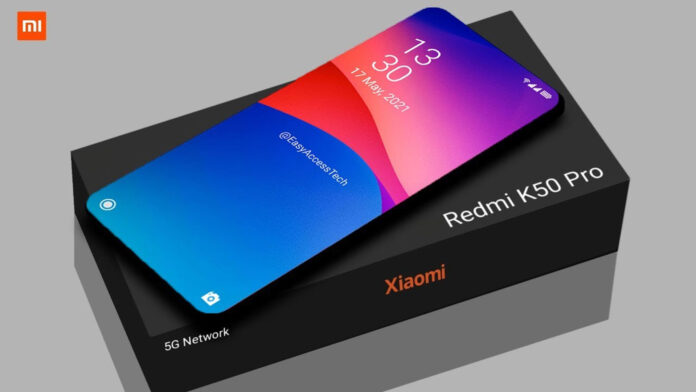 Redmi K40, in all its declensions, it was certainly one of the most competitive and popular smartphones of this half of 2021. But for the same Redmi it's already time to think about the series K50: between indiscretions and rumors we try to trace the list of features of the next models of the family.

Upgrade 14 / 10: some concept renderings dedicated to Redmi K50 appear, but they do not convince. Find all the details in the article, directly in the "Design and display" section below.

Redmi K50: everything we know so far

Now that the time is only ripe, the time has come to take stock of the situation and collect the various leaks about the series Redmi K50. The render you see above is clearly fake, but it is still a first attempt to trace the design of the range. At the proposal of dubious images, a creator has published some images dedicated to the device. It is a concept render even if it is not known if they are based on revelations from the inside or if they are the result of the imagination; however, he leans towards the second hypothesis since such a radical style change for the series seems too unrealistic. We leave you the renderings out of curiosity and we will update this section as soon as there will be news regarding the design of the series Redmi K50.

Moving on to the rest of the features, according to the well-known leaker DigitalChatStation Xiaomi would be working on new materials for the back cover of their devices (including Redmi) and should present a solution similar to glass but new, a sort of GLASSTIC, probably to favor the wireless charging. This is only an indiscretion, but therefore it seems that we could find this news on the K50 family.

Similarly to the previous generation, once again we should have displays AMOLED but always with side ID sensor. Most importantly, all three versions should be equipped with the technology AMOLED E5, the latest and most advanced standard.

For the screen size there is a rumor of a solution from 6.7 "Full HD + a 120 Hz, although there may be a chance to see at least the higher model in resolution 2K +. The central punch-hole, presumably the same 2,8mm diameter mini solution.

And if for Redmi K50 e K50 Pro we assume that the panels can be flat, after the various requests from Mi Fans, it is very likely that at least on K50 Pro + you can finally have a curved display, given that the type of panel allows it and is often used like this, according to what the leaker says Bald Panda.

Obviously for the range Redmi K50 we expect a base model in the medium-high range, but also one or more top versions. According to the latest rumors revealed by a Chinese insider on Weibo, the triptych should stand out mainly for the chipset on board, the photographic sector and the charging technology.

Consequently, it is clear that we will find the future on board the Pro and Pro + models Snapdragon 895 / 898, Qualcomm's next high-end solution. On the other hand, there are no details relating to the battery capacity of the Pro variant, perhaps once again a solution from 5.000 mAh but with recharge from 67W.

Meanwhile, the well-known group Xiaomiui supports the hypotheses by reporting that Redmi K50 Pro would have appeared in the MIUI code with the name Ingres. And for this model, the presence of the Snapdragon 8450, that is the aforementioned, would be confirmed Snapdragon 898.

Looking to the older brother Redmi K50 Pro +, in addition to the chipset, second Bald Panda we will most likely have a battery from 5.000 mAh, which goes hand in hand with an exclusive feature such as super charging from 120W, at least according to rumors: the same power as Xiaomi Mi 10 Ultra e 11T Pro.

Among other innovations, there should even be the debut of a waterproof model with IP68 certification, an absolute first time for Xiaomi's rib. On the audio side, the rumors speak of a double symmetrical speaker.

As anticipated poco above, for the moment the characteristics of Redmi K50 are all in the making: the photographic sector should mount solutions from 48/64/108 MP with wide angle and macro, in a way not unlike what we saw for the current K40 series (respectively K40, K40 Pro and K40 Pro +).

There is no absolute certainty, but it is likely that there are no major differences for the sensors: the base model should mount a module to be 48 o 50 MP (or even 64 MP here too), while for the brother K50 Pro we are talking about a sensor from 64 MP well defined OmniVision OV64B. Eventually it would rise to 108 MP for the alleged K50 Pro +, which could also see, again according to the leaker Bald Panda, the debut of a periscope, but seen so far on Redmi.

In recent weeks there has been talk of a possible Redmi with camera from 192 MP: it could be K50 Pro + but it is good to take this news with a grain of salt and wait for official news. Furthermore Samsung recently launched its 200MP sensor, but it is highly likely that Xiaomi will hold on to this novelty for the models of the main brand.

Will there also be Redmi K50 Gaming?

Through an official survey, Lu Weibing caught everyone off guard by asking users what they expect from the successor of K40 Game, hinting that Xiaomi's rib is already thinking about a possible Redmi K50 Gaming. Obviously, there is still no confirmation and we look forward to any news.

It will take some time before we start talking more concretely about the Redmi K50 series. According to the latest rumors, the marketing strategy could be similar to what was seen with the K30 series. This means that Redmi K50 could go out to end of 2021, specifically in the month of December 2021, while Redmi K50 Pro would come further, that is, in early months of 2022.