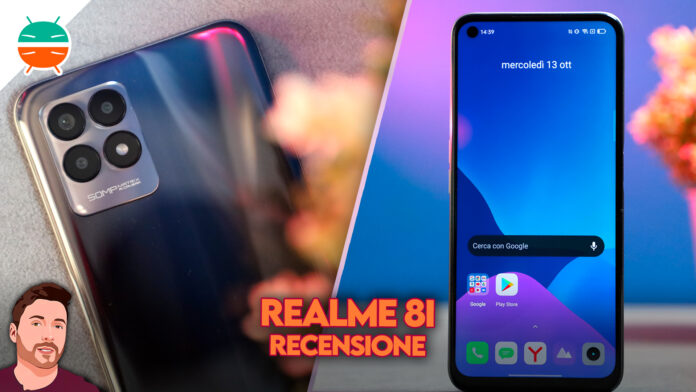 After the arrival of Realme 8 and 8 Pro and the 8 5g version, the Number series of the Asian brand continues to be enriched with two other new devices, just presented also for the Italian market. And it does so with two medium and low-range products, with very interesting characteristics: they are the Realme 8i and the Realme C11 2021. And it is the first model that we will talk about.

Because the technical characteristics of the Realme 8i they are first in the class, clearly in relation to the price at which it is sold, and not only for the new Mediatek processor and the 50 megapixel camera, but above all for the 120 Hz screen and a higher-end construction process.

The packaging of the Realme 8i it is made in the typical style of the brand. The hardcover is yellow and inside there are the typical accessories to which we are now accustomed.

In terms of design, the device incorporates the lines of the models in the current range but with a footprint similar to that of the 8s model, at least as regards the look of the camera, since we find a rectangular bumper with three sensors and a space dedicated to the information of the main room.

Large 164,1 x 75,5 x 8,5 mm - just as much as the Realme 7i - and weighing 194 grams, 6 g heavier than the previous version, the brand's new smartphone features the typical style with flat front design and curved back. , with a beautiful shaded paint: the back cover and the frame are made of plastic but with a process that, if it were not for a slightly improved fingerprint management, could deceive those who wield it and look like glass.

The colors are different, the one we received in test is the Space Black even if, to be honest, I like the Space Purple more, characterized by irregular transitions of shades, which go from purple to silver.

The front area then, is mostly occupied by the 6.6 ”screen with FullHD resolution and 120 Hz refresh rate, in which a punch hole front camera has been inserted, which uses a 16 megapixel sensor.

The grid for the ear capsule has been inserted in the upper part of the display which, mind you, will not perform any function dedicated to stereo sound: the Realme 8i it is a device with mono sound. And it's really a shame.

And while the headphone jack might be a welcome presence for some, it's important to point out that the Realme 8i it also has one big absence: IP certification. Why not, it is not a smartphone certified for resistance to water and dust.

The sampling frequency of the touch at 180 Hz is also good, which will not be the best in the market, but which stands out in this price range.

Although the company guarantees a peak brightness of 600 nits, we actually found slightly different results in our tests: when you manually set the brightness to maximum, the measured value is about 400 nits, which goes to poco less than 550 if you are in direct light and set automatic brightness.

However, there is another value that struck us: the minimum brightness. With a value of poco higher than 0.5 nit, the display of the Realme 8i it is among the most pleasant to use in the dark.

The panel used supports the DCI-P3 color space, which it manages with good accuracy, but does not natively support HDR even if in the software settings there is the possibility to activate this item with the aim of making the color space wider. reproduced.

As for the hardware, I have to admit one thing: I started very biased on the new Mediatek processor. The Realme 8i is the first smartphone I tested animated by the new Mediatek Helio G96, a 12 nanometer SoC produced by TSMC (just like all the other processors in the G9x series) that is characterized by the same octa-core GPU as the G90, G90T and of the G95, but which this time is joined by a new GPU, which is always part of the Valhalla generation produced by ARM: the Mali-G57, capable of supporting the 120 Hz refresh rate but which will hardly guarantee 120 fps for games more complex.

And never like this time, to be able to understand the performance of the new Realme 8i, you have to take a look at the benchmarks.

As you will notice from the various tests we have carried out, the performance of the new Helio G96, even if they do not scream a miracle, are among the best in the price range in which you go to insert the smartphone: in short, on paper the Realme 8i it is among the most powerful smartphones in the mid-low range of the market.

As for user experience, good Realme. The whole graphic interface works at 120 Hz and is very fluid. Micro-lags may occur if there are too many apps open, but it is more unique than rare. Overall, I never had the feeling of having little computing power available in the most common uses. And the same thing I can say about gaming: ok, you will hardly be able to play games at 120 fps, but in essence I have never had any performance problems even with the most complex titles.

The cameras of the Realme 8i there are three, but most of the time only one will be used: there is a main sensor, a macro sensor and a monochrome depth sensor. In short, no optical or ultra-wide-angle zoom.

The main camera uses a 5 megapixel Samsung ISOCELL S1KJN50 sensor with an f / 1.8 lens, the macro uses a 02 MP GalaxyCore GC1M2 sensor with f / 2.4 lens but without autofocus, while the monochrome sensor is a 2 megapixel OmniVision .

And let's get straight to the point: the software is typical of Oppo / Realme, there is an auto HDR mode and the AI ​​mode, but it must be borne in mind that the only good quality photographs are those taken without digital zoom.

In good light conditions, photographs taken with the Realme 8i they are among the best in this price range. The dynamic range is handled very well, contrast and saturation are well balanced and there are a lot of details in the shots. Things change a bit when you turn on HDR, which tends to push a bit too much on sharpness and contrast, but it must be admitted that the people from Realme did a really good job.

However, things change when you shoot at night and I tell you one thing: don't think you can take pictures in low light, without activating the Night mode.

In fact, when you take pictures with the automatic mode, the images produced will be full of noise and artifacts, elements that disappear completely when you use the Night mode: in this case it will take about 2 seconds for the shot and 2 seconds for processing. , and the results will be exceptional (clearly always evaluated according to the price range).

But if there is one modality that amazed me it is that Portrait: in this the Realme 8i it is practically unbeatable in its price range, thanks to the excellent work done by the combination of software + OmniVision sensor.

On average, the 16 megapixel front camera, capable of taking good but certainly not exceptional selfies, as well as the videos, which can be recorded at the maximum resolution 1080p at 30 fps. So no, no 60 fps and no 4K and no optical stabilization.

As for software, there is poco to say. Realme 8i is based on Android 11 with proprietary interface Realme UI 2.0, a UI that we have already gotten to know in the past.

And as usual, the first time you start your smartphone you will find several bloatware applications pre-installed but, apart from this, the whole operating system is well organized, fluid and pleasant to use.

There are the typical features to which the company has accustomed us, including the Chinese version of the Samsung edge bar, which can be activated with a swipe and which will provide a series of quick shortcuts.

Among other things, one of the gems of the Realme UI it's just theextensive customization ranging from themes, icons, fonts, Always-on displays. Let's not forget the additional features such as the assistive sphere, screenshots with gestures, split screen, game modes, the smart sidebar and much more.

It must be admitted that the battery is one of the strong points of this Realme 8i. The capacity is 5.000 mAh, supports fast charging at 18w and is able to guarantee excellent autonomy: in our tests, carried out in different work scenarios, we managed to achieve crazy results. And I'll tell you just one: we were able to play videos for over 12 hours consecutively on a single charge.

In terms of charging speed we are not exactly at the top, but it is quite normal, given the price range: with the supplied charger, the Realme 8i it is able to go from 0% to 30% in about 30 minutes, while for a full charge it will take about 2 hours and 20.

At the time of writing this review, Realme has not yet formalized the amount to be spent to take home his smartphone. In fact I am more than convinced that the official price of the Realme 8i it will be around 220 euros, probably for the 64 GB version. And yes, there are similarly priced products on the market that deliver the same level of performance, but a slightly lower camera. Then there are other models that instead of an IPS use an Amoled, albeit still at 90 Hz. In short, the new Realme smartphone is going to enter a market segment that is more fierce than ever.

The point is that the Realme 8i It is a device that does the job for which it was designed very well: it guarantees a fast and fluid Android experience, it is able to handle 3D games, it has a super battery and a camera that would be suitable even for more expensive smartphones.

It is true, however, that it also has compromises, such as the lack of an ultra-ride, a not too fast recharge and the absence of stereo sound.