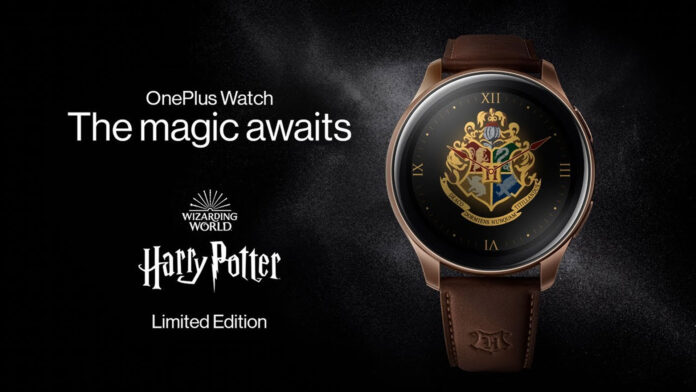 Despite the teething problems and the postponed marketing, Oneplus watch continues to be talked about and does so with the new one Harry Potter Limited Edition. The device debuted recently also in version Cobalt, a super stylish special edition that might not tempt you poco, as well as the themed one Cyberpunk 2077. But on this tour the focus is on those who want to immerse themselves in the world of Hogwarts and do so by giving a different touch to their watch on their wrist.

Like all limited editions, OnePlus Watch Harry Potter Limited Edition also stands out for offering a different unboxing experience than usual. The sales package takes up the concept behind the beloved Binary 9 and ¾ London King's Cross Station. And just like in the JK Rowling saga, here too the wall opens up and reveals the contents of the packaging (no, no Diagon Alley), with a sliding mechanism from the center of the box.

The smartwatch has a different color from the standard ones (Midnight Black and Moonlight Silver) and the Cobalt one, with a reddish-brown copper tint and a red / brown vegan leather strap. And of course, a Hogwarts themed engraving on the strap and one with the Harry Potter logo on the buckle could not be missing. The same goes for the two side buttons: on one there is the OnePlus brand, while on the other the iconic lightning bolt presents on the front of the wizard.

Clearly the theming of the OnePlus Watch Harry Potter Limited Edition is not limited to the physical aspect, but also extends to the software component. The smartwatch OS is enriched by various screens in Harry Potter sauce, starting from thestartup animation and passing through 6 watch faces pre-installed. There is one for each house (Gryffindor, Slytherin, Hufflepuff and Ravenclaw) and others with the Hogwarts logo and castle.

The same is also true for thecharging animation, with the Warp Charge occurring as if it were a spell emitted by an Ollivander wand.

OnePlus Watch Harry Potter Limited Edition is precisely a limited edition, probably also in geolocation. For the moment, in fact, the smartwatch has been announced exclusively for India, at a price of 16.999 rupees, equal to approximately 194€. It remains to be seen if OnePlus will decide to market it outside India, perhaps even in Europe.