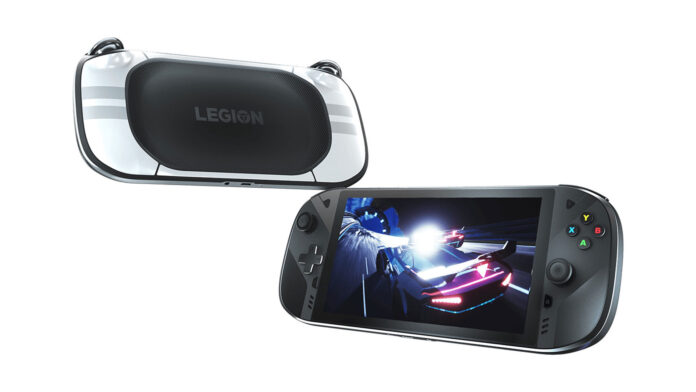 When it comes to portable consoles, the two names that jump to the thought are Nintendo Switch and Steam Deck, to which it could soon be added Lenovo Legion Play. The Taiwanese manufacturer would be preparing an expansion in the gaming universe, thanks to the know-how accumulated over time. We saw this before with the birth of the series Legion Duel smartphone and it is not so surprising that Lenovo wants to do the same in the world of consoles purely focused on the gaming world.

The images of Lenovo Legion Play are almost official, having been found by users on the net from the web pages of Lenovo Germany and MWC 2021 Japan. Taking them for granted, therefore, the renders reveal us a console very similar to the Nintendo Switch, with a large central display from 7 "Full HD HDR10 in 16: 9 flanked by two side sections dedicated to game controls. On the left is one of the two joysticks and the D-pad, as well as an additional button at the top and the Legion button at the bottom. The latter could act as an activator of the gaming mode as it happens on smartphones.

On the right, instead, in its place there is the Home button, as well as the other joystick, another button at the top and the four buttons A, B, X and Y. On both sides, then, we can see the grids for the two speakers front. By studying the body better, at the top there is an additional button (perhaps the ignition one), as well as the two (or four?) Backbones. Finally, in the lower section there are USB Type-C connections, 3,5 mm mini-jack and a microphone. We don't know yet any chipsets will move the whole thing, while the battery should be one 7.000 mAh and would not miss a doppio work of vibration.

Being a console Android, the other interesting aspect of Lenovo Legion Play concerns the interface that you see in one of the images. A appears on the screen custom launcher along the lines of other consoles, with a central row where we see various items, including the game store and the NVIDIA GeForce NOW app for cloud gaming. We can also see Play Store, Google app, browser and, smaller, other elements of the UI at the top. In addition to battery, connectivity and time information, there are icons for search, shutdown, settings, messages and more.

Will this Lenovo Legion Play ever be made?

Users were also able to find an official description from Lenovo on the net: "Designed for AAA games, Lenovo Legion Play is the first Android cloud gaming console. The console allows users to play hundreds of cloud games, stream their game library or play mobile games. Our developer program is open to all game developers. Coming soon in selected markets.".

That said, will Lenovo Legion Play ever arrive? For the moment, it is not excluded that the company's plans have changed. Already the fact that the images have appeared but that it has not yet been presented at MWC 2021 could mean a step backwards on the part of Lenovo. According to rumors, the plans saw it scheduled for 2021, but to date there is no indication of a possible presentation in the coming months.

One possible hypothesis is that Lenovo has chosen to postpone its launch due to the semiconductor crisis. A crisis that has affected the gaming world very much, between consoles such as PS5 and Xbox S / X Series and graphics cards victims of extremely limited stocks compared to market demand. However, being Lenovo Legion Play an Android console, therefore presumably with ARM architecture, it should have a Qualcomm SoC. Also because Lenovo speaks of it as a console aimed at cloud gaming, therefore not in need of extreme power