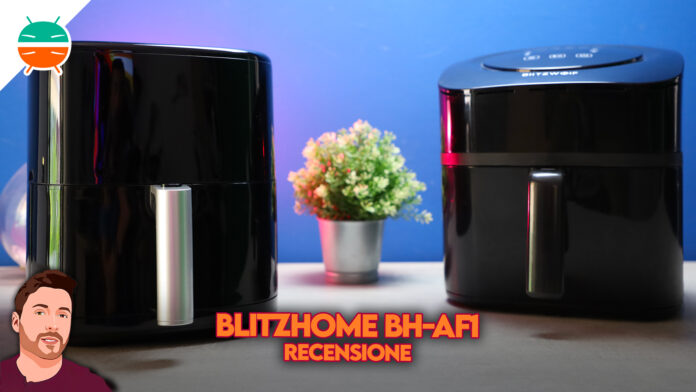 We all know air fryers. And (almost) all of us have now learned to understand its advantages. They are called "fryers", but in reality they are much more similar to a convection oven, they allow you to cook a very wide range of foods using a minimum amount of oil, and are very easy to clean.

However, few know that, as well as for smart lights, smart locks and all the new devices for smart home automation, even in the world of air fryers it is possible to find models that can connect to the WiFi network and be controlled by the smartphone.

And if there is a company that has almost acted as a "trailblazer" in the sector of smart air fryers, it is BlitzWolf, a brand that we have greatly appreciated for its "smart" products for the home and which, very recently, has decided to change its name to underline the category of its products: BlitzWolf has become Blitz Home, and its new smart air fryer BH-AF2 is the new version of the BlitzWolf BW-AF1, which we reviewed a few months ago.

BlitzHome BH-AF2 review: the new smart air fryer, which lets you cook with your smartphone

Aesthetically the new BlitzHome BH-AF2 it is very similar to the company's first smart fryer, albeit with several new features. The device continues to be characterized by a main structure and a cooking tray, which however in the new version has become much easier to wash, being composed of a single piece and a grate on the bottom that can be removed. And if even the new basket BlitzHome BH-AF2 it is dishwasher safe, there is a small note to make: compared to the previous model, the new version of the smart fryer loses 1L of capacity, going from 6L of the BW-AF1 to 5L of the BW-AF2.

The actual design has been renewed, with more elegant and simple lines, and the upper area is characterized by a new control panel that not only becomes flat and easier to wash but which, in addition to the buttons for cooking management, integrates 8 cooking programs for different types of food: in short, despite being a smart air fryer, the BlitzHome BH-AF2 however, it can also be used without turning on the smartphone.

All the buttons are touch-sensitive and the typical LCD display continues to be present in the center with which you can control all the settings relating to cooking.

The whole fryer is made protected by a layer of very shiny polycarbonate, which is very afraid of fingerprints and grease: given the nature of the product, I would have preferred a matte finish, to avoid having to continually remove various fingerprints from the entire surface.

As for smart functionality, let's get straight to the point: new brand name, new application for iOS and Android, but the same substance. There BlitzHome BH-AF2 it is managed by the BlitzHome app (the old one was called BlitzWolf) which, although it has a new and more beautiful graphic interface to look at, integrates the same identical features seen in the previous version.

In reality, those who already know the Xiaomi Home app well, in BlitzHome will not notice anything new: since the process of associating the smart air fryer, you understand that you are using a sort of "rebranded" version of the excellent Xiaomi app .

In any case, after pairing with your home wireless network, you can use the application to set cooking times and temperature, but also to switch the device on and off. And even if the application has changed compared to the previous model, even with the new version there is a beautiful confirmation: lag is practically absent, and each command is immediately processed by the device.

Through the application you can also choose between 6 pre-set cooking modes, although my advice is not to rely too much on these settings, especially as regards cooking times: it is important, from time to time, to pause the fryer and check cooking removing the basket, paying close attention to its temperature (it is very hot), and checking the food inside.

Unfortunately, to date, I have not been able to associate the BlitzHome BH-AF2 to any digital assistant. The company hasn't released the integration for either Google Home or Amazon Alexa yet, so sadly I haven't been able to test this feature.

But if the smart experience is practically unchanged compared to the previous generation, the innovations that introduces the BlitzHome BH-AF2 in terms of technical characteristics and cooking process they are different. First of all, the absorption changes, which becomes 1500W, and also in terms of noise the new model is decidedly more optimized than the previous one: the company declares 20% less noise and I must say that it is a rather value. truthful. If the BW-AF1 was already silent, now the BlitzHome BH-AF2 it becomes practically imperceptible, even during cooking.

The maximum temperature that the air fryer can reach continues to be 200 °, but what really makes the difference is the new ASH 2.0 technology, which guarantees cooking that is not only more efficient, but decidedly more uniform. From this point of view, those of BlitzHome have done a really good job.

Personally, now I cook anything with the air fryer. Not just frozen fries, but bacon, burgers, sausages and many other foods as well. And ok, now I'm getting hungry.

In short, it is useless to emphasize how many dishes it is possible to cook with these particular fryers, but the important thing is to always keep in mind that ot always with the air fryer you can cook without oil. In the case of frozen fries (and all pre-cooked foods) the use of oil can be avoided, but if you want to cook something not pre-fried, you should add a teaspoon of oil, to make everything more crunchy and delicious.

During cooking, both on the display and via the application, you will have access to a countdown with which the times will be monitored and at the end of which the fryer will emit a beep and the application will send a notification to the smartphone.

But it is at the end of cooking that one realizes the convenience of such a product, and it is a very practical convenience that is independent of the delicacies that can be cooked with it: the cleaning. The need for washing is practically minimal and considering that those of BlitzHome in the new model have reduced its components to a minimum, practically inserting only a small metal grate, cleaning this air fryer becomes even easier.

The price of the smart air fryer BlitzHome BH-AF2 is 119.99 dollars, but through the coupon (found below) you could take it home discounted at 76.00 euros for the smart version and 68.60 euros for the traditional one. And ok, this is a new model, but my final considerations do not change compared to the old one: it is probably one of the best air fryers around, definitely better than Xiaomi's one for example.

It is super quiet, its smart features make cooking and temperature and time control much more convenient and, of course, the basket is slightly less capacious, but thanks to the new ASH 2.0 technology, cooking is much more uniform and faster.

Too bad for the lack of integration with digital assistants: ok, probably activating or deactivating the fryer using the voice would not revolutionize the user experience, but if a product is defined as “smart”, it must be so in all respects.