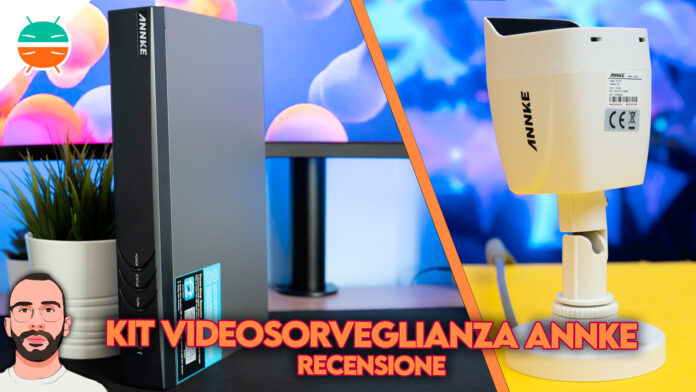 In my review of the ANNKE NC400 I have given you a hint and a smattering of how a more complex video surveillance system worked specifically than the usual Smart IP Camera from 50 euros present on Amazon; as already stated, those who rely on a solution like this are aware that the cost will be higher, but it is equally true that the yield is totally different.

Annke sent us hers on trial Digital DVR 8-channel with 4K resolution as well as an economical model compatible with a solution like this. I'll tell you about them in detail.

The packaging of the Annk's DVRand is well supplied, and contains everything you need to be able to put the recorder into operation immediately, specifically:

In the packaging of the cameraInstead, there is nothing beyond the usual wall anchors and screws. It would take a little more, but I'll explain it later.

Design and materials: the camera

La Annke's camera that comes in this kit is an FC800, a model that will probably never be purchased individually but only in bundle with the DVR, which is something that, regardless of the brand you buy, I recommend you always do to take advantage of everything in the smallest detail.

That said, the FC800 it is an inexpensive camera, and you can feel it as soon as you take it in your hand: it is made entirely of plastic, it is very light and can be easily installed on the wall using the special support and three screws (which you will find in the package).

On the upper part there is the classic dome to protect the lens, albeit the FC800 is IP67 certified and weatherproof. On the lower part, however, there is a Flash LED which is activated when motion is detected or when light conditions are extremely poor and require it.

Small sore point about this Flash is the lack of reactivity, both to turn on and to turn off when it is no longer needed.

A constructive aspect that I did not like is the adjustment of the camera orientation: we are used to being faced with small knobs or small manual rings to adjust, easily, quickly but above all without accessories, the view of the camera. Here the story is different, why Annke FC800 requires a screwdriver to perform the regolazione: nothing complex, but I found it cumbersome.

Annke's FC800, as anticipated, is one analog camera: unlike PoE cameras that connect to the NVR with a single connector RJ45 capable of supplying power, analog cameras need a BNC connector as well as a 12V power supply.

These cables are NOT supplied in the package, but they are all accessories that can be purchased separately: this is not a problem, to be honest, because it would be impossible to create standard formats for these cables since every mounting situation is different and hundreds and hundreds of hundreds of meters of cable.

The DVR: what it is and when to use it

There are different types and models, but above all with different technologies; the DVR, perhaps, has now been superseded by NVRs (which support fully digital broadcasts, while the DVR is digital, but the cameras are analog), but in any case it remains the most widespread and popular solution also due to the decidedly lower price than theNVR (and all that that entails).

The video signal comes to the DVR through video coaxial cables and a predefined number of cameras can be connected, from a minimum of 4 up to 64 in the most professional solutions (this one of Annke under test supports up to 8 cameras, but DVRs are also available on the site with 32 video inputs).

After that the signal is transformed inside this DVR, and all recordings are saved on a physical SATA HDD installed inside; the recording on the contrary of many Smart IP cameras is continuous and not only on detection, which can be useful in case you want to monitor H24 some area.

Why prefer a DVR to an NVR and vice versa? Okay, sensible question. Solutions consisting of DVRs and analog cameras have been the only way forward in the video surveillance field for years, but to date they have been overtaken by NVRs and (digital) IP cameras for obvious reasons.

The PROs of an analog solution, with DVR, are undoubtedly the lower costs and the very high possibility of choosing the hardware to be purchased. With NVRs, on the other hand, the Pros are many more starting from the very immediate system scalability, up to the video quality that can be much higher and provide images with a resolution equal to more than double that of an analog system.

In a nutshell in an unpretentious home environment, a solution with the DVR (like this one I'm telling you about) is extremely more than enough.

Functionality of the DVR

The DVR that Annke offers in this Kit is quite modern and avant-garde, despite the price being less than 100 euros (if purchased individually); it is equipped with 8 video channels, one port USB 3.0 for faster saving of files on external devices, a port HDMI and a VGA, an audio input and output, and a port RJ45 for connecting the DVR to the internet.

Il configuration procession is really very simple, even for those who have never configured one: after having powered it, connected the video source, the internet and all the cameras we have, just turn it on using the special selector on the back.

The configuration is entirely guided: we will be asked to create an administrator user for all the procedures, after which the cameras will all be ready for use without any additional configuration, and this is possible thanks to the fact that both products are from Annke. Otherwise a little more experience would have been needed: between protocols, resolutions and image transmission speed it is easy to get stuck in a maze from which it is difficult to get out.

Once configured, you will lose yourself among the dozens and dozens of features that Annke's DVR makes available to you; technically you just need to know that it supports images up to 4K and compresses videos with the H.265 + codec, which means lighter files with a recording quality and speed approximately 5 times higher than the H.264 standard.

Support connection to alarm systems via audio output; these alarms can be activated thanks to the motion detection system that works quite well even in critical light conditions and, in addition, you can individually configure any zones to be excluded for each camera.

It is also possible to program the recordings day by day, week by week, camera by camera: in short, everything that can be useful in the software this DVR from Annke there is, like the more expensive models. The recordings are then made on the3.5TB 1 ″ Sata HDD which is included in the Bundle (but you can also choose larger models, depending on how many cameras you intend to install and how long you want to keep the recordings) and it is possible, if necessary, to export them to a USB stick directly in MP4 format or compressed in ZIP should they be numerous.

The video quality of the FC800 is mediocre, it is not very defined but still more than good for home / home use. The 5MP sensor has a focal aperture of F / 1.0 which, coupled with the LED flash, is able to guarantee good quality even in the case of total absence of light.

The flash, from the technical data sheet, can cover a wide area up to 30 meters, but in practice 15 meters is a more concrete value. Furthermore, a feature not to be underestimated is the ability to shoot in color both day and night: this aspect did not excite me very much, especially after trying the Annke NC400 which, on the contrary, completely amazed me.

Composition of the Video Surveillance Kit and considerations

The video surveillance kit that I tried Annke proposes it on the official website in two configurations of 4 and 8 cameras respectively, always with the same DVR but with a different HDD, 1 or 2TB. The prices for the two configurations are respectively €295,99 e €437,99 that, if we remove only the cost of the DVR and HDD, they give us a unit cost of less than € 50 per single camera, which is an exceptional price.

Il quality-price ratioor is, logically, exceptional and unattainable by other products of similar quality; the target is undoubtedly the non-professional domestic one, to which I would recommend a completely digital solution with PoE cameras.

1 of 20
⭐️ Follow and support GizChina su Google News : click on the star to insert us in the favoritesi . 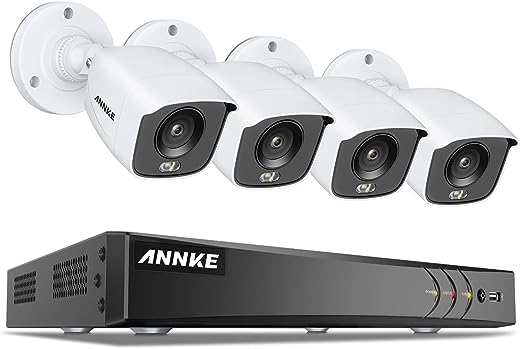