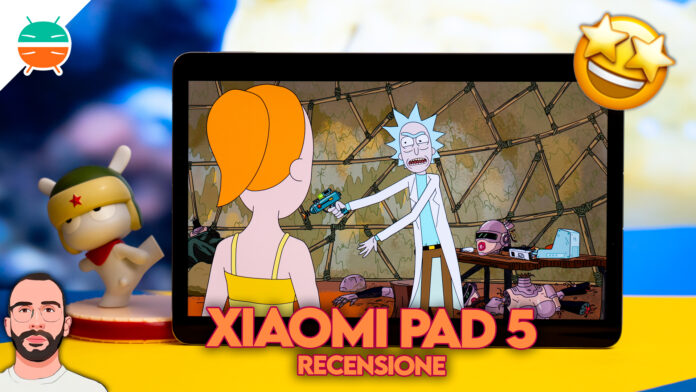 It was when 2014 Xiaomi presented his tablet, the first "Mi Pad", The enthusiasts and fans of the brand were delirious: actually the product deserved, like many other products of the brand, but the road to" mass "diffusion was not yet as developed as it is today, so it remained a product that was not properly" cleared. ", in all senses.

Years later Xiaomi returns with a high-end product, and does so in different variants: Xiaomi's Pad 5 is the first device in the house to lose the abbreviation "Mi" in the name, but the heart remains the same.

La Xiaomi Pad 5 packaging in the Global version it is equipped with the classic accessories. Inside, in fact, you can find:

When you think of a tablets, inevitably one thinks of Apple iPad, be honest and don't hide behind a finger, because you know better than me that it is. However, he has a little tired talking about tablets only in the presence of an iPad, because even the Android world is full of alternatives.

Lo Xiaomi pad 5, for example, it is a product accessible to all but above all suitable for any kind of use. But I want to start with the design: I love this Pad 5, and I will not deny it. I love the squared lines, they make me think of a fresher design and in step with the times: it might seem a superficial examination, but there is no objectively beautiful or objectively ugly design, it's a fact.

With delle dimensions equal to 254.7 x 166.3 x 6.9 mm and a weight of approx 511 grams, the Xiaomi Pad 5 comes with an aluminum side frame with metallic finishes and a rear glass back cover with a matte finish that helps make this Pad 5 truly one of the nicer devices I've tried lately. To let you understand better what kind of finishes we are talking about, just think of the same type of back cover that we find on the iPhone 12 Pro, identical. I made it, right?

Xiaomi certainly did not stand by and did not intend to return to the market with a product, pass me the term, "incomplete": Pad 5, among the compatible accessories, is also equipped with Smart magnetic keyboard beyond that of Pencil, which contribute to making the user experience more complete and open up to different usage scenarios. The comparison with only the iPad Pro, by now, no longer makes sense because the producers of Android devices have now moved in this direction, just think of Huawei with the devices of the series matepad.

At the endowment level, then, the Pad 5 from Xiaomi it has on the lower part the three magnetic pins for connecting the keyboard, while on the upper part the volume rocker. On the two sides, however, there are four speakers, two microphones, the Type-C input for charging and the power button. A 3.5mm headphone connector is missing, but I don't see it as a serious shortcoming as we are increasingly heading towards a wireless generation.

On the back, however, there is a space 13MP f / 2.0 camera together with an LED flash; think that on the PRO version of the Pad 5 the camera reaches up to 50MP in the most expensive version of the product.

The SIM slot is absent, which remains a feature available only in the 5G variant of the PRO model.

For the record, the Pad 5 it is also available with 256GB storage, but Xiaomi will probably not import this memory cut even in Italy.

Using a Xiaomi product is, for me, always a pleasure: I have been using the devices of this brand since the time of the first Mi1 that arrived in Italy with practically a system in Chinese and then you had to spend the nights modding there before being able to use it. Today everything is different, this Pad 5 just pulled out of the box, despite my sample coming from China (in the Global version, however), you only have to enter the data of the Google account to find yourself in front of a ready-to-use product, in able to offer performances at the highest level.

La compatibility with classic keyboard and mouse connected via Bluetooth, as well as the presence of the PC mode, will allow you to use the Pad 5 as a real laptop and I assure you that it is really very comfortable. For the rest, there is not much to specify: here the user experience is at the highest levels, there are no blocks, micro lag and slowdowns and any type of use you should make of them, I am sure that a product like this can satisfy you.

Joypad gaming, personally tested with a Xbox One Pad, it's cool: certainly not a console, but using it while you are traveling by train or in the garden for a relaxing match, I assure you, makes the difference.

I four side speakers, equipped with Dolby Atmos sound optimization, have marked highs and lows and an overall well-balanced equalization. The maximum volume is often too high and, at times, I have had to lower it in order not to overdo it. It must be said, however, that even at maximum volume I did not notice distortions or quality losses.

Leaving aside the technical things, which however speak for themselves, I felt a sense of extreme pleasure with this display: I spent a few hours to ascertain its goodness, playing random videos in 4K HDR on Youtube, and I probably couldn't even make you understand what we're talking about.

The colors are excellent, the viewing angles are really good and the maximum brightness is something surprising, sometimes annoying enough to force you to lower it; support for HDR and al Dolby Vision is the icing on the cake, and you should have Netlifx in 4K HDR to really enjoy the full potential of this display.

The only flaw, just to be picky, is the anti-reflective treatment that did not convince me at all, but it is a compromise to which we must go down.

La camera used by Xiaomi on this Pad 5 is a unit of 13MP f / 2.0, which at first did not impress me but then, looking at the shots on the computer, I had to change my mind. The photographic rendering, in fact, compared to the camera app screen while you are shooting, is totally different and if on the one hand you will see a photo poco defined and with a lot of noise, looking at the final shot, even from the Gallery, you will notice a much higher quality.

Logically it remains one camera from "tablet" whose use is limited for emergencies in which you may have an unloaded smartphone, or to photograph documents for which there is, in fact, a special mode in the camera app. It can also record videos in 4K at 30fps, or at 1080p and 720p, always maximum at 30fps.

The front camera is 8MP f / 2.0, also records video up to a maximum resolution of 1080p at 30fps: the quality is sufficient in well-lit environments and excellent for traditional video conferences or video calls.

There is not much to discuss about the software: we are facing the Miui Global in version 12.5.2 Based on Android 11 with security patches updated to July 2021, all in all recent for a product whose distribution has just begun.

The optimization, as usual, is good, as well as the integration with Google services which, by now, is no longer a problem for Xiaomi. This Pad 5 runs perfectly and you can totally rely on him even for a day's work without a computer or anything else.

In this regard, the PC Launcher, which I personally installed via APK (downloadable from HERE) and that transforms the tablet in all respects into a laptop, which can be connected to the external screen via Mirroring; graphics and gestures are somewhat reminiscent of Windows 10, the app windows are resizable and, as already mentioned, you can connect a traditional bluetooth mouse and keyboard (if you don't want to buy the original Xiaomi one).

The battery supplied with Xiaomi Pad 5 is from 8720 mAh and is compatible with the fast charging up to 33W (even if in the package there is a power supply that supports up to a maximum of 22.5W). The autonomy is variable according to the types of use that are made.

I tested with Netflix a battery consumption of about 15% every hour with maximum brightness and 50% volume from the speakers; different is the “office” use with e-mails, document processing and online browsing where hourly consumption is around 10% every hour.

Finally a bit of freshness in the Android world, with an interesting product from all fronts, starting from the aesthetic one up to the performance one. The real turning point, imagine very well, is the Pro 5G model of which we do not yet know news regarding the official import on Italian channels, but without a doubt it will be available from China, as well as this model.

Logically in this case we are talking about a price BOMB of only 299 euros for the 6 / 128GB version like the one I tried in my review: does it make sense? Of course yes! The Pro 5G version is undoubtedly more pimped and full of additional goodies, but the value for money of this model is unbeatable.

1. Get it when you buy: In Goboo, you can get the tablet case for free when you buy Mi Pad 5, only during the upfront price period.
2. Gift package: take part in the booking and you will have the opportunity to obtain a gift package of accessories for tablets worth 49 euros
3. Win a free order- After placing an order during the event, post the image in the comments area and you can enter the raffle to win the tablet for FREE!
4. Winners: publish on your social media how to participate in the Goboo Mi Pad 5 Giveaway, you will have the chance to get a Mi Pad 5 for free.
5. High quality service: By participating in the booking on Goboo, consumers can also take advantage of exclusive and exclusive services such as receiving the first batch of goods, fast delivery, return within 14 days without reason and free shipping.