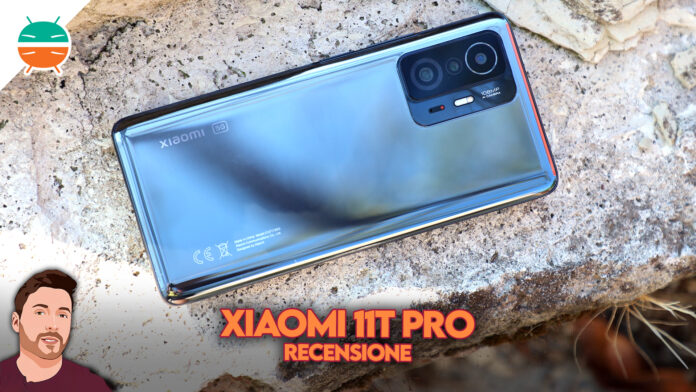 We have waited for it, we have practically already seen it in dozens and dozens of rumors, and at the end that time of year has arrived: Xiaomi has officially presented the new 11T family, whose top of the range is, of course, the new Xiaomi 11t pro. To find out all the differences and prices of the three models, you can go and read our in-depth analysis.

Well, I've been using it for a few days as my main device and I'm ready to tell you all its pros, cons and what you need to know.

Given the certainly not compact size of the smartphone, even the packaging of the Xiaomi 11t pro it is quite important in terms of footprint. Inside we find:

Let's get straight to the point: the first sensation you get when you extract it Xiaomi 11t pro out of the box, is to have in your hands a device made with extreme care, both as regards the production process and as regards the materials. The frame is metallic and transmits a strong solidity, while both the front and the back are protected by two Gorilla Glass Victus panels which, it must be admitted, is not only more resistant to scratches and bumps, but manages fingerprints significantly better: the back cover of the color we received in the test (Meteorite Gray, which will also be joined by Celestial Blue and Moonlight White) does not suffer from fingerprints at all, which is undoubtedly a plus for the Xiaomi 11t pro.

In short, we are therefore in the presence of a solid and well-finished smartphone, but at the same time very impressive in terms of dimensions: its 164.1 x 76.9 x 8.8 mm certainly does not make it a comfortable product to use with one hand, but on the other hand this is the price to pay when buying a device with a 6.67 ”screen.

And if in terms of panel dimensions there are not many new features compared to last year's Mi 10T Pro, those of Xiaomi have managed to take a good step forward with regard to the weight of the smartphone: with its 203 grams of weight, it Xiaomi 11t pro loses 15 grams compared to 218 of the previous generation. Of course, it is not among the lightest on the market, but the lighter weight is immediately felt.

The fingerprint sensor has been positioned laterally, in the power button, while the audio sector has been entrusted to Harman / Kardon: the stereo speakers are symmetrical, are completely independent from the ear capsule and guarantee an excellent balance of frequencies. In short, in terms of audio it Xiaomi 11t pro it is among the best smartphones around.

Then there is a new rear bump camera which, compared to the one seen on the Xiaomi Mi 11, loses those rounded lines in favor of a much more squared shape and definitely more in line with what is seen today in the Android landscape.

So what is missing from this Xiaomi 11t pro (in addition to the wording "Mi" in the name)? To be honest, very little stuff. There is no 3.5mm headphone input, does not have expandable memory and, unfortunately, still does not have any IP certification.

In reality, Xiaomi has been using a waterproof nanoparticle coating for some time that still protects smartphones from splashes, small amounts of water and rain: in a nutshell, swimming in the sea or in the pool are to be avoided, but for everything else you can stay more than rest assured.

The screen of the Xiaomi 11t pro integrates a 6.67 ”FullHD + AMOLED panel capable of handling a refresh rate of 120 Hz and a touch sampling rate of ben 480 Hz. And even if in principle it is a panel very similar to what we have seen in the Mi 11, in reality there is some difference: it is clearly less resolute, it is of the flat type, but the fundamental difference is the 1000 nits of peak brightness.

But as happened with the Mi 11, if I had to describe my experience in recent days with the screen of the Mi 11 with a single word, I would say: exceptional.

Also in this case we are talking about an A + certified screen from Display Mate, compatible with Dolby Vision Atmos and HDR 10+, with a depth of 10 bits (true), which is at the top in terms of precision and clarity of color and visibility too. in direct light conditions.

Il color balance is perfect, there are a whole series of features that use artificial intelligence to optimize video playback, including the fluidity and precision of HDR, the blacks are deep and the contrast is perfect.

What doesn't really make me crazy are the frames, definitely evident and typically asymmetrical: the one at the bottom is slightly larger than the one at the top but, as usual, it is probably a detail that only a patient like me would notice.

Under the body of the Xiaomi 11t pro we find the usual Snapdragon 888 flanked by 8 GB of RAM of the LPDDR5 type and 128 GB or 256 GB of non-expandable internal memory of the UFS 3.1 type. In short, except for the amount of RAM available, it is a configuration very similar to that of the Xiaomi Mi 11, which however gave us results in the benchmarks a little subdued when compared to the (real) top of the range of the company .

Let's be clear, these are more numerical than tangible differences, but which are worth emphasizing because they confirm, once again, that the real top of the range of the company for 2021 continues to be the Xiaomi Mi 11.

Anyway, it is clear that the Snap 888's performance and the whole configuration in general, allow the Xiaomi 11t pro to perform practically all the most complex tasks and 3D games at maximum performance: the usual Call of Duty Mobile runs which is a beauty, with a very stable and fluid collapse at maximum graphics settings.

The temperature management is also good, even if at the time of the first configuration of the smartphone the device not only heated up a lot, but a high temperature warning appeared on the display: ok, it is a problem that has not happened to me anymore, but that however, it should be emphasized.

Apart from the new camera bump, the camera compartment of the Xiaomi 11t pro it is the one that has probably changed the least compared to the Mi 11. The main camera is still the same 108 megapixel f / 1.85 optically stabilized, and is flanked by an ultra wide angle from 8 megapixel f / 2.2 and a macro lens from 5 megapixel f / 2.4.

Photos with good brightness
1 of 18

And apart from the difference in the wide-angle aperture, seen on the smartphone display the main camera of the Xiaomi 11t pro captures the same good shots of the camera present in the Mi 11, the saved files are photos from 27 megapixel, born from a 4 in 1 pixel binning starting from a 108 megapixel source, and in a nutshell in good lighting conditions, the photos taken with both the main camera and the wide-angle camera of the Xiaomi 11t pro they are good, have excellent dynamic range and excellent noise management. However, it may happen that, despite active HDR, in certain shooting conditions you may have to manually manage some overexposed areas, which are not corrected by software or artificial intelligence.

However, things change with the wide angle when shooting at night. Of course, it is now possible to shoot with the night mode even with the ultra-wide-angle camera, but the less bright aperture of the optics used tends to make the sensor go into distinct difficulty, forcing it to produce shots that are less pleasant to look at in detail, with a slight noise always present and with areas in which , when cropping, it is also possible to notice a slight pastel color.

As for the macro camera, of which I keep asking myself the usefulness, the good news is that it allows you to shoot macros at a slightly greater distance Compared to the competition, the bad news though is that it is (clearly) not stabilized, which could make shooting with the perfect shot quite difficult.

No optical zoom, and you will have to be satisfied with a digital zoom that can go from 2x to 30x, with an average quality that certainly does not scream a miracle: with a 2x magnification the images continue to be enjoyable, but going beyond the image quality deteriorates exponentially. I keep asking myself why Xiaomi has not thought about eliminating the macro, in favor of an optical zoom that is not too pushed. Mystery.

Good videos, which can be recorded in 8K is 30fps, or in 4K at 60 FPS, or take advantage of one of the many new modes, which we have already talked about in an in-depth analysis on our YouTube channel.

Nothing to say about the software. The Xiaomi 11t pro is the typical Xiaomi with Android 11 and customized by MIUI 12.5.4 which by now we have come to know very well. Okay, it's not one of my favorite graphical interfaces and it offers everything except a stock Android experience, but it's a complete GUI that integrates a number of truly remarkable features.

It is also available but "video tools" section with which you can activate some advanced features for the reproduction of multimedia contents, and everything flows which is a beauty, without any slowdown and with always fluid animations especially by setting the display to 120 Hz.

And just with regard to the refresh rate, a small note: once the device is configured, the system will work at 60Hz and you will have to manually activate the 120 Hz in the Display settings.

Finally, speaking of drums, in the Xiaomi 11t pro an excellent double cell 5000 mAh pack has been integrated, which will allow you to use the device all day without any problem even in case of intense use. Using your smartphone less frequently, you might even think you could cover two days with a single recharge.

in Xiaomi 11t pro support for the excellent 120W fast charging system is then integrated, which allows you to recharge your smartphone from 0 to 100% in about 20 minutes.

And in short, it is useless to go around it too much. Bundle or non-bundle, the price of the Xiaomi 11t pro it's too high. It is for what it offers (or does not offer) and it is because now in this price range there are many alternatives and some of the top of the range of a few months ago can now be purchased at less prohibitive figures.

The way I see it, the right price for it Xiaomi 11t pro it should be around 550 euros. The same amount that, coincidentally, it will be necessary to shell out if you buy it on Amazon using the voucher that the company itself makes available.