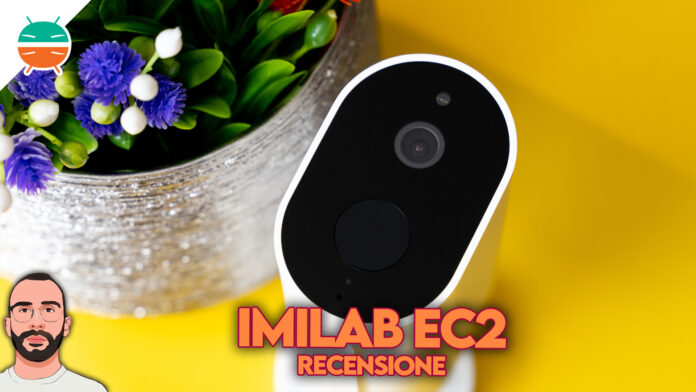 If until a few years ago the video surveillance sector was a taboo for many and dedicated only to a very few connoisseurs, today thanks to the advent of small-sized cameras that use different communication protocols, the topic has become accessible and within reach. of all.

Today we talk about IMILAB EC2, a product no longer brand new but which, despite being on the market for a while, still manages to offer performance in step with the times.

La sales package it may be different depending on the bundle you buy, but basically the accessories are the same. Specifically, we find:

Aesthetically well done, the Imilab EC2 is made of plastic with white matt finishes all over the body; the dimensions are equal to 47 73 x x 140.4mm and the weight is alone 270 grams. The design is simple and minimal, the finishes are pleasant and give the camera a higher importance than many other similar products on the market, often plagued by creaks or bad assemblies.

On the back there are in addition to the speaker and from QR Code for the first configuration of the camera there is also the threaded hole useful for connecting the accessories for wall mounting.

Il power button it is present along the bottom, covered by a rubber protection to prevent water from entering the nearby MicroUSB connector for charging.

On the front, however, there is the lens, flanked by the PIR sensor for night vision as well as by the microphone and by a small status LED that changes color depending on the state of charge of the battery or if the connection with the gateway is missing.

La sound mode supported is logically bidirectional, in the sense that you can interact with those on the other side of the camera simply through the Xiaomi Home application.

The video camera Imilab EC2 it is also certified for outdoor operation and the guaranteed operating temperatures are equal to -20 + 50 degrees; and then IP66 certified against water and dust.

Il wall fixing it is very simple thanks to the accessories in the package; you can choose whether to fix the camera with two screws (and relative plugs, all supplied in the package) or to use the 3M adhesive support if you do not intend to pierce any wall. The advice is to use the double-sided adhesive support only, for example, on a glass or on a smooth surface, as with the weight of the camera on a wall it would not hold more than a few hours.

The photo sensor here is a 2MP with f / 2.6 focal aperture and a viewing angle equal to 120 ° which allows you to record video in resolution FullHD 1080p: technically they are values ​​identical to most of the IP cameras in circulation.

The picture quality is good, but I probably would have expected a little more: viewing via the app allows us to adjust the video quality on three levels, each of which will have a higher data transmission as the quality increases.

La night vision it is activated automatically when the natural light becomes poorer: I found it interesting how the classic red lights produced by infrared are not seen with the naked eye, thus making the camera practically camouflage if it is hidden in the house away from prying eyes.

On this model of IMILAB video camera has also integrated a recognition system through PIR + AI: in addition to infrared sensors capable of detecting the body temperature of the "intruder", through artificial intelligence it is possible to practically distinguish 9/10 humans from animals, thus avoiding false alarms in case you have pets at home. In practice, however, it must be said that there could be false alarms (in my case the alarm was activated with the curtains moving by a strong wind) and that accuracy is not absolute.

Thanks to the gateway, whose dimensions are practically pocket-sized, it is possible to connect several cameras in series and monitor them all through the application; the Gatewayit also allows you to make video recordings "on detection" on one MicroSD physical up to 64GB.

The alternative is thecloud storage completely free that IMILAB offers to users: in essence it allows us to have free storage for 7 days of recordings, logically it is always recordings on the move and not continuously 24/7.

Hidden and appropriately disguised the GatewayHowever, I find the solution of saving on MicroSD more sensible than the one on the Cloud, which I found a bit slow to consult and at times unstable.

The quality of the audio that the camera captures is decent, it suffers a bit of distortion probably due to excessive amplification, such as to be able to capture as many sounds as possible.

La battery is a 5100mAh unit and ensures a duration of about 3 months, according to what the manufacturer declares: the variables are many, from the workplace to the quantity of surveys that it reports and records, but in principle the autonomy should be around 100 days.

Il configuration process it is a little longer than usual, given the presence of the gateway (without which the camera will not work), but still very simple and within everyone's reach.

The reference application is, as already mentioned, Xiaomi Home through which the games are managed; the first step is to scan the QR Code under the gateway, after connecting it to the power supply and to the internet (via LAN cable, alternatively via Wi-Fi the wizard on the app will start), then the rest comes by himself.

The next step is to simply press and hold the camera's power button Imilab EC2 until the flashing blue LED is activated: in that case the camera is ready for pairing and will be associated with the gateway we have just installed. I had a bit of difficulty in this situation, and when I googled I noticed that it was a widespread and common problem: if the LED does not flash blue, press and hold the power button for about 10 seconds to reset the camera. .

Once the camera is associated with the Gateway we can name it according to the environment in which we have installed it; through the same procedure it is possible add multiple cameras to the same Hub.

The application you need IMILAB EC2 for operation is that of Xiaomi Home; by now we know it very well, in all respects and, if in some cases it is practically loved (as happens, for example, with Dreame vacuum cleaners), in this precise scenario it did not satisfy me 100%.

Do not misunderstand me: it works fine, but there is something that is not up to par with the whole app. The connection times to the camera are long, it often fails and prevents us from starting the live stream of the camera; the translations are not perfect, indeed many sections have remained completely in English, others in poor Italian, still others perfectly translated.

Plus there's a little bit of latency between triggering detection and triggering logging: with a furtive movement the detection could be circumvented and in the recording, which starts with 3-4 seconds delay, a possible attacker could go unnoticed.

For the rest, the functions are the traditional ones: there is the programming of the surveillance period (with the relative sending of detection notifications), but not the exclusion of one area rather than another, as happens on many other competitors (even more cheap, you see IMOU Ranger 2C).

IMILAB EC2 is a particular product, not one of those recommended to anyone: its price, higher than many products available online, but certainly not the most expensive in an absolute sense, would push me to recommend it only in case of specific types of use.

Let's face it: the image quality is good, for users who are not too demanding or, perhaps, for use at home it is definitely more than good. The situation changes if you entrust your home security to a product of this type: registration upon detection, unfortunately, suffers from such a delay that, in some cases, you lose the shot of the "intruder" subject. Among the points in favor there is undoubtedly the possibility of totally wireless operation: here, a domestic use is its perfect habitat.