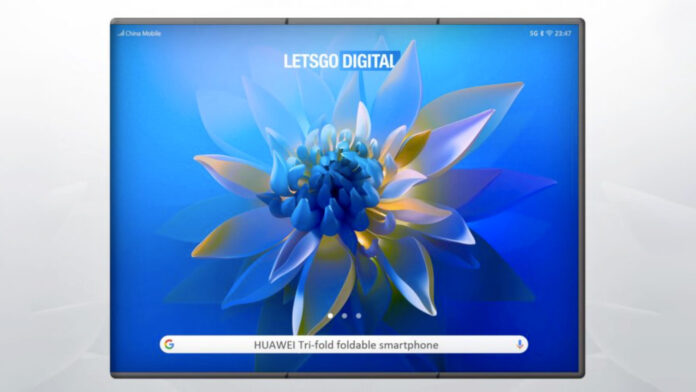 Among the most popular brands in the smartphone sector foldable, Huawei continues its research and development march. The latest found is the patent of one 3-fold foldable Huawei smartphone (o Tri-Fold), which could represent the future of the category.

Huawei: here's what the patent Tri-Fold folding can do

If we look at it at first glance, it does not differ much from current folding, but its nature allows it, thanks to the two hinges, to have more folding possibilities. Its peculiarity is also in the front screen, since it is flanked by the bumper chamber, so it does not require a possible selfie camera. Among other things, the compartment is equipped with 4 sensors, one of which is a periscope.

But returning to the characteristics of the various panels, such an extension can lead to the display of multimedia contents of greater scope, more extensive graphics for company presentations and many other situations for which leaflets are useful but bigger.

However, there is no shortage of disadvantages, because this foldable smartphone would result in reality heavier and thicker. Also because, it is as if there were three devices on top of each other. Putting it in your pocket quickly wouldn't be ideal.

Also, the narrow front screen has a different screen ratio than usual, so it's very likely that the icons are also placed closer together or worse, reduced. In practice, you could probably use this display primarily for take selfies and make video calls, to then carry out other operations with the internal panels.

Obviously, as often happens, these devices remain patents that will then lead to the actual technology, but the verve with which Huawei instead in increasingly particular patents is certainly curious.

Google Pixel 6 Pro will have a much better screen than Pixel ...