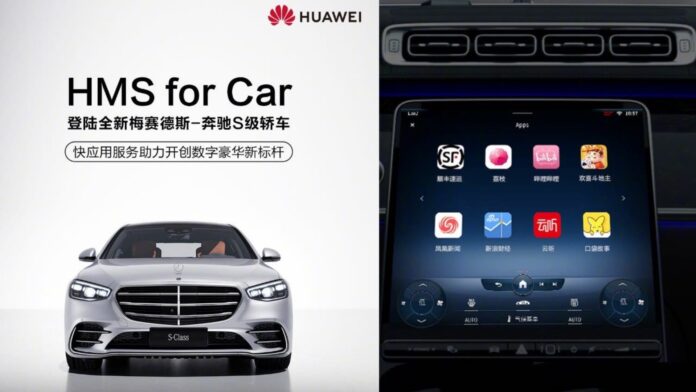 How many times in recent months have we talked about Huawei in the automotive sector? And how many times the same Huawei reiterated that no, it will not produce a 'auto but which he then produced components e tech for other brands, starting to become a kind of reference point. Below, we show you all the technologies designed for the car presented so far.

Upgrade 08 / 09: Huawei unveiled the AR guide that makes the windshield a smart display. Find everything at the bottom of the article.

Huawei Auto: all the technology and components presented

The key technology of Huawei's entire automotive system is undoubtedly HiCar. Born as a smart system for total control for intelligent cars, it made it possible to manage all the components of the car right from the start. With the arrival of HarmonyOS moreover, it has become more and more complete, even becoming a system of infotainment very advanced, achieving the remarkable result of being on the cars of major Chinese and world manufacturers, such as BYD, ArcFox and even Volvo. All this then led to the arrival of the Dedicated Smart Screen.

From concrete objectives to patents, always very interesting, where Huawei has developed a system of autonomous driving, feeding it with driving parameter settings and the calculation of the dynamics of the route being carried out, increasing its safety. It is not currently on the market yet, but it could represent the future.

Perhaps the most interesting and important dedicated product in the entire Huawei automotive ecosystem. To get to the system of LIDAR sensors definitive, the brand has employed many engineers and professionals in the economic area of Wuhan, the most profitable for cars in all of China. Structured with a 100 line laser, Huawei's LIDAR sensor offers very precise detection of what surrounds the vehicle, improves the communication system, avoids obstacles and above all it handles better the impact of close braking. The first car to use this system is the Arcfox αS HBT.

A patent, but very interesting, closes the roundup of technology and components for Huawei's automobiles. In fact, the brand is developing a kind of assistant robot which will help the driver to guide with a number of very useful functions. For example, it features camera which can rotate interacting with the driver. According to the patent, it will not be an accessory, but something integrated into the car at the time of production. It is not yet known when and how it will arrive on the market.

Great attention is paid by Huawei for autonomous driving of its smart car system. And after having seen in action the first car with such a system on autopilot, we get a new one patent dedicated to this technology.

In fact, it seems that the brand wants to develop Air Gesture dedicated to autonomous driving. But how do they work? According to the patent, making a gesture in front of the camera, it elaborates the user's will to perform a particular maneuver or in any case to carry out an activity in the car.

This could be very useful to solve the "problems" of space for those who want to use the touch screen but it is sitting on a back seat. With such technology, this process would really be made easier.

Huawei continues its efforts for the aforementioned autonomous driving, this time showing a new one millimeter wave radar which allows a 4D imaging ad high resolution. This system has a high speed measurement capability, excellent resistance to weather and light conditions, as well as a detection of normally less visible obstacles.

To summarize how much better the driving experience is, Huawei summed it all up in three points:

The gem is the detection of cars that are even ahead of some cars in front of ours, by detecting the profile of the vehicle's chassis. This allows a preventive deceleration, thus anticipating the movement of the car that precedes us and precedes it, reducing the risks of a rear-end collision.

A lot of Huawei car technology needs a heart that isn't just the engine that drives the car. And for this reason, the brand has developed and included the new in its automotive solutions chipset top range Kirin 990A, which does not look bad at all compared to the brothers of the same family.

But how is this SoC composed? According to sources, it is an Octa-Core equipped with 4 Core TaiShan V120 (smaller) and 4 Cores ARM Cortex-A55 therefore quite powerful. For the GPU, the Mali-G76. In short, no expense has been spared for a technology that could lead Huawei to excel without having to think about the smartphone sector.

The new patent published by Huawei reports this time a system of emergency call dedicated to vehicles. But how does it work? Quite simply, if the car's assistance system fails, the emergency communication via smartphone, so as not to miss the opportunity to be assisted.

Having already entered many smart cars of various brands, Huawei takes intelligent driving to another dimension. In fact, he presented his new one AR HUD technology which allows you to make the windshield a interactive smart display. Already used in aeronautics, it will allow the driver to have a complete picture of their car simply by looking at the front glass.

Huawei AR HUD offers a wide viewing angle of 13 ° x 5 °, which is a large viewing area of 70 inches which can cover up to 7.5 meters in the front. To keep the driver's view clear and distraction-free, the company built the driver's system in the lower area behind the steering wheel. In short, the future of cars is now increasingly pushed towards an important technological revolution, but when will it become for everyone?