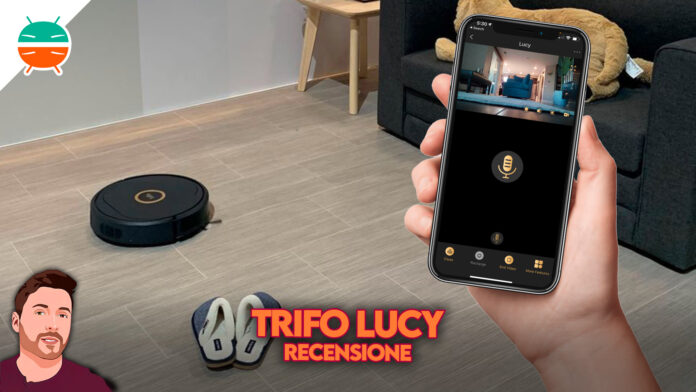 When trifo presented the new one Lucy during CES 2020, its 1080p camera with HDR (and night vision) and the integration of artificial intelligence for the recognition of objects, people and pets, sparked my curiosity about how this sort of hybrid between robot vacuum cleaner and floor scrubber and surveillance camera could bring something truly useful and innovative. Because, let's face it, generally these "hybrid" products tend to promise a lot and then fail to stand out in any of the features they integrate.

The reality of the facts, however, is that these "experiments" are always nice to test, at least because they introduce something new making things much less boring. Well, Trifo Lucy is now also on sale in Italy (on Amazon) and has all (or almost) all the credentials to be able to keep its promises: it should even be able to recognize a sock, avoiding it, or any pet excrement.

The contents of the packaging of the Trifo Lucy it is typical of the category. In addition to the robot vacuum cleaner and floor cleaner, inside it is contained the charging base, the dirt container, the water container (of which there are a lot of things to say), manuals and a series of microfibre cloths. soft with which the device should be able to polish floors.

The design of the Trifo Lucy it is very similar to that of other robotic vacuum cleaners and floor cleaners. The shape is perfectly circular but the dimensions are not so compact: above all the thickness, which is not among the lowest in the category, could probably make it more difficult to pass through narrow areas, despite the lack of the typical laser turret that we have come to know in these particular devices.

All management of the floor plan, obstacle detection and object recognition takes place via the front camera of the product, which not only integrates a 1080p sensor with HDR, but which is flanked by an infrared blaster with which the robot can "see" even at night: it is a feature designed above all to support home surveillance modes, but which also solves the problem of operation in places poco illuminated, typical of robots that use a camera for positioning.

On the back there are two large air intakes which, as in any robot vacuum cleaner, could tend to move the dirt further and carry it around: but despite this detail, which we are now used to with this type of device, at the end of the cycle cleaning the Trifo Lucy he managed to suck up every particle of dirt without any problem.

What they could have worked on better, in terms of materials, is the golden crown positioned above which integrates two physical keys positioned near the real ones, reachable by opening the upper compartment: the quality is rather low and, perhaps also due to the coloring. , the feeling you get is not one of the most beautiful.

Always opening the upper compartment you access the dirt container, which has an excellent capacity of 600 ml, as well as the various management buttons of the vacuum cleaner. What left me decidedly perplexed is the water container which is almost infinitesimal in size, is mounted using a Velcro system and has no solenoid valve to manage the amount of water to be distributed on the floor. Even the mop is very small, let's be clear it does its job well, but adding the scarce amount of water available to its “free fall” distribution, it will run out of liquid in no time. In a nutshell, the Trifo Lucy polishes floors only thanks to the mop soaked in water, and does not distribute it gradually.

The charging base is rather standard, which is very light and does not integrate an automatic dirt emptying system, but which is recognized by the robot during cleaning and skilfully avoided, so as not to move it and not to lose the starting point of the process.

Power of suction and cleaning IA

Putting aside the quality of the cleaning of the floors, which I have practically already told you about, it must be admitted that in terms of cleaning quality the Trifo Lucy he doesn't have much to be criticized for. The robot is powered by a 3000 pa brushless motor, and this suction power is clearly seen when you notice the simplicity with which it sucks up dirt and animal hair. Of course, it is not among the most powerful in the category, but it is able to aspire in a very decisive and functional way. However, it does so with a rather important noise: at maximum suction power the noise is full-bodied but, fortunately, through the application it is possible to manage the power with a sliding selector and not through the (typically 3) preset settings.

All robot management takes place through a proprietary application available for both iOS and Android, in which a rather precise map is generated despite the absence of the LiDAR system. All this is possible thanks to the excellent camera integrated into the robot, thanks to which those of Trifo have managed to implement a whole series of advanced functions, the vast majority of which use artificial intelligence.

In addition to the possibility of creating the floor plan and setting up virtual walls or forbidden areas, the Trifo Lucy allows the user to watch the streaming coming from the camera in real time, even in cleaning mode, but the most interesting feature is the recognition of objects: again thanks to AI, Trifo Lucy for example, he will be able to recognize and avoid the cables he encounters along his path, he is able to distinguish pets and stop himself at a safe distance, and he is also able to understand any excrement deriving from our four-legged friends.

In short, it is pleasant to be able to clean the floor with a robot that does not pass over things that should be avoided, does not tangle in the wires and is not afraid of the presence of socks on the floor. All this, with the possibility of controlling the video streaming to understand where it is cleaning, or using it just like a sentry: when you are not at home, you can make the robot walk around the house and use it as a security camera to check this. which happens even taking advantage of an intruder alarm.

The battery of Trifo Lucy it's the same 5200mAh we've seen in other recent models. It is a respectable battery pack, which however has to manage a slightly more energetic system. In my tests I was able to run it continuously for about 70 minutes at maximum suction power and 110 minutes at minimum suction power. Which is not bad at all, especially considering the presence of an always-on camera, and an AI system managed directly by the robot: all features that need more computing power and, therefore, more energy.

What didn't drive me crazy is the charging base which, as often happens with these models, is too light and tends to move, increasing the risk of losing the home point for the robot. Nothing that cannot be solved with a little adhesive tape to be placed between the base and the floor, but it is still something to take into consideration.

The official price of the Trifo Lucy is 579,99 euros on Amazon, but through our coupon (found in the box below) you could take it home discounted at 521,99 euros. And it is useless to go around it, at full price I would hardly feel like recommending the purchase, but taking advantage of the discount things change. Trifo Lucy it is undoubtedly an innovative product, very different from all other robot vacuum cleaners, which makes artificial intelligence and the recognition of its strengths and which absolutely does not make you feel the lack of a LiDAR navigation system.

The suction power is not among the strongest on the market (or in the price range) it is true, but the cleaning is still quite deep and the possibility of using it as a surveillance camera is an added convenience that many could appreciate. . The real weakness of the Trifo Lucy however, it is the floor washing system: the water container is very small and there is no solenoid valve to manage the quantity of liquid distribution. In short, it is something on which the company should have focused more, also because in 2021 it is now a feature that can no longer be overshadowed.

Buy the Trifo Lucy at a discount on Amazon with our coupon!