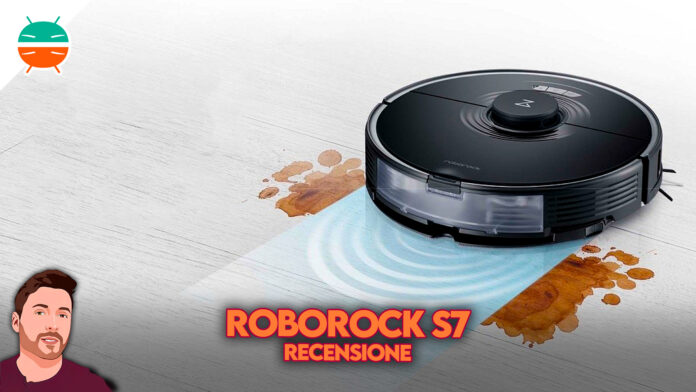 If there is a credit to be given to Roborock, it is that the brand born under the protective wing of Xiaomi was the first to bring the quality of cleaning, washing and mapping to the mid-range, to which we are now accustomed. And if it is true that among the robot vacuum cleaners that I liked the most in 2020, the undisputed king was the Roborock S5 Max (released after the Roborock S6), it is equally true that this "fame" fueled my curiosity in testing the brand new Roborock S7, the latest addition to the lineup, which continues to bring with it the typical quality of the brand, enriching it with some very interesting features.

Il Roborock S7 is the first robot vacuum cleaner and floor cleaner to use the much discussed automatic mop lifting system, thanks to which - should it detect rugs or carpets - it will lift the soaked cloth by 5 mm, optimizing cleaning. And it does so thanks to an ultrasonic recognition system, which allows it to automatically set all the “no-mop” zones.

In short, it is a very interesting product, which, however, I already tell you that something is missing: the self-emptying base, which will arrive only in a few months on Amazon, but which can be purchased at a price of 299 euros.

Roborock S7 Review: It is the smartest robot, but it is missing one thing

The packaging of the Roborock S7 it is very compact, and rather thin in terms of accessories. However, it contains everything you need to start using the robot immediately, and includes - in addition to the main unit - essentially only the classic charging base.

Before going into detail about the design and the materials, I immediately give an answer to a question that many are asking: the difference between Roborock S7 and Roborock S5 Max fits in a larger liquid tray (300ml) and the motorized mop which is also capable of vibrating as well as lifting.

That said, the robot has the classic look of all Roborocks. The shape is circular and at the top there is the laser tower for mapping the house through LiDAR sensors. From this point of view, in short, there are no particular technological innovations, and all the management of the floor plan is entrusted to the front laser, assisted by the various fall arrest sensors and an additional laser sensor. In a nutshell, the absence of a 3D object recognition system (like the one we saw in Dreame Bot L10 Pro) makes it a little more "clumsy" and violent when you go to approach more compact objects, such as the feet of a table.

Always above there are three physical buttons and a status LED, which will move continuously during the cleaning phase and which can be of two colors: white while only the suction is active, and blue while washing is also active. The water container has been positioned laterally while, by opening the upper part, you can find the one for the dirt which, to be honest, with its 470 ml is not among the most capacious in circulation. Those of Roborock, however, have managed to optimize the space up to the last millimeter: the Roborock S7 it will be able to fill it practically in every part, which might seem obvious but which in reality is not found in all robot vacuum cleaners.

Below, then, there is a new central brush, which has changed in shape and in the coupling mechanism and which has two purposes: the first is to totally avoid the entanglement of hair or hair, the second is to make self-emptying possible. with the new turret. The new Auto-Empty Dock in fact, Roborock will use the robot's suction nozzle, as well as an additional HEPA filter system that will be inserted right into the base for self-cleaning.

Also in the lower area a very small ultrasound sensor has been inserted, which will be used to manage all the functions relating to washing (or suction). In a nutshell, with this sensor the Roborock S7 it will immediately recognize rugs or carpets and adapt its cleaning characteristics to optimize washing: it will interrupt the flow of water, raise the mop by 5mm from the ground and increase the suction power.

Mop which, among other things, uses the lifting motors also in the opposite way to increase the pressure made on the floor: the mop of the Roborock S7 it is able to apply a pressure of about 600g at the washing point which, together with the vibrating system of the mop (which will move up to 3000 times per minute) makes the new robot vacuum cleaners the "king of washing". Because yes, it can really wash floors, but with a cons: the mop will get a lot more dirty and you will be forced to wash the only cloth that comes out of the package, practically after every cleaning.

To animate the Roborock S7 there is a 2500 Pa HyperForce engine which, yes, is not the best in terms of numbers. On the market there are much more powerful models, which even reach 4000 Pa but, precisely because of its reduced power, the new Xiaomi robot has highlighted a detail that practically no one considers: the quality of cleaning is not given only by suction, but also by the quality of the brushes. Because although it is perhaps "underpowered" compared to the vast majority of models, thanks to the new central brush and the already tested single side brush (and despite the 12 cfm of air flow it generates are lower than the average of the other Roborocks), the Roborock S7 manages to guarantee excellent suction quality.

Seamlessly captures dust, large and small specks, pet hair and hair, 100% avoiding any tangling whatsoever. But despite the lower potency, there is one thing to underline: Roborock S7 it is absolutely not among the quietest robot vacuum cleaners, above all because of the vibrating mop which - for mechanical reasons - is quite noisy.

The suction modes are 4 and vary from the most powerful to the quietest, but what really amazed me is its ability to thoroughly clean the carpets: arrived on a carpet, the sensor will increase the suction power but the real magic lies in it. will do the new central brush whose rubberized structure is practically perfect also for this type of surface. In short, if I had to recommend a robot vacuum cleaner for vacuuming carpets, the Roborock S7 it would be my first choice. However, this is not the case on mixed surfaces, but we will talk about it shortly.

As for washing, there is poco to say. The plate to which the mop is connected is able to perform from 1650 to 3000 vibrations per minute, also adjustable via the app according to your needs, and it is precisely this high frequency of vibration (much higher than that seen in the other models with vibrating mop) which really allows him to clean the floor: most of the stains will go away but at the price, as I told you, that the mop will have to be washed several times.

On the excellent mop lifting system then, I would like to make a note: the 5 mm lifting could be fine on rope fiber carpets and a little less in long fiber ones, where the robot could be immersed in the fabric. But, ok, you can't expect too much, also because through the app it is possible to set the no-mop zones. However, it must be said that the robot's reaction times, i.e. how long it takes from detecting the carpet to completely lifting the cloth, are not very fast. It will therefore not be surprising if the carpets get a little wet along the edges.

Il Roborock S7 it is managed by the well-known app that owns the company. It is one of the best applications in the industry, the first that introduced all the advanced features we have become accustomed to by now, and one of the most accurate also in the representation of the LiDAR mapping.

The management of maps and rooms, which are created completely independently, is identical to what we have seen in the other robotic vacuum cleaners and floor cleaners of the other Xiaomi brands: it will allow you to associate a name to each room, in order to facilitate cleaning in zones or in rooms, which can also be repeated twice consecutively by activating the function.

You can also activate the scheduled cleaning programs, each of which can be customized according to cleaning methods, areas to be cleaned and - clearly - at the time and it is possible to manage with extreme simplicity also the virtual walls and exclusion zones: in this way it will be possible to prevent the robot from cleaning beyond a certain boundary, or in a particular area of ​​the floor. Finally, there is the possibility of resizing or moving the carpets.

Then there is the possible control with digital assistants. Roborock S7 it is compatible with both Google Home and Alexa, and with Google's digital assistant there would also be the possibility to command it, with the voice, to clean a single room. Personally however, I have not been able to use this feature.

The battery integrated in the Roborock S7 it is the typical 5200 mAh that we now see in the vast majority of robot vacuum cleaners, and is able to guarantee excellent autonomy. To clean an environment of about 100 square meters, with maximum suction power and the maximum amount of water distributed on the floor with maximum vibrations, the Roborock S7 in about an hour he consumed poco more than half of its battery. Which suggests that in rooms up to 200 square meters there should be no problem. The best thing, however, is that thanks to the larger water container, there will not even be the need to refill the liquid during cleaning.

The charging time, however, continues to be rather slow: for a full charge it will take about 300 minutes.

The price of Roborock S7 is 519 euros on GeekMail, but I advise you to always check the box below, to check if any discount coupons are available. And without going around it too much, it is an extremely balanced product, it does not excel in everything it does, but it always does it well and with excellent results. Maybe there are better robots in vacuuming, but in washing it has no comparison.

Ok, the introductory price is not cheap, compared to other robots it is quite large and heavy and compared to the Dreame Bot L10 Pro, for example, I liked it more in washing but less in suction. To complete the work, Roborock just has to start distributing the self-emptying base, and perhaps think of selling it as a bundle with the robot rather than as an accessory to be purchased separately (which raises the total amount to spend a lot).