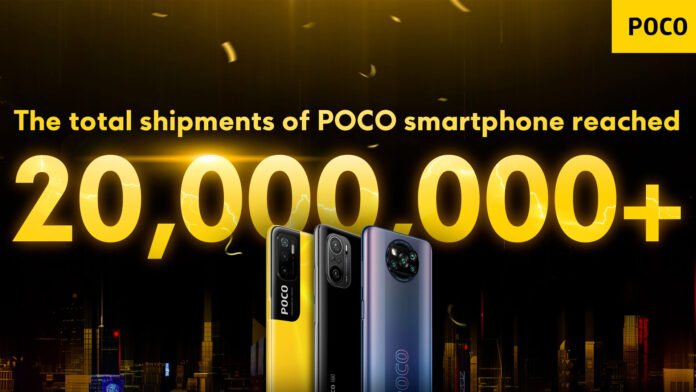 It fell almost exactly 3 years ago on the day thebirth announcement of the sub-brand POCO by Xiaomi. A decision that thus gave way to the sub-brand strategy implemented by Xiaomi, as demonstrated in the following months, first with the launch of Black Shark and then with the spin-off of the Redmi brand. A strategy that has paid off, bringing Xiaomi on the crest of the wave, winning first place in the ranking of smartphone sales in the world. Since its inception, Xiaomi has sold more than 800 million smartphones around the globe and those branded models also fall into this sum POCO.

20 million POCO sold to date: the company celebrates the milestone

It all started in August 2018, when it was presented Pocophone F1, a smartphone that broke the market by bringing back the concept of “flagship killer”. Such was the success that F1 sold something like 700.000 units in just 3 months, quickly becoming an ideal choice for those on a budget. poco but have a valid smartphone. Recall that it was a low-cost version of Xiaomi Mi 8, sharing specifications such as the Snapdragon 845, an IR facial recognition, stereo speaker and an even larger battery.

Despite the success, in 2019 the brand POCO did not make headlines, as no new model was launched. We will have to wait until 2020, the year that will see the split of POCO from Xiaomi, thus proclaimed itself an independent sub-brand. A news that raised various controversies, as the models that were born after (POCO X2, F2 Pro, M2, M2 Pro and C3) were none other than rebrand of Xiaomi smartphones (Redmi K30, K30 Pro, Redmi 9, Note 9 Pro and 9C). The company motivated this strategy, however, foreshadowing a progressive change towards a more original direction.

And in fact, from that moment on, POCO has shown that it can launch more or less original models than Xiaomi. I think for example of POCO X3, M3 and M3 Pro, even if the tactic of the rebrands remains, as they demonstrate POCO F3, F3 GT and X3 GT (Redmi K40, K40 Gaming and Note 10 Pro 5G). The fact is that in these 4 years of life, POCO managed to sell 20 million smartphones in the world. An important milestone, considering that it has a fairly limited catalog and poco capillary in the world. And it is especially noticeable when you consider that Realme, also born in 2018 as a sub-brand of OPPO, has already reached the 100 million units sold. But OPPO's is a much more active sub-brand, especially in a big market like China's.