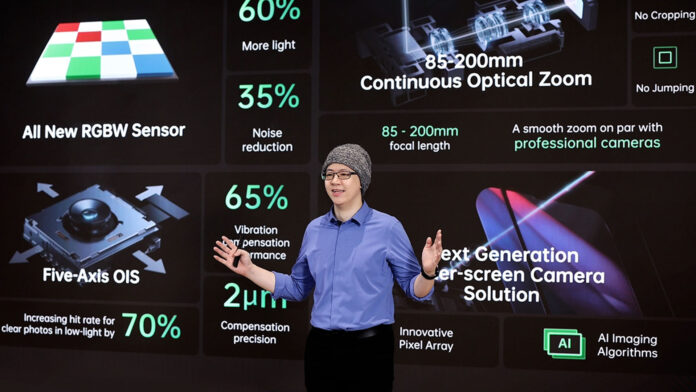 It is from poco concluded theOPPO Future Imaging Technology 2021, the event with which the company wanted to show the world the photographic innovations it is working on. Together with Xiaomi (and before Huawei), OPPO is one of the Android manufacturers that is making the most of efforts to raise the bar when it comes to multimedia quality. Not surprisingly, the Find X series has known climb the DxOMark ranking of the best camera phones, although the competition is still tough to beat. The event was presented by Simon Liu, director of the imaging division, so here is what news we will see on the next OPPO top of the range.

OPPO's new camera will be better in various respects: here are which ones

It usually takes 18 months to witness a new cycle in camera evolution, especially when it comes to hardware evolution. As Simon pointed out, the three aspects to focus on when it comes to camera quality are brightness, sharpness e chromatic fidelity.

We start, therefore, from new RGBW sensor, made by OPPO with the goal of increasing its sensitivity to light in mind. Normally to get more light you either increase the focal aperture of the lenses or the size of the sensor. But this type of changes risks affecting the size of the camera and therefore of the smartphone. For this, OPPO has chosen another approach, changing the pixel structure of this sensor. "RGBW"Stands for"Red Green Blue White“, Since a set of white sub-pixels has been added to the classic RGB grid. It is not the first time that we have seen such a sensor: the first to have it was precisely OPPO R7 Plus and its Sony IMX278 way back in 2015. But at the time it had flaws: too much moiré effect and he wasn't accurate with colors.

What OPPO did to improve the sensor was first of all to eliminate the crosstalk effect, that is the dispersion of internal light between adjacent pixels. This DTI technology (Deep Trench Isolation) thus allows each pixel to process only the information it receives, improving color accuracy. Furthermore, the proprietary algorithm OPPO Square uses a Pixel Binning technique that greatly reduces the aforementioned moiré effect. Thanks to the new white sub-pixels, the sensor receives more information and no longer has to approximate the colors of certain parts of the photographed scene. It should be noted that, for the first time, such an algorithm is natively inserted into the sensor, benefiting any smartphone that uses it.

All these technologies make OPPO's RGBW sensor receive up to 60% more light and has 35% improved noise reduction. If you are curious to see it in action, OPPO has confirmed that the first smartphone to have it on board will arrive during the Q4 2021.

The second novelty of the event is the system of continuous optical zoom, or the "next big thing”When it comes to telephoto lenses. We recently saw it with Sony Xperia 1 III, but I'm pretty sure that from now on it will also take hold on other brands' camera phones. So far we have been used to having fixed zoom lenses. Take for example the Huawei P40 Pro + and its two 3x and 10x telephoto lenses. This means two sensors with a fixed focal length of 80 and 240mm. As long as you shoot at 3x and 10x, therefore, you will have an optimal image, with all the information that the sensor can obtain. But it is paradoxical that shooting at 2x and 9x, for example, can result in a worse image, despite the telephoto lenses in question.

This is because, being fixed lenses, all focal lengths in between can only be achieved by digital cropping and zooming. But not only that: having to rely on two different telephoto lenses means relying on two sensors that are almost always different, therefore with different focal apertures and pixel sizes. This leads to a probable inconsistency in terms of colors, brightness, field of view and general quality.

To compensate for these limitations, OPPO has therefore introduced its continuous optical zoom system, inside which there are moving lenses that allow you to vary the focal length. Their displacement is made possible by a new motor with long stroke drive shaft, thanks to which they have a stable and precise movement, as well as a greater zoom. In support of all this there is also the Prismatic OIS, essential to compensate for vibrations when shooting with very distant zooms. In addition to the moving lenses, two aspherical lenses have been added to minimize light scattering and further increase the optical zoom effect. The result is a system that allows for a variable focal length from 85-200 mm. This means a photographic sector able to offer an optical zoom that starts from 3x up to 8x, optically covering all intermediate measures.

Let's move on to the third novelty, or the new optical stabilization system OIS to 5 axes. Since the concept of optical stabilization was introduced in the world of smartphones, it is almost impossible to do without it. At least when it comes to camera phones, that is smartphones that must return the best photo that can be obtained. The advantages of having an OIS system are reflected in several respects, primarily in the photos, allowing the smartphone to return shots without micro-blur effects. Not to mention the increasingly advanced Night modes, which thanks to the OIS allow us to take long exposures without the need for a tripod. Obviously the other advantage is in the videos: without some kind of stabilization, the obtained clips would all be choppy. Sure, there is electrical stabilization done via software, but often the result can involve artifacts and visual effects poco pleasant.

Here, therefore, that the new OIS system created by OPPO compensates for movements from 2 to 5 axes. A compensation system that acts on moving the lens horizontally and vertically, moving the sensor horizontally and vertically and finally rotating the sensor. This configuration has a compensation of 2 µm, 65% more effective and with 70% more chance of obtaining a photo without micro-shake in low light. And not having generous dimensions, this OPPO OIS system can be implemented without major problems in today's smartphones, even with large sensors. For this novelty we will have to wait a little longer, with the first smartphone that will arrive in the course of Q1 2022.

Selfie camera under the screen

Finally, one could not fail to speak of cameras under the screen, another topic in vogue these days. We have seen recently Xiaomi Mi MIX 4, ZTE Axon 30 e Samsung Galaxy ZFold 3 make use of it and OPPO is also preparing to do the same. But the reason he hasn't done it yet is probably because he's waiting to have a camera in his hands without the defects attributed to the aforementioned models. With the second generation of sensors we have seen a significant leap forward when it comes to the screen. This means that the portion of the display in front of the hidden camera no longer features that unsightly pixel grid. However, the quality of the shots is still not optimal and is a step backwards compared to traditional selfie cameras.

Of this topic, OPPO has already talked a few days ago, specifying how its new generation of under-screen cameras have several hardware advantages. In this round, however, Simon Liu focused on the part related to algorithms, explaining how they work. The software component focuses on 4 aspects, in this case: diffraction compensation, fog removal, HDR and white balance. The combination of hardware and software makes OPPO's under-screen camera the first to meet multiple standards at the IEC certification body. These standards include gamma correction, reflectance, transmittance and display uniformity, diffraction, and color and brightness retention. All nice words, but we can't wait to see it actually in action.