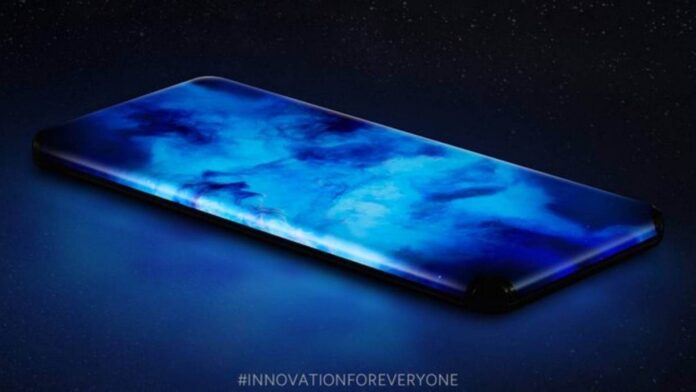 Lei Jun's company amazes early on with a concept smartphone quite spectacular, a device characterized by curved edges Waterfall on four sides and which could represent the prelude to the future Xiaomi Mi MIX 4! After remote wireless charging, Xiaomi continues to focus on innovation and this time it strikes with a device with a futuristic look but certainly more manageable than Mi MIX Alpha.

07 / 07 Update: Xiaomi has registered the patent dedicated to its concept phone. A step towards a commercial version of the device? Find all the news directly at the end of the article.

Xiaomi Mi MIX 4 may not be far off: could this concept smartphone with waterfall display be its prelude?

There is obviously no certainty that this smartphone has anything to do with Xiaomi Mi MIX 4 but above all it is not known whether or not it will arrive in a commercial version. However - as seen at the beginning - it is impossible not to combine this model with I MIX Alpha: it is as if Xiaomi had taken the best of its experimental device to transform it into something more usable (and human). The result is a smartphone with Waterfall display on four sides; moreover it is a solution with a screen without interruptions - notch and hole - therefore with camera under the display.

Similarly to Mi MIX Alpha there are some useful edges, with notifications lateral. It also appears that the main icons are located on the right edge, in order to maintain a clean look on the front. There are not buttons physical and therefore the device is likely to use solutions virtual pressure sensitive, placed sideways. In short, it seems that Xiaomi has applied all the new features seen with the Alpha model, but giving up the Surround panel.

On the back there is a camera with a rectangular layout, consisting of a single sensor and the LED flash. Based on what was unveiled by the Chinese company itself, the concept smartphone with Waterfall display presents 88 ° curved edges and advanced techniques for glass folding and lamination have been applied. Xiaomi has announced that it has filed at least 46 patents during the development of this particular smartphone.

Agatha Tang, Product PR of Xiaomi Global, also confirmed that he was able to view and touch the real product with his hand. At the moment Xiaomi has limited itself to announcing and showing the device but only as a concept: will it ever arrive on the market? For now there is no confirmation; furthermore, its commercial name is not known. However, as specified at the beginning, it is almost impossible not to come up with a possible Xiaomi Mi MIX 4. Will it really be so? Fingers crossed!

Xiaomi's smartphone concept has a small step forward and from an "experimental" device it could become something more. The device seen last February, presented by Xiaomi for demonstration purposes, was approved by the Chinese intellectual property body on July 6 2021. As anticipated by the renderings, the flagship adopts a curved panel on four sides, able to wrap the edges. Not only does it have physical buttons, there are no notches or holes. The selfie camera is directly integrated below the display while charging should be wireless only.

As for the main photographic sector, the back houses a very particular module. The details are not clear - given that Xiaomi itself has focused only on the display, during the presentation in February - but we will have one single lens (possibly from 192 MP o 200 MP); below it an unspecified space. It is not known whether it is a photographic sensor or a particular module. However, it does not appear to be a Second Display as for My 11 Ultra.

Wanting to stay grounded, it is poco likely that this concept smartphone can find application in close proximity (despite the registered patent). Mi MIX 4 it is getting closer and closer but we don't think it will have such an extreme look; regarding My 12, bringing such a style into the main top series is on the verge of surreal. We will likely see the doorless waterfall design in the not too distant future, but for now it's still early for this kind of news. Do you agree with us or would you prefer such a flagship already with one of the next Xiaomi tops?

Europe decides: mandatory single charger, but there is a big doubt