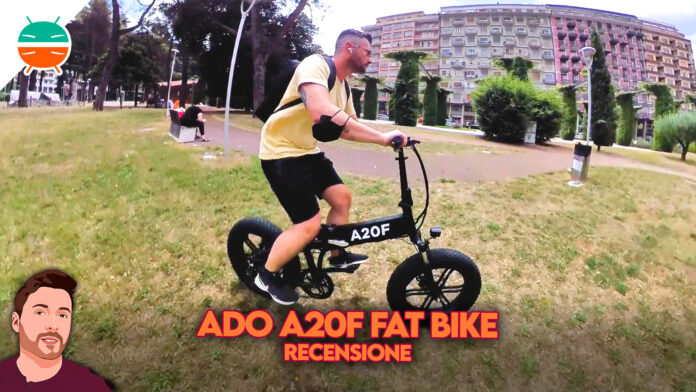 When a few months ago I tried the ADO A20, the first wish that came to my mind was to see the excellent Chinese electric bike in a fat version. Because if it is true that it was one of the most fun and pleasant models to drive in the city, the thin wheels and the engine not really suitable for dirt roads left me satisfied, but not entirely, precisely because of the size and weight rather important of that model. And so I thought: “ok, I like it, but at this point I'd like to see it in a fat bike version”.

Then it was time for ADO A16, a much more compact, lighter and perfect model for the city, which in no time was followed by ADO A26, an inexpensive electric mountain bike suitable for everyone (even for those who, like me, are not a lover of the genre).

And now the circle is closed: ADO has da poco made his official A20F, the fat bike version of the A20, thus completing the lineup of its pedal assisted electric bikes. And he did it with a very, very interesting model: it has a 500w brushless motor, if unlocked via the secret menu of the on-board computer it is able to reach about 35 Km / h, it has a battery with a good autonomy and costs relatively poco, if we consider the prices of the other exponents of this segment. It's perfect? No. But it is certainly one of the ADOs that I liked the most. But by now you will have understood, also because I have said it several times in the reviews of the Fiido M1 and Fiido M1 Pro: I'm a fat bike guy.

The first difference between the ADO A20F and the ADO A20 lies in the fact that the bicycle is already delivered with semi-inflated wheels. Only the pedals and saddle need to be fixed, and while it may seem like a small thing, the fact that you don't have to inflate your tires is a great thing. I remember that with the A20 it was not a very pleasant experience precisely because the tires were totally deflated and out of the rims but, fortunately, with the ADO A20F this "boredom" remains only a memory.

In any case, once the saddle and pedals are fixed, the bicycle will be immediately ready for the first use, although my advice is to make sure that the wheels are inflated to the right pressure, using a pressure gauge.

If you liked the design of the ADO A20, you will probably like that of the ADO A20F. The concept of the frame is very similar to the previous model but, given its fat bike nature, with some differences. For example, the design of the rear frame changes, in favor of two much thicker bars (and more beautiful in my opinion), the handlebar - which becomes clearly higher - also changes and the front and rear fenders disappear: it is a shame to see there ADO A20F so "naked" (it does not even have a luggage rack as we see in more expensive models), but I am convinced that it was a choice born also with the intention of reducing noise and vibrations to a minimum. I remember that one of the biggest flaws of the ADO A20 was precisely the noise of the plastics and components, a problem that with the ADO A20F has been totally eliminated: it is extremely quiet, despite using the same battery pack as the previous version.

In the ADO A20F then the closing system of the central frame also changes, the safety lock is now integrated in the very solid handle, and there is still no safety plug for the charger input: and this is one of the things that left me the most perplexed, especially since we are talking about an IPX5 certified electric bike.

It weighs 34 kg with the battery which, as we will see shortly, also affects the performance of the engine, and thanks to its many adjustments it is perfect for people with heights ranging from 160 cm to 190. Even the pedals are foldable, and front an elastomer double fork shock absorption system has been included which yes, it is sufficiently rigid, but which is not accompanied by any other rear shock absorbing system: it would have been nice to see the ADO A20F equipped at least with the same sprung seat we saw in the A20, or with the damping system of the Fiido M1 Pro, but this is not the case.

Poco bad though, because the very large 20 "diameter and 4" thick wheels are not only suitable for practically any type of road surface, but do an excellent job of absorbing shocks and vibrations, which really makes poco the lack of a rear warning system was influential.

On the handlebar, in addition to the on-board computer which may not look beautiful but is one of the most complete that I have ever seen on a product of this category, there are also the buttons for the horn and the night lights (which, let's face it, are made with a plastic to say the least poco light), an accelerator that is hidden in the right knob, and a small box in which a USB port has been integrated: with this device it will be possible to recharge your smartphone on the go, using the battery of the bicycle.

To animate the ADO A20F a 500w brushless motor takes care of it which, if unlocked via the secret menu of the on-board computer, allows the bike to reach up to about 35 Km / h: it is clear that speed depends a lot on the type of road surface, on the weight of the driver and tire pressure, but it is always good to remember that in Italy there is a limit of 25 km / h for electric bicycles, so if you unlock the maximum speed you should do it at your own risk.

In any case, it is a good engine, not one of the most responsive I have had the opportunity to try, but I must admit that even in rather steep climbs it is able to give good pedaling support. To put it to the test, I tested it on a nearly 35% repentant climb and there, it must be said, it couldn't do much to help me move forward.

I tried it on sand, gravel, crushed stone and - above all - on the bad roads of Avellino and I admit that there is poco to criticize the ADO A20F. Thanks to the ADO G-Drive system, the delivery of torque and power is optimized, and the engine is able to start in a progressive and controlled manner and then deliver the maximum available torque: it will seem nonsense, but in reality - above all under certain conditions - the difference is there and it shows.

The transmission takes place thanks to a 7-speed single chainring, managed by the typical Shimano Turney gearbox with click control positioned on the right side of the handlebar, able to guarantee a quick, effective and very precise gear change. I never had the need to adjust the precision, from the first use, which I cannot say for the two mechanical disc brakes, made with a double 160mm rotor mounted with a 6-hole attachment: out of the box the braking was too long, but it took poco to find the right cable tension. If we want to be honest, however, on a bike like this, with this mass and with an engine of this power, I would have liked to have found a hydraulic braking system. But the price would go up dramatically.

The battery of the ADO A20F it's a 36v at 10.4 Ah, and let me tell you: I immediately thought it was a slightly underpowered battery for the type of bicycle. We are at very different levels from the 48v and 12.8 Ah of the Fiido M1 Pro, but the presence of the ADO G-Drive system tends to almost eliminate the difference in terms of engine thrust. In terms of autonomy, however, there are differences.

In pedal assist mode, I managed to reach about 67 km with the maximum output from the engine. In full electric mode, on the other hand, I have di poco exceeded 35 km of autonomy. And ok, this is not a record performance, but considering the weight of the bicycle, my weight and, above all, the shape of Avellino, I must admit that this is a pretty good result.

As for the charging time, we're pretty much on the same level as we've seen with the ADO A20: a full charge from 0 to 100% will take around 6 hours.

The selling price of the ADO A20F is $ 1049, but with the coupon you find below you could take it home discounted at around 823,54 euros according to the current exchange rate. And it is a decidedly tempting figure, especially considering that we are talking about a bicycle that you can ride on practically any road surface, with a powerful engine the right and that continues to bring with it the right value for money.

Ok, to be honest, they could have thought of inserting a rear shock absorber and a slightly more powerful battery, but in order to be able to sell it at this price from the day of launch, some compromises must be accepted. The fact is, that the ADO A20F I liked it to the point of being on the podium of my favorite electric bikes.

ATTENTION: for avoid customs duties, selected during the purchase shipping from China. The bike will still be shipped from Europe, with fast delivery and zero customs taxes! 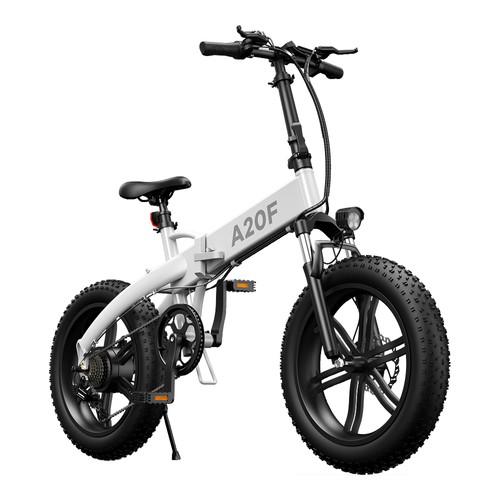