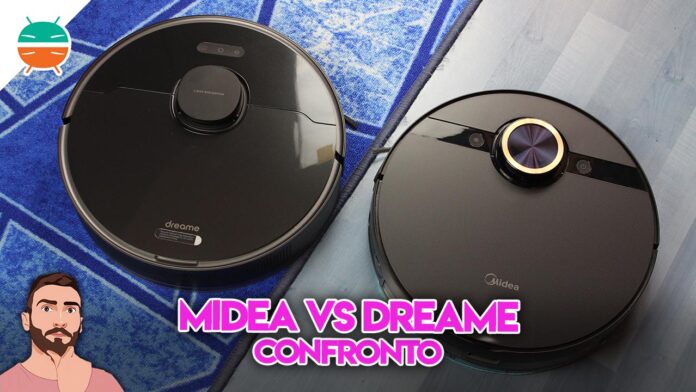 In recent months we have had the opportunity to really analyze many robot vacuum cleaners, but there are two models that have particularly attracted our attention for their quality / price ratio: the Midea M7 Pro and Dreame Bot L10 Pro. This is because both are a concentrate of power e tech since each of them has a particular functionality that makes them unique and that they go as far as one suction power equal to 4000 Pa.

So to understand which of the two could be the most suitable for your home, we decided to make a direct comparison. Who will be the winner? How will they have behaved in daily use? Let's find out together in our article.

Both sales packages are made of hardcover and are characterized by good equipment:

In this sector we hardly find products with an exclusive and alternative design, as their functionality almost always forces them to have the same appearance and the same shapes. In fact, both the Midea M7 Pro and the Dreame Bot L10 Pro they have a rounded shape with a turret on the back.

In terms of aesthetics, the opinion is always subjective, but between the two the Midea is what gives it a feeling of greater elegance seen the golden outline on the top and the matte treatment. The latter is objectively better, as the Dreamer which has a mirrored surface will tend to collect more dust during use.

For the rest I will not dwell much on other details, as They are very similar both as regards the sensors on board and as regards the wheels, filters or containers. What I want to talk about are two characteristic aspects of these two robots, namely the piezoelectric tank for the Midea M7 Pro and the new High Precision 3D optical sensor of Dreame Bot L10 Pro.

As for the first, on board there is this new type of tank from 250ml which integrates a motor capable of carrying out up to 500 vibrations per minute to ensure a more accurate washing than the classic robots. In addition, in order not to miss anything, we also find a traditional tank in the package.

As for the second aspect, however, the Dreamer owns a new sensor capable of identify obstacles more precisely present along the route. Despite this, in daily use I have not seen particular differences between the two robots, so I feel I have benefited most from the innovation of the Midea.

In fact, in comparison, the Dreame will also have a larger tank (270 ml), but even with a maximum water jet it is slightly less effective in cleaning (although sufficiently enough is reached).

From this point of view we are talking about two high-level robots, as for both we arrive at one suction power to 4000 Pa. Despite this, the noise is not that high because in the most excited moments we reach a maximum of 65 dB.

They both play a excellent work, as they are able to vacuum from the most difficult and coarse dirt to the finest one such as coffee powder, flour or classic dust. We have available 4 different suction modes ranging from Silent to Turbo, but we can also choose the automatic mode that will independently manage the suction power based on the surface and dirt. In addition, this will automatically recognize the carpets and, in addition to increasing the power, it will stop the release of water for washing.

On both we have one LDS laser turret that will map the house in a meticulous way and through the application of both we can also choose whether to set zones in which the robots must not enter or directly start the zone cleaning.

Although small, however, an advantage for the Midea M7 Pro in the aspiration phase there is. Indeed, unlike the Dreame we have an extra rotating brush (thus reaching 2 total), which allow the robot to clean even more accurately in the corners, without wasting energy and time.

Coming to the wash, here too the Midea it performs better than its opponent, as the fast movements of the piezoelectric tank allow the device to perform a much deeper cleaning compared to the classic wet cloth that is carried by traditional robots such as the Dreame Bot L10 Pro.

Usually with an average water supply we can cover about 200 m² with the Midea e poco di più with the Dreamer since it has a slightly higher tank capacity.

As for the software, both devices can be managed through their respective proprietary applications (both for Android and iOS), that is MSmartLife for Midea e Xiaomi Home for the Dreame.

Both allow us to perform exactly the same functions, i.e. configure the robot with the smartphone, start the first cleaning to map the house and automatically divide the rooms, set exclusion zones and virtual walls, check the maintenance of the internal components, change the various cleaning and washing mode, activate the do not disturb mode, schedule cleaning according to certain times and many other goodies such as the robot language or firmware updates.

In short, both are designed to be top in their segment, although personally I like the aesthetics and organization of the app more Xiaomi Home.

Under the beautiful polycarbonate shells of the Midea M7 Pro and Dreame Bot L10 Pro we find some batteries from 5200 mAh, which are obviously justified by a suction power from 4000 Pa which requires much more energy than the classic 2300/3000 Pa of the medium / low range.

Despite the same capacity, I managed to get up to with the Standard mode of use 180 minutes of use with the Midea e 150 minutes with the Dreamer. Overall, these are two excellent results since a cleaning in an average apartment between 60 and 80 square meters requires about 30/40% of battery, but between the two the Midea is the one that has performed better.

Personally I was satisfied because even with Turbo mode I was able to complete the house cleaning with even more than 55% of remaining autonomy.

After having thoroughly analyzed both devices it is time to draw conclusions, but first it is necessary to consider their respective placement on the market as well. In fact, the Midea M7 Pro it's available at about 279 € su GoBoo with the dedicated coupon (find the box directly below, at the end of the comparison), while the Dreame Bot L10 Pro is located around the 285 € (down to 262 euros) with coupon "618FAST30A".

Obviously, prices are only available with the discount codes that we share daily on ours Telegram channels from GizDeals. So I invite you to follow us there too because there are so many deals, price errors, flash and permanent offers.

In light of all this I believe that the Midea M7 Pro is the better of the two taking into account its quality in general, especially if the price is also taken into consideration. Autonomy, washing, cleaning and its cost are higher than its competitor, which still behaves well but which, in the face of a higher price, cannot offer that little bit more that can justify it.

NB If you do not see the box with the purchase link, we advise you to disable AdBlock.