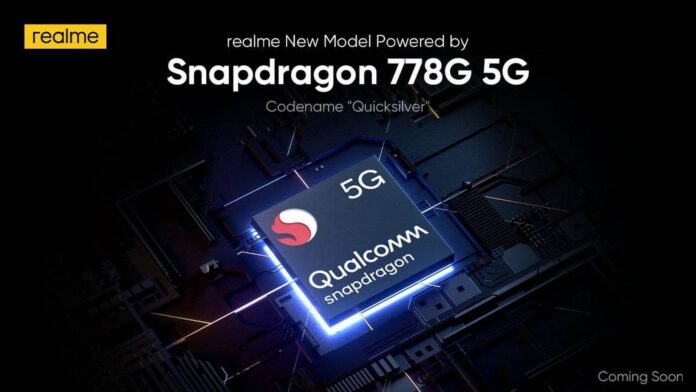 With the announcement of the Snapdragon 778G it was only a matter of time before the first confirmations from the Asian companies arrived: it is to open the dance Realme, with his smartphone "Quicksilver"!

22 / 05 Update: details appear on the possible presentation date of the device. Find all the news in the article.

Realme Quicksilver will be the brand's first smartphone with Snapdragon 778G

At the moment the Asian company has not revealed details about the new smartphone, merely revealing the code name and to confirm the presence of Qualcomm's chipset. Unfortunately, official news has not yet arrived but we have the first rumors about some aspects of the device. First of all there are rumors of a display AMOLED da 6.4 " with resolution Full HD + and an advanced refresh rate, up to 120 Hz.

For those who missed some details, Qualcomm recently unveiled its new 5G chipset, lo Snapdragon 778G. It is a 6 nm solution consisting of a Kryo 670 processor and an Adreno 642L GPU, with X53 modem, mmWave support, Bluetooth 5.2 and much more. We will find among the first smartphones to have this SoC on board Honor's 50 series, but also Realme he had his say about it, with the mysterious Quicksilver.

For now we know that the smartphone will be moved by the Snap 778G, while the first rumors refer to a battery from 4.500 mAh with advanced fast charging. Unfortunately the rumors are mixed and there is talk of 50W o 65W (or maybe two smartphones could be on the way). The photographic sector would see a main sensor from 48 MP, accompanied by two forms from 8 e 2 MP (maybe wide angle and macro).

Indiscretions on price and release date

At the time of writing, the Asian company has not yet provided details on the presentation date of Realme Quicksilver, the brand's first smartphone with Snapdragon 778G. To give an answer thinks the leaker DigitalChatStation: according to the insider, we will have to wait a little longer. The launch event would not be set for May, but for next 18nd June, date - obviously - to be confirmed.

Furthermore, the leaker anticipates that there will also be a smartphone us Snapdragon 870: whether it is the same model, perhaps in the standard and Pro version?

As soon as we know more we will update this article with all the details!

OPPO has patented its MagSafe, here are the prototypes

Huawei's next smart TV will be colossal