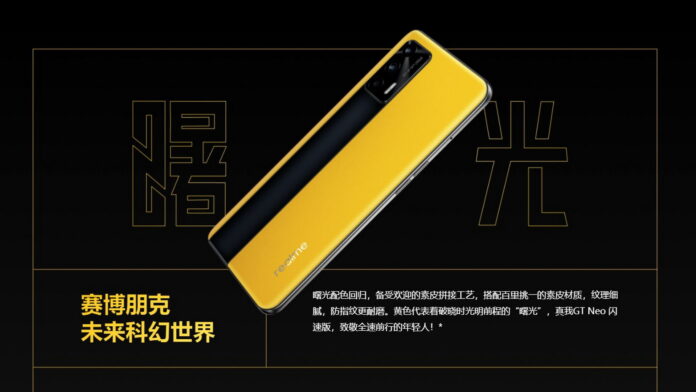 The GT family welcomes its second exponent: after the top of the range, officially arrives too Realme GT Neo. Although apparently they are almost identical, the two smartphones have substantial differences from a technical point of view. If a Qualcomm high-end platform was used for the Realme GT, a MediaTek was chosen for the new Neo model. But let's see in more detail what are the specifications of the new terminal.

25 / 05 Update: the GT Neo Flash model is official. Find all the news directly within the article, in the new section dedicated to the variant.

Realme GT Neo official: all the news for the medium / high range

If the GT version has brought a very "motorsport" design, Realme GT Neo will have an aspect that pushes more towards fantasy video games. This can already be seen from the name of the colors: Final Fantasy, Geek Silver and Hacker Black. The features of the body remain the same as Realme GT, with this one double finish running through the entire back cover. The dimensions are 158,5 x 73,3 x 8,4 mm and it has a weight of 179 g. It is therefore less heavy than the top of the range (186 g), but maintains the same battery (which we talk about in the paragraph "Hardware").

The diagonal of the display is the same, with a punch-hole screen Super AMOLED da 6,43 "Full HD + (2400 x 1080 pixels) in 20: 9 with a density of 409 PPI. Given the ambitions as a gamer, a high refresh rate screen could only be implemented 120 Hz with 360 Hz touch sampling. Regarding ergonomics, the fingerprint sensor is placed below the display and has optical technology.

For the management of the smartphone during gaming, GT Neo is equipped with a special mode to amplify the performance. But also of a system of cooling liquid with 3D tempered vapor chamber to bring the smartphone to low temperatures. As we have anticipated, the GT Neo battery is always from 4.500 mAh. The amperage does not change but the Dart fast charging drops, which goes from 65W to 50W. The connectivity department includes the modem 5G, along with Wi-Fi 6, Bluetooth 5.1, NFC and Dual-frequency GPS / A-GPS / GLONASS / BeiDou / QZSS. Worthy of mention is the presence of stereo speaker with Dolby Atmos certification. On the software side, then, we find the Realme UI 2.0 based on Android 11.

As expected, the photographic sector is not the trump card of Realme GT Neo. On the back, in fact, we find a triple camera from 64 + 8 + 2 MP f/1.8-2.3-2.4, consisting of a Sony IMX682 primary sensor, a wide angle from 119 ° and a lens macro. Not being able to count on a telephoto lens, the main sensor integrates the multi-frame synthesis technology. This is a feature aimed at improving the details of the images, so that you can enlarge and crop a detail without losing sharpness. For the selfie camera, however, we find a single sensor from 16 MP.

Realme GT Neo also debuts in version Flash Edition. But what changes? At this lap we have a battery double cell from 4.500 mAh (compared to the single cell of the GT Neo model) and a renewed fast charge. The device delivers 65W of power, just like the big brother GT. However, this is reflected in some parameters: the smartphone has a slightly greater thickness and weight (9.1 mm e 186 grams).

The rest of the specifications remain unchanged, both as regards the chipset (Dimensity 1200) and the photographic sector and the display. For details on pricing and memory cuts, take a look at the next section.

The standard Realme GT Neo is offered in the following configurations, with relative price (sales started in April 2021):

Xiaomi's smart fan will save you from the heat | Coupon