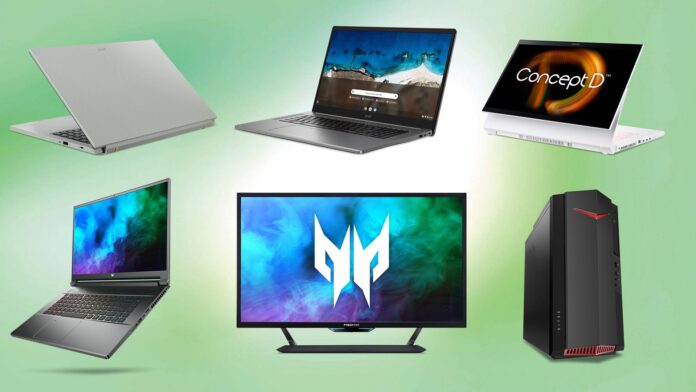 One of the most trusted brands on the consumer computing market is undoubtedly Acer. For years it has been committed to bringing laptops and desktop PCs of absolute value to the market between office, home and gaming and not least the new laptops Acer Aspire True, The first Chromebook da 17", A new TravelMate, new ConceptD, Swift X, gaming desktops Orion e Nitro, gaming notebooks Predator Triton ed Helios and much more.

Acer: here are all the new products presented

It starts immediately with a new notebook not so much in the technical specifications, but in the concept in which it is made. In fact, theAspire True is the first laptop made with the recycling of old notebooks, used for body and keyboard. The hardware configuration is equipped with Intel Core 11th Generation and Intel Iris Xe graphics card, as well as Wi-Fi 6 and up to 1 TB SSD.

The range for creatives ConceptD, with the 3, 3 Ezel, 5 and 5 Pro and 7 Ezel and Ezel Pro models, it is renewed with very thick technical features such as the RTX 3060, 3050i, A5000 and A3000 GPUs to get the most from the powerful Intel Core chipsets of eleventh H Series and Intel Xeon, for those looking for only the best. In addition, the ConceptD series is dedicated SpatialLabs, the first suite dedicated to stereoscopic 3D creators to achieve real-time rendering and interaction with their content like never before. The Italian price starts, respectively, from € 2.199 for the ConceptD 5 series, € 2.699 for the ConceptD7 Ezel, € 1.299 for the ConceptD 3 and € 1.499 for the 3 Ezel.

For Consumer users but without limits, Acer has relaunched the Swift series with the new Swift X, equipped with the latest configuration AMD Ryzen 5000 with Zen 3 architecture and GeForce RTX 3050 Ti graphics card, designed specifically for notebooks. It will be available in Italy from July 2021 starting from 999 €.

From laptops to gaming on Desktop PCs of which Acer is the historic manufacturer and which this time offers with the line Predator Orion 3000 e Nitro 50, equipped with 7th generation Intel Core i5000 or AMD Ryzen 3070 and above all the dedicated graphics cards RTX 3060 and 949 Ti, in addition to all the best specifications to be able to play to the fullest. The price of both starts at € 799 and € XNUMX.

They close the roundup of Acer devices still laptops but this time for gaming, with the Predator range Triton 500 SE e Helios 500/XNUMX/XNUMX, equipped with all the most extreme specs for gaming in the highest detail such as the 9th Gen Intel Core i11 and Nvidia GeForce RTX3080 GPU. In addition to them, we also find the Predator Connect X5 5G dedicated gaming router, the Connect Dongle D5 5G and the Predator Cestus 335 mouse. For those looking for solutions to be affiliated with their Desktop gaming machine, there are also the Predator CG437K S gaming monitors from 42.5 ", the Predator X38 S from 38" 2K + Ultra Wide and Predator X28 from 28 "with 155 Hz refresh rate.