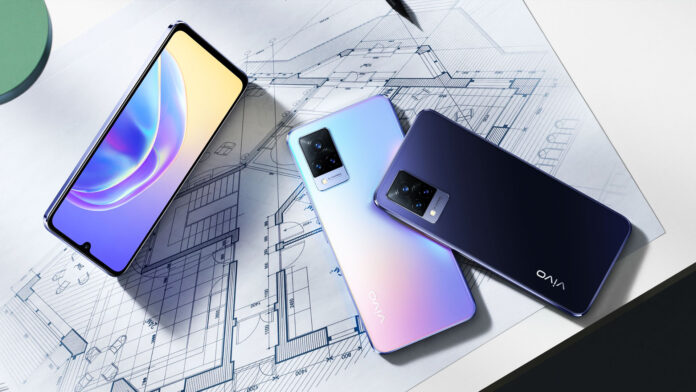 Even if only the X and Y series were brought here in Italy, the official launch of the new series vivo V21 reminds us of the heterogeneity of the producer. Like OPPO, vivo also has accustomed us to an extreme wealth of models, acronyms and denominations that often differ only according to the geographical area. But apart from this, the V series is another of the most relevant ones for the manufacturer, especially for the photographic sector. And this tradition continues with the V21, thanks to noteworthy features.

The vivo V21 family embraces the aesthetic style adopted with the most recent models, both chromatically and in terms of the forms of the photographic module. The variants and colors change, but we are dealing with smartphones rather thin, with a thickness of 7,29 and 7,38 mm. For the V21 and V21 5G models we have colors Sunset Dazzle, Dusk Blue and Arctic White, while for V21e those Diamond Flar and Roman Black.

Moving to the front, "modernity" is lost: instead of the canonical punch-hole screen, vivo has preferred to insert a notch to drop. But there is a very specific reason for this choice and it is to be found in a more complex technical sector for the selfie camera: we talk about it in the paragraph "Camera".

On all three models, however, we find 8 GB of RAM and 128 GB of storage, with technology Extended RAM to simulate up to 3GB of RAM more. To power everything there is a battery from 4.000 mAh able to recharge quickly via FlashCharge a 33W.

Moving on to the camera, vivo V21, V21 5G and V21e are equipped with the same triple camera from 64 + 8 + 2 MP equipped OIS, sensor wide-angle lens e macro. But the main peculiarity is the selfie camera da 44 MP with lots of autofocus, dual flash LEDs and stabilization OIS (absent on V21e). This is why the presence of the notch, an element necessary to house a stabilized sensor with a larger footprint.

In the history of telephony, only the HTC 10 sported this feature in 2016, but since then no manufacturer has used an optical stabilizer on the front camera. vivo V21 is thus the only one in the world to have it, allowing more stable 4K video selfies, as well as night selfies with increased exposure without sacrificing detail. The AI ​​Night Portrait mode allows you to benefit from these features even for portrait photos.

We invite all fans and interested parties to take part in ours community on Telegram, where you will find many fans of live!