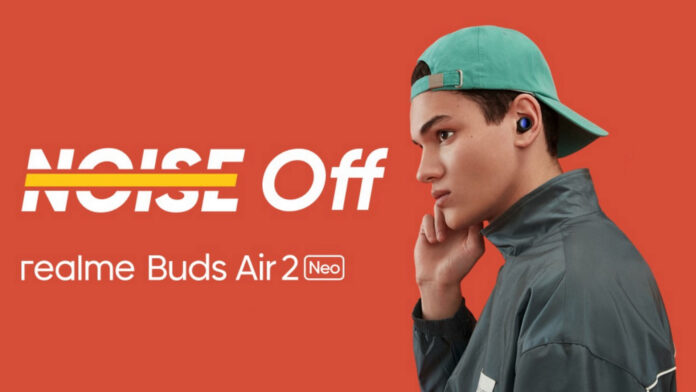 The new Buds Air 2 headphones have just been launched in Italy, solution with ANC at a bomb price, but in the meantime the Asian company is certainly not idle. In fact, here is the new compact TWS headphones with ANC Realme Buds Air 2 Neo, once again an accessory with interesting features and an inviting price.

Realme Buds Air 2 Neo official: all about the new TWS headphones with ANC

The design of the Realme Buds Air 2 Neo it detaches completely from that of the previous model; the latter, in fact, adopts a style closer to the standard Buds Air, with an elongated stem. In the case of the new Neo version, we are struggling with a look closer to that of Buds Q. It is therefore a couple of compact in-ear TWS headphones, but that in this round they raise the bar with a series of novelties, first of all the active noise cancellation ANC.

The earphones are available in Calm Gray and Active Black colors, they host a driver from 10 mm and there is no lack of resistance to type splashes IPX5. Connectivity relies on a chip Bluetooth 5.2 while the battery is a 480 mAh unit, which guarantees up to 28 hours of battery life (with case) and 20 hours with active ANC. In the case of individual headphones we are talking about approx 7 hours of playback and up to 5 hours with active ANC. Charging takes place via a Type-C port.

Just like the new Realme Buds Air 2, even in the case of the Buds Air 2 Neo the self-produced chip finds space R2, a solution that manages both ANC and ENC (Enviromental Noise Cancellation). According to what was declared by the partner, the ANC mode is able to reduce noise up to 25 dB; the modality is also present Transparency and that to low latency (88 ms) for gaming.

I controls take place through touch on the body of the earphones with the classic double and triple taps and a long press on both to activate noise cancellation.

The new TWS headphones with ANC Realme Buds Air 2 Neo they debuted only in Pakistan, via the brand's official website and al price about € 44 per change current (although they are currently on an introductory offer at a slightly lower figure). As for the release in other markets for now, everything is silent but it is likely that good news will arrive over the next few weeks.