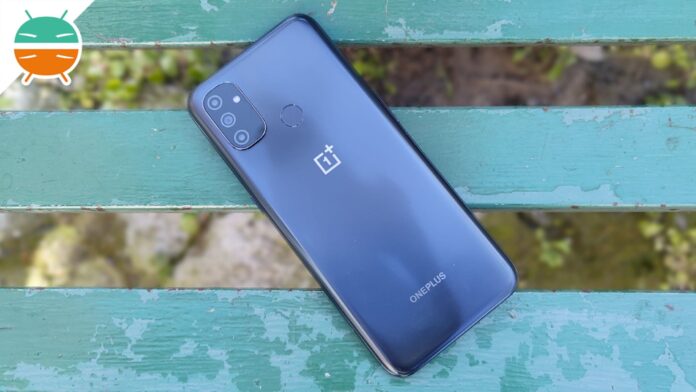 Talking about a top of the range is often easy, especially when it comes to OnePlus. But when you enter the vast world of entry-level, you have to deal with a range of devices for those who have very few demands, but often with important critical issues. And these are the conditions for the review of OnePlus Nord N100, the cheapest smartphone of the brand, but will it have been appreciated?

La package of North N100 it is as essential as that of any OnePlus, so with a charging cable, 18W charger, pin for the SIM slot and good manuals. In short, everything you need to use it out-of-the-box.

Il design of OnePlus Nord N100 in review it is anonymous, a very simple phone, vaguely reminiscent of the older brother N10 and very vaguely the top OnePlus 8T. Maybe it's okay for some to have it so clean, but sometimes a little more customization doesn't hurt. However, the construction is solid: despite the plasticky materials, it is appreciated for the touch and feel that perhaps some glass smartphones do not return.

In any case, it is not small, with dimensions from 164.9 x 75.1 x 8.9 mm and a weight 188 grams, thanks to the large battery of the smartphone. Looking at the components of the Nord N100, we have the power key on the right, the volume keys on the left side, the fingerprint sensor at the top center on the back, the lower speaker positioned next to the USB input and the jack from 3.5 mm. At the top there is only the microphone for the suppression of hiss.

The big "BUT" of this smartphone. In fact, the used for OnePlus Nord N100 is a panel IPS LCD da 6.52 " with resolution only HD + (1600 x 720 pixels). Maybe here we have a small step back from some competitors, but it makes up for it with the refresh rate a 90 Hz (adaptive only), not easy to find in its price range. At the top left is the punch-hole front camera.

In itself, the display isn't even that bad, the brightness is good and the content looks honestly. But the color calibration it is too charged, with the impossibility of being able to calibrate them and it is an important minus. To give you an example, faces in videos often tend to be red, so they are not natural. However, there is a modality comfort for the reading, not bad.

When in the title we say that the OnePlus Nord N100 it is the most honest entry-level, we speak mainly for what it offers in terms of performance. The hardware consists of the chipset Snapdragon 460, an octa-core from 1.8 GHz, equipped with one Adreno GPU 610, But also 4 GB RAM LPDDR4x e 64 GB of storage UFS 2.1, expandable up to 256GB.

Such a setup would usually clash with good performance, but as we'll see later with the software, everything is fairly balanced. We would dare to say that this is a smartphone with good loads, but that it takes a while to carburetor once the applications are open. There are no important lags and it still juggles sufficiently in the Multi-tasking.

For gaming, with Need For Speed ​​NL Racing it goes quite well, without maximum details, but you can play it satisfactorily. No problem with Brawl Stars. You obviously don't expect performance from Snapdragon 7xx o 8xx, we are very far.

And the shots reflect what is the equipment of sensors. With a lot of light they are certainly sufficient and are also enjoyable on the social side, but already with a little less light they lose quality, especially if we use the zoom 2x. At night the shots are absolutely revisable and mixed, but we cannot condemn a smartphone that still costs poco.

La front camera instead it does a good job, always with a lot of light, but even when it is not very bright the shots are not to be thrown away. If we were asked how a smartphone should shoot under the 200 €, we would indicate this photographic quality. For videos the visual quality is okay for the product range, but the audio capture is rejected, a real shame.

Small surprise in favor of the OnePlus Nord N100. Indeed, the little one of the house is equipped with stereo speaker, which is a small gem in its area of ​​expertise. It is not very powerful, but the sound is clean, you listen to the music with a certain quality.

Quality that obviously improves in headphones, both from the audio jack, both from type-C, and from Bluetooth. In the ear capsule they hear us very well, no critical issues.

For connectivity, it reaches up to 4G +, but it looks good and there are no problems whatsoever for the signal. No problem even in Wi-Fi. dual SIM but if you choose this solution you will have to forgo memory expansion.

For the rest we find precisely Wi-Fi Dual Band, Bluetooth 5.0, NFC, GPS, GLONASS, Beidou, A-GPS, Galileo, the aforementioned audio jack and USB Type-C with OTG support. Privacy chapter: fine and foolproof with fingerprint unlock (10/10 and in the newspaper he is not wrong) and excellent response also with Face Unlock even in the dark and with a mask.

A great, very great value. There OXYGEN it keeps everything afloat and works really well. Unfortunately it is stuck at version 10, but for the period used it has received two updates with security patches up to February 2021.

As well as the other OnePlus, there is the possibility to customize the whole interface quite completely. The software also offers excellent fluidity and pushes the North N100 even beyond some of its possibilities, therefore promoted.

Here we are in front of a battery phone. You want the chipset poco power hungry, you want the HD + display, i 5.000 mAh of OnePlus Nord N100 they last a very long time. It is really difficult to discharge the battery of this smartphone in one day, you can get there with a lot of peace of mind. In stand-by it is a small Highlander, so you will never have a problem with that.

Battery, however, that yes recharge only up to 18W, consequently the total recharge is not too fast. But this is a problem you will have to ask yourself later two days of use, so it's a good one.

After having dissected everything that makes up the OnePlus Nord N100 of this review, we need to sum up to understand what this smartphone actually is. If we look at the data sheet, perhaps it is behind smartphones like Redmi Note 9 (the 4/64 GB one) or Realm 7 for display and camera, because the fact that it is only one weighs like a boulder HD + panel in 2021.

But if we look at the user experience, then it can compete easily and indeed the software is certainly superior, with also the gem of the stereo speaker. Autonomy often rewards it and therefore for those who want to spend very little for a OnePlus, for a first smartphone for a child / elderly person or for a second smartphone then it is a choice to be evaluated. This is because the price list now costs 149 €, but it is also found under i 130 €, as to this link, and there it is not wrong to evaluate it as a purchase. Of course, though, if they had put that panel on Full HD +...