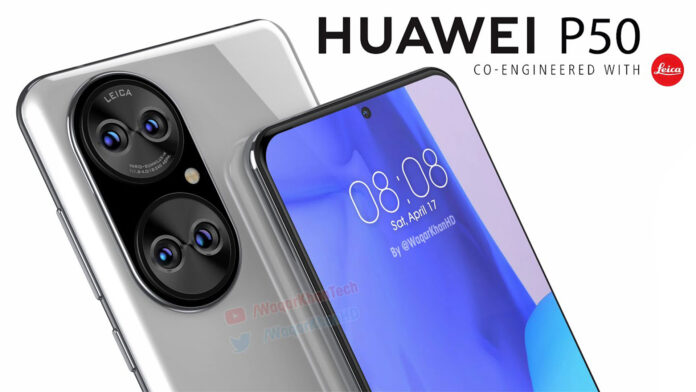 The first months of 2021 will be marked by the early launch of the new flagship series including Huawei P50 e P50 Pro. In recent months we have seen several rumors about their arrival, especially in the current context plagued by the US ban. In view of their official presentation, we have decided to collect all the rumors and leaks that will come out from here on out.

Upgrade 12 / 04: after talking about the first live photos of the alleged Huawei P50, let's talk about the delays and problems, especially the P50 Pro + version. Find all the details in the paragraph "Price and release date".

If initially we could only rely on speculations like this, even if we do not expect changes compared to the current P40 series, at least on the front, interesting details about the series begin to come Huawei P50. The rumors would confirm the supply of OLED by Samsung Display and LG Display, a sign ofpost-ban opening.

While P50 will keep the screen dish present on P40, with P50 Pro there may be a step forward in terms of curvature. Leaker Teme points out that there will be a difference compared to previous flagships. It will not be a Waterfall or Quad-Curved panel like Mate 40 or P40 Pro. However, the story that the always reliable renders of OnLeaks tell us is quite different. On Huawei P50 we see the flat screen confirmed…

… But on the P50 Pro we see a screen Dual Edge with a canonical curvature. No Waterfall panels like the Mate series, but not even Quad Curve like the P40. The curvature appears very similar to that of many other smartphones, with the abandonment of the double solution punch-hole. Even the ear capsule becomes more standard, compared to the magnetic type of the previous flagships.

But what could leave you most puzzled by these renderings is the form adopted for the photographic module of the Huawei P50 series. Both on the basic model and on the Pro (and let's imagine on the Pro +) a pseudo-elliptical module appears that takes up the shapes previously introduced with the Nova series 8. a Bump certainly original, if compared with that of the other top of the range, but which could polarize the taste of users.

After the sketches that came out on Weibo, the awareness that the design of the next Huawei P50 (including the Pro and the Pro +) will actually be what we have been profiling for weeks. Indeed, the leaker Teme (RODENT950) posted a cover that actually corresponds with the design of the renderings and industrial sketches, so it brings us closer and closer to the final version of what will be the next flagships of the Chinese company.

Based on the information circulated, a video concept shows us what the Huawei P50 should look like. The focus is all for the photographic sector, very different aesthetically from what has been seen so far on other smartphones. Huawei would have opted for some sort of double circular module contained in the main ellipse, with at least original shapes.

To further confuse the waters on how the Huawei P50 should look, there is an alleged prototype unpublished, shown online by the following live photos. The smartphone is totally different from what has been rumored so far and appears with a circular photographic module placed at the top left. In a way, it resembles the structure of Samsung's S21 series, with the module merging with the side frame. The shapes are very similar to those of the Mate 30, round and with a circular edge all around that appears to have an iridescent metallic finish. In front, however, there is a Dual Edge panel with double punch-hole for the selfie camera.

On the technical system of Huawei P50 and P50 Pro there are doubts about the shortage of internal components deriving from the US blocks. We know well how the impossibility of trade with TSMC has brought HiSilicon to its knees, forcing Huawei to fall back on solutions Qualcomm but especially MediaTek. Not by chance previously it was rumored as the P50 series could be based on the future MediaTek high-end SoC which should be the Dimensity 2000.

According to more recent rumors, however, the next top of the range would be more likely to move the same Kirin 9000 that powers the Mate 40, at least for the models Pro. Made with a 5nm production process and strong with its 15,3 billion transistors, it is one of the most powerful chipsets around when it comes to smartphones. The benchmarks also demonstrate this, thanks to an octa-core CPU (1 x 3,13 GHz + 4 x 2,54 GHz + 4 x 2,04 GHz), a 78-core Mali-G24 GPU and a dual-core NPU. From memory cuts we expect a minimum of 8 GB of RAM LPDDR5 e 128 GB UFS 3.1 storage expandable via NanoSD.

On board the basic model of P50instead, the unreleased would make its debut Kirin 9000E, a revised version down (relatively). Also because the destination of this model would be the one that usually belonged to the Lite model, which would not be in the plans.

As for battery and charging, according to Teme Huawei P50 Pro would be equipped with a 4.300 mAh. A battery that would be able to charge via cable a 66W, while in wireless to 50W.

On the software side, more voices seemed to point to the presentation of the "new" EMUI 11.1, as per tradition with every keynote of the P series. In fact, according to rumors, it will be the last version before the definitive transition to HarmonyOS, which would share the kernel.

Yet, according to new rumors, we learn that the Huawei P50 series will actually be the first line up of smartphones with HarmonyOS native, although they will not be the first ever to obtain such software. In fact, precisely for this reason the optimization and adaptation phase of this operating system is in its final stage and therefore may coincide with the release of the new P series.

In short, with the Huawei P50 it will lead the brand to a new conception of the market, which can be as much a risk as it can bring important advantages.

Like all Huawei flagships, Huawei P50, P50 Pro and P50 Pro + will also sport a photographic sector worthy of note. According to leaker Teme, the main difference between the three models will be represented by the quantity of sensors. On the base model there would be a triple camera with wide angle and classic telephoto lens, on the Pro the telephoto lens would be periscopial and on the Pro + there will be a penta camera with double telephoto lens.

A major novelty, at least for the two Pros, would be represented by the primary sensor. The unpublished would be used Sony IMX707Y with RYYB matrix, a 1 / 1,18 ", therefore with dimensions unchanged compared to the sensor of P40 and Mate 40. Strong news, however, for the wide-angle sensor, given that we are talking about the presence of the OmniVision OV64A, a 64 MP 1 / 1,34 "with lenses FreeForm. For the telephoto section, P50 Pro could boast one 5x optical zoom with RYYB sensor, while P50 Pro + a dual telephoto lens with 3x / 10x optical zoom. The fifth sensor on the Pro + should be the same thermometer we saw on the Mate 40 RS Porsche Design.

Although many details were known about the camera modules of the major models, there was still no precise information for the choice made on the basic model of the range. Huawei P50, which, however, thanks to the leaker Teme we now know, except for official changes: the main sensor remains the Sony IMX707Y (RYYB) from 1 / 1.18 ", while the ultra-wide angle is changed, in which theIMX600 da 1 / 1.74 " and the telephoto lens OV08A10.

After the many rumors and renderings on the shape of the camera module of the new P50 series, the first photographic samples of the camera appear on the net, thanks again to the leaker Teme Macro or in any case of Zoom present in the models of this line up of smartphones that promises to be more and more interesting. As we can see, although they are sample images, the level of detail is remarkable and confirms the enormous work of Huawei in the photographic sector, as always aided by the partnership with Leica, once again present for the flagships.

On exit period there are doubts, also due to the difficult situation the company is experiencing. Initially the leaker Teme stated that the debut of the series was set for April 17, confirming the presence of the three models. Furthermore, he said we probably wouldn't see the Pro + model right away. The latter would have been postponed, while only the Huawei P50 and P50 Pro would currently be in mass production.

Meanwhile, other rumors from China claim that the P50 series launch would be postponed to June. The reason would be linked to Harmony OS 2.0, whose launch was confirmed for that month. A confirmation is still missing, but it seems highly probable that the P50 series will be presented for the occasion, being the first to introduce it to the public. If that's not enough, however P50 Pro + there would be production problems that would see it available further delayed.

In all this, it is rumored that for the first time Huawei's top series could not be launched outside of China. For the moment it is still an indiscretion, but it would not surprise us because of the problems of production scarcity.