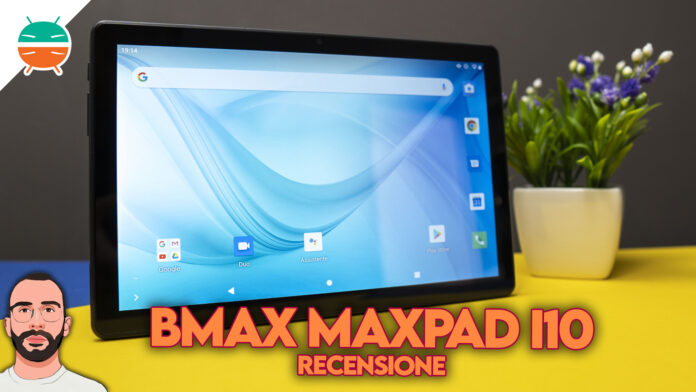 As much as the world of Android tablets may seem dead and in decline to most, the reality is another: it will be that the historical period in which we are living is something exceptional and extraordinary, but the sales of these particular devices are constantly growing. . You want for distance learning, you want for smart working tablets are currently in great demand: the most attractive price range is the one included between 100 and 200 €, within which the device we will talk about today, the BMAX MaxPad I10.

The brand may seem new to many, but the technical data sheet and its price (which I will not reveal to you already now) could make you turn a blind eye to the name.

La package of the device is made entirely of very simple cardboard; inside we find a minimal and essential equipment.

BMAX MaxPad I10 it is built, overall, quite well. The rear shell is made of plastic, the finishes seem premium to the eye and also to the touch (so much so that it is confused at first with a metal shell), with an opaque treatment that lets the fingers slip on the back; however it slightly retains the fingerprints on the body and from time to time the maniacs of order and cleanliness will have to pass a cloth to remove them.

Le dimensions of the device are 245 168 x x 8.8mm and a weight of about 550gr, perfectly in the average of 10 "devices; the comfort in use is good, the weight is well distributed and while holding it in your hand for a prolonged time its weight will not bother you. The assembly is solid and the materials are good.

The arrangement of the elements is well distributed on the various sides; at the top we find the trolley for 2 SIM cards next to two stereo speakers, on the left are the power button, the volume control, the USB-C input for charging and the microphone. The right and bottom sides are clean; there is also the input for the 3,5mm jack practically set in the upper corner of the tablet.

Given the arrangement of the various elements and the positioning of the speakers, it is clear that the BMAX MaxPad I10 is primarily designed for horizontal use.

The display of the BMAX MaxPad I10 it's a unit from 10.1 "inches with a resolution of 1920 × 1080 pixels on an IPS type panel. Technicalities aside, the supplied panel does not stand out and does not emerge particularly: ok it is essentially a panel able to satisfy 90% of users who will use it, it has a very good brightness and colors a little cold and poco saturated in some circumstances.

What disappointed me most are the not excellent viewing angles that do not guarantee us an optimal vision from various angles and in addition the oleophobic treatment is not enough, which will force us to clean the device no less than once a day. But hey, we're talking about a tablet that could come to cost poco more than 100 euros, and the quality it guarantees is well above the market average. Among other things, you will receive the device with already pre-applied a plastic film on board.

Another thing that puzzled me is that, despite the resolution, by observing the panel closely you can see the pixels with the naked eye: it is clear, however, that this is information that could go unnoticed by most and that does not compromise in no way to use it.

On a technical level, the BMAX MaxPad I10 it defends itself quite well: it has a processor on board UNISOC T610 Octa-Core 1.8GHz and one Mali G52-3EE GPU, accompanied by 4GB RAM memory e 64GB of storage internal expandable with MicroSD, provided, however, to use the tablet in Single-SIM and not Dual mode, since the slot is shared.

In daily use, the BMAX tablet does its job, and it does it well: a product like this, personally, I see it very suitable for social use, surfing the internet, playing movies and TV series on various platforms, areas where the device behaves very well and where it does not miss.

In gaming, an aspect on which tablets are not to be taken as a reference, performance tends to drop: by carrying out the usual tests with games like Call Of Duty Mobile I could see how the application runs in low details and with a framerate that is not overly high, which makes the gaming experience disappointing. On the other hand, the performance on lighter titles of the caliber of Fruit Ninja and similar is acceptable.

Le temperature of the BMAX during use stress are average, even if there was an evident overheating limited to the lower right part only during the various benchmarks performed in series.

The photographic sector is rather poor, even if it would be necessary to separate what we find on board a common tablet from what is the expectation on mobile cameras in general. We are more and more used to highly performing smartphones in photo shoots, but let's not forget that the use of a tablet is different from that of a smartphone. In short, who ever photographs with the tablet?

Having said that, BMAX MaxPad I10 is equipped with a camera back da 5MP with LED Flash (physically present but practically absent in the shots without light, given its total inefficiency) and one front da 2MP; both cameras also record video in 720p.

The reality is that the photographs I really am of low quality; in conditions of abundant light or in the presence of strong exposure (direct on the subject to be photographed) then the results are slightly better, but rather than assuming a "scanner" use and video call use, it is difficult to think of using it for anything else.

Same goes for the videos which tend to change the light balance often, negatively affecting the final result; overall the management of the lights is the worst aspect of this camera which could be better if managed better at the software level.

The compartment CONNECTIVITY is not overlooked: BMAX MaxPad I10 is equipped with GPS / Glonass, Bluetooth 5.0, Wi-Fi Dual Band and telephone form DUAL SIM 4G to make and receive calls. This aspect is interesting as it means being able to use a SIM card dedicated to him and also use Whatsapp, for example, for children struggling with distance learning and the exchange of tasks on class chat groups.

Reception is good, the audio quality is also excellent; it loses a few points in the 4G Speed ​​Tests with not excessively high values, but this aspect can perfectly be overlooked.

In addition, the device is equipped with two speakers at the top (landscape view); their quality is good, the equalization is adequate and the volume is well balanced. For a more “immersive” effect, I would have preferred the speakers to be positioned opposite and not side by side, but it's all about the details.

The version of the operating system Android installed here on the MaxPad I10 is the 10, with security patches updated to November 5, 2020.

However, a lance must be broken in favor of BMAX as this product actually runs well: web browsing is responsive, the use of the various productivity apps, social media, video calls run without particular problems and there are no slowdowns or blocks.

It is certain that we are not dealing with fluid system animations, particularly pleasing to the eye or anything else, but in fact what matters is that the performance is good, and this BMAX MaxPad I10 does it all, and does it well.

Alas, there is no certification Widevine L1 which will not allow you to play movies in FullHD on major streaming platforms such as Netflix or Prime Video.

The battery present here is from 6000 mAh, an average size compared to other competitors and which is able to ensure the coverage of a working day of 6-8 hours, always with various synchronized email accounts, some videos on Youtube in the breaks and some sporadic gaming use.

When viewing streaming video only on platforms such as Netflix or Prime Video, the device with maximum brightness consumes about 7-10% per hour.

I opened my review by telling you, at the beginning, that the price of the device would make you turn a blind eye to some things that are not particularly refined; here, the street price of the BMAX MaxPad I10 fluctuates from 120 to 150 € in standard periods, but in the presence of special coupons (by the way, you are already subscribed to the GizDeals Telegram channel? There, for example, you could find coupons for this device) you can go down to 100 € which makes it, in essence, the purchase of the century. Always check the available discounts at the bottom of the article.

In its favor, the device has a good battery, and a technical sector that really lacks nothing: the presence of the telephone module will make you prefer this MaxPad I10 to many other products in circulation.

Instead, we must turn a blind eye to the photographic sector: but come on, have you really ever taken really USEFUL photos with one of these devices? I do not think so. 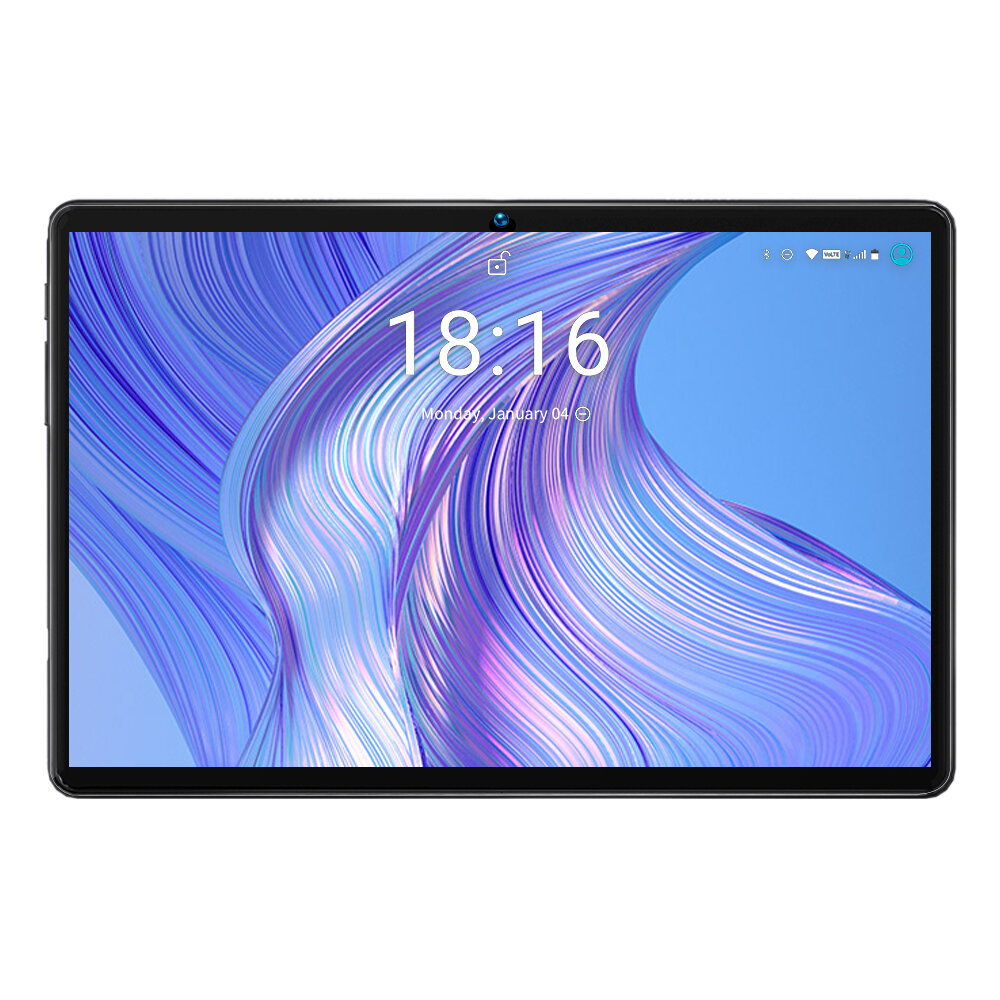