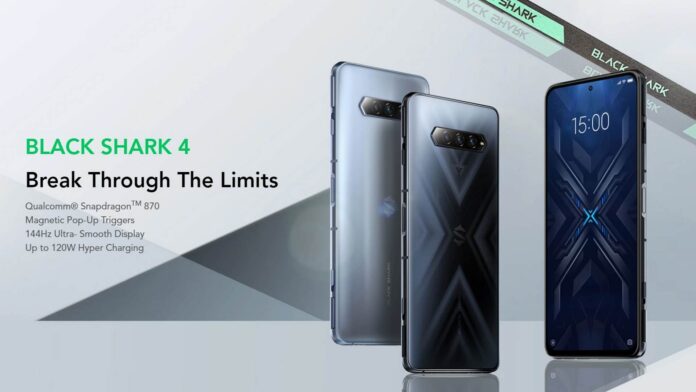 Most Mi Fans only have eyes for others Xiaomi Mi 11, not to mention the various rumors that are popping up about the futures Redmi Note 10 e K40. In the midst of all these news, here is also the next gaming flagship Black Shark 4, which is also accompanied by the usual variant Pro: here's everything you need to know about technical specifications, price, release date and availability in Italy of the new series for gamers.

Black Shark 4 and 4 Pro: everything you need to know about top gaming swims

The design of the new Black Shark 4 e 4 Pro it stands out for being more “simple” (relatively) compared to the past, given that a print of the body was chosen instead of physical blocks which, however, gives it much more elegance. Also, goodbye to the camera with triangular bumper, since a horizontal solution in the center has been chosen, probably more ergonomic for playing.

And just for gaming, once again Black Shark has applied to its new models i physical triggers clickable, as well as the previous 3 Pro, with an adaptation mode based on what type of game we are playing.

Moving on to the display side, we have for both a solution from 6.67" AMOLED E4, it is also the first gaming series with punch-hole, although it is very small (a bit like POCO F3 and K40). The refresh rate goes to 144 Hz, with a touch sampling a 720 Hz, with very low touch delay a 8.3 ms. In short, you will have fun playing.

Black Shark this time it has also expanded the range of colors available, adding a Blue and Pink color to the historic Black and Gray.

The hardware, of course, is the most awaited sector of the new ones Black Shark 4 e 4 Pro. This time the brand wanted to create two bands of competence, one represented by the model 4 equipped with a chipset Snapdragon 870, while the other of the 4 Pro obviously with Snapdragon 888. So, the GPU of both of them also varies: Adreno 650 for the first, Adreno 660 for the most performing model.

On the memory side we have the real "revolution". Not so much for the 8 / 12 / 16 GB di RAM LPDDR5, with technology RAMDISK, the 128 / 256 / 512 GB UFS 3.1 adopted for i Black Shark 4 e 4 Pro, as for an almost unprecedented feature of a smartphone. In fact, according to what the brand says, a SSD array optimized by the company, which should manage memory like a PC. Obviously, being an absolute novelty and above all not yet well specified in the presentation, we reserve the right to postpone you until we have more concrete news, but there has been a change of pace.

The battery is also another chapter to consider, since it is a module from 4.500 mAh which, however, uses a very fast recharge from 120W, which should fully charge the two Black Shark in about 15 minutes, setting new charging records. For audio, already awarded by DxOMark, we have a symmetrical stereo speaker (linear 1216) totally renewed and made of very high quality, also including the headphone jack. Present NFC, Wi-Fi 6 and 5G. The fingerprint sensor is placed on the side.

The cooling system inserted in the new ones is also very interesting Black Shark, since it uses a liquid technology "sandwich" since there are two rooms that are placed above the internal compartment of the two smartphones. This leads to a lowering of temperatures by over 30%. Finally, for the software we have the Joy UI 12.5 su Android 11, which supports the exclusive "tablet mode" and the "barrage notification 2.0".

Black Shark 4 Pro scored 788.505 points in the first benchmarks on Antutu (where it appears with the code name kaiser), a record value that exceeds the assumed OPPO Find X3, Qualcomm's official values than those of Xiaomi Mi 11. Furthermore, the leaker specifies that it is a trial version and that the final model could even reach 800.000 points.

The side camera it should be, in a smartphone designed for gaming, the sector less taken into consideration. Still, Black Shark 4 and 4 Pro do not spare themselves excellent sensors. Starting from the base model, we have the same configuration already seen on Redmi K40, therefore 48 + 8 + 5 MP with main sensor Sony IMX582.

For the 4 Pro model instead, it goes up to 64 MP for the main sensor Sony IMX686, confirming the wide angle from 8 MP and the Tele-macro from 5 MP. The selfie camera is for both a sensor, closed in a 2.76 mm punch-hole, from 20 MP.

Black Shark 4 and 4 Pro - Price and availability in Italy

And then we come to the part of the price and the availability of Black Shark 4 e 4 Pro, obviously with regards to Italy. The producer has decided to put the fifth and to become very competitive with respect to both the "little ones" like iQOO Neo 5 o Realme gt, but also towards the "Big" Red Magic 6 e ROG Phone 5.

Product sold and shipped from the official store

Product sold and shipped from the official store