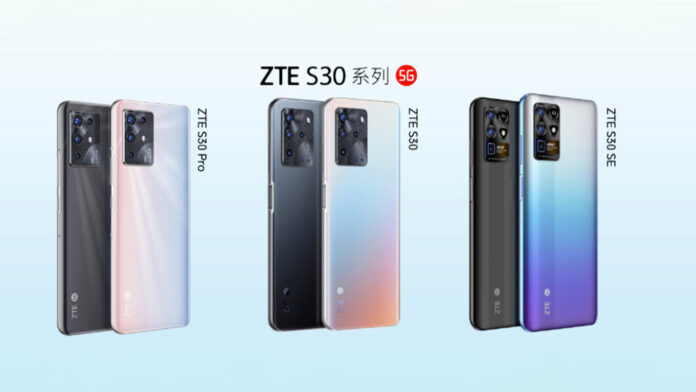 ZTE is certainly one of the telecommunications giants in China, with a large presence also on a global scale. For years, its products have included smartphone, distinguished by the line ups Axon e Blade, which make use of a new range called ZTE S series, with the first models S30, S30 Pro e S30 SE think with technical specifications and price suitable for young people.

From the Weibo account of ZTE we have the images that tell us a little about how smartphones of the Series S. As we can see the choice of design and coloring, it ZTE S30 Pro it has a pink / purple iridescent shell and a camera bumper top left with a very particular design with glitter livery.

Same fate forS30 base, which has many similarities with the older brother, but the iridescent gradation has a different texture. Finally, theS30 SE it has a more mid-range style, with a back cover reminiscent of the new one Realme 8 Pro, with a shiny frame and with a camera bumper that loses the peculiarity of the glitter.

The camera is the one that clearly distinguishes the various models. In fact, for S30 Pro we will have a main sensor from 64 MP and other 3 sensors from 8 + 2 + 2 MP which result in a wide angle, a macro and a depth sensor. For the selfie camera there is a sensor from 44 MP punch-hole.

Also for ZTE S30 we have a quad camera with main sensor from 64 MP, while the other 3 are from 8 + 5 + 2 MP in the same way as in Banco Pro. Change the selfie camera you are waiting for a 16 MP. Infine, ZTE S30 SE has a triple camera module, the main one of which is a sensor from 48 MP, while the other two are from 5 + 2 MP with wide angle and macro. The selfie camera is the same 16 MP of the basic model.

For the battery, ZTE announced that theS30 Pro has a module from 4.200 mAh, having a quick charging a 55W which will then allow you to recharge it very quickly. On S30 instead there is a form from 4.000 mAh with recharge a 30W, while for S30 SE there is a large battery from 6.000 mAh presumably with refill a 18W.

For the software all three models adopt the new one MyOS 11 based on Android 11.