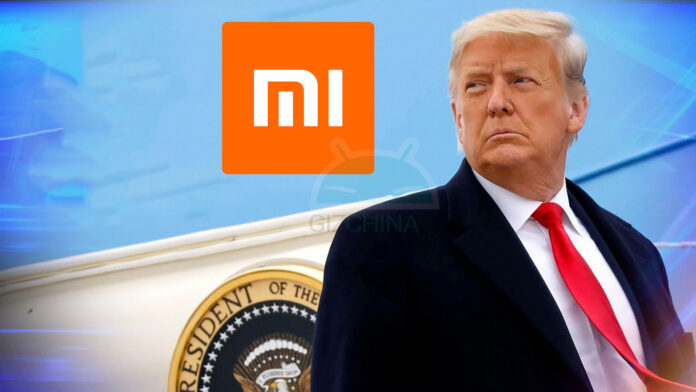 There are a few days left for Joe Biden to take office as president of the US, but Donald Trump closes with a "beauty" by expanding the USA ban even against Xiaomi. After reliable sources such as Reuters, the news was confirmed by the parties involved. This is how Lei Jun's company (and eight other companies) entered the infamous blacklist of the American defensive authorities. At this point we must ask: what will be the consequences of this decision by the American government? We assess the situation.

Upgrade 13 / 03: the Court agreed with Xiaomi against the Ban requested by the US Department of Defense. Find all the details at the end of the article.

The US ban also arrives for Xiaomi: the Trump presidency puts it on a blacklist

As reported by Reuters, the administration led by President Donald Trump has decided to ban Xiaomi, for a total of nine Chinese companies. Among the well-known names on the list there is also the aircraft manufacturer Comac; in any case, American investors will be banned from participating financially in the companies involved, as well as the sale of current shareholdings. The ban will officially take effect from the next one November 11 2021, therefore it will be necessary to understand if during the Biden presidency something will change or not.

A move that follows the previous one by a few days ban against Chinese payment apps, with the desire to reaffirm the position that sees the USA and China as opposed on the economic / political level. If you would like to deepen the subject, I suggest you recover my editorial on the subject.

READ MORE:
Xiaomi could be working on the 160W super charging

Why was Xiaomi banned?

The motivation for the ban signed by Donald Trump configures Xiaomi and other companies as "involved with Chinese military companies". For the same reason, the chipmaker has also recently SMIC and the famous drone manufacturer DJI have been blacklisted. According to the US government, the company has a role in the violation of human rights in China against the ethnic Uyghurs. Still on this thorny topic, not so long ago Huawei has been accused to have developed a facial recognition system used illegally by the Chinese state.

What will the consequences be?

It is still early to say whether the ban against Xiaomi will have the same exact consequences of those that happened to the rival company Huawei. But in light of the latest updates, it is noted that Xiaomi is in the blacklist of the American Department of Defense. Conversely, Huawei also figures in the Entity List of the Department of Commerce, in which Xiaomi is not present (for now).

Being linked to Chinese military services is a heavy accusation, especially in the geopolitical context in which we currently find ourselves. We recall, in fact, that Xiaomi has suffered repercussions of this type even in an important market like that of India. While still a country where it sells a lot, Xiaomi has faced several difficulties, between more stringent quality controls but above all the ban your apps e acts of vandalism against the Mi Stores.

Will Xiaomi be able to continue to use Google services?

Therefore, barring future changes, Xiaomi will not be trading with Western companies. This means that Xiaomi devices should not have the same problems as those produced by Huawei. For the moment, therefore, we can remain calm about Google services: Xiaomi smartphones will continue to work as always and update as expected.

What will happen when Joe Biden is president?

This is an interesting question that we have tried to answer in this article.

After USA ban, Xiaomi has seen fit to release a communique official to reassure all customers and fans of the brand. According to what was reported by the same Chinese house, all will continue to run smoothly e a work normally. This is not to say that things will not move behind the scenes: Xiaomi has already confirmed that it will take the appropriate measures to protect the interests of the company and shareholders.

In fact, we remind you that the ban affects US investors who own Xiaomi shares: reality like Google o Qualcomm they will continue to work with the Chinese company, at least until further notice. Obviously, as usual in these cases, we have to see how the situation will evolve. We hope that January 20 will arrive as soon as possible and that the transition will go smoothly.

"This announcement was made by Xiaomi Group (the “Company / Enterprise” and its subsidiaries collectively referred to as the “Group”) at the request of the Hong Kong Stock Exchange Limited. The company noted that the United States Department of Defense issued a press release on January 14, 2021 (US time), stating that the company has been included in the relevant list in accordance with Section 1237 of the Law on Security. 'National Defense Authorization for Fiscal 1999.

The company has always adhered to legal and compliant operations and complied with the laws and regulations in force in the place of business. Its services and products are used for civil or commercial purposes. The company confirms that it is not owned, controlled or related to the Chinese military, nor is it defined in the US NDAA Chinese Military Company.

We will take appropriate measures to protect the interests of the company and shareholders. The company is examining the possible consequences of the accident to fully understand its impact on the Group. The company will release further announcements in due course. Potential shareholders and investors are advised to exercise caution when trading company securities.

US Defense and Treasury Departments sued by Xiaomi | 30/01

Xiaomi's first action arrives following the ban imposed by Departments of Defense and of the US Treasury. In fact, the company has sued the US state bodies expressly asking "illegality”Inclusion in the investment blacklist. In the lawsuit filed, filed in the District of Columbia Federal District Court, it is explained as to whether it should persist and whether the restrictions would take effect, Xiaomi would meet "imminent, serious and irreparable losses". The secretaries of the two departments Austin and Yellen were also cited in the case. In short, the game seems to have just begun, but it is understandable how the new US directives will be decisive for the future.

Almost two months have passed since the news of the US ban against Xiaomi and we discover new details on a story that is looming to say poco absurd. The Trump presidency has accustomed us to sudden and often botched-out justifications. And it would seem that the dispute with Xiaomi makes no difference. It all started because according to the US presidency, Xiaomi would be a company affiliated with the military sector of China. But what is the motivation behind these heavy claims? A report from the Wall Street Journal reveals this to us, after the reason was reported to the court of the Department of Defense in the case against Xiaomi.

In 2019, CEO Lei Jun received the prize "Outstanding Builder of Socialism with Chinese Characteristics" by the Ministry of Industry and Information Technology. An award that was given to a total of 100 Chinese executives and which is advertised on the CEO page on the official website. The award comes from Xiaomi's efforts in research and development in areas such as 5G e artificial intelligence. The question that arises is: is an honor really enough to be banned by the US government? Apparently yes.

It seems that the matter between the US Department of Defense e Xiaomi is finally close to closing. In fact, yesterday March 12, according to reports Bloomberg, the district judge Rudolph Contreras officially stopped the Ban, defining the move as "capricious"And"arbitrary"And also that the same has deprived the company of the rights for a due process.

Incidentally, the same judge stated that Xiaomi he would still have obtained a complete revocation during the course of the dispute and for this he issued an initial injunction to prevent the Chinese company from suffering "irreparable damage". Finally, Contreras further motivated his choice by declaring: "The court is somewhat skeptical that important national security interests are actually involved here". For its part, Lei Jun's brand has stated that it will continue to move in order to declare illegal the labeling of its connection with the military forces and permanently remove the designation.

On the matter, the same company, through a spokesperson, released an official statement.

“Xiaomi is pleased to note that on March 12 the Court ordered an injunction from the US Department of Defense to prevent the implementation or enforcement of Xiaomi's designation as a CCMC. In accordance with the provision granted, the Court completely and with immediate effect canceled the restriction of the Executive Order 13959 which prohibited US companies from purchasing Xiaomi's shares and the obligation to sell their shareholdings.

Xiaomi once again reiterates that it is a widely controlled, publicly traded and independently managed company that offers consumer electronics products exclusively for civil and commercial use. Xiaomi also believes that the decision to designate it as a Chinese Communist military company is arbitrary and unreasonable, and the court is of the same opinion. In any case, Xiaomi intends to continue asking for the illegality of the designation and its permanent revocation.