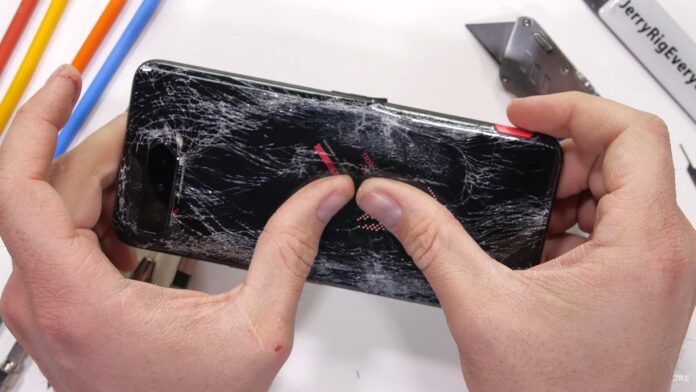 With the launch of the new ROG Phone 5, ASUS has brought to the nth degree its gaming division for smartphones. It's a smartphone with a lot of high-end features, starting with the Snapdragon 888 in it. But also the 1 billion colors AMOLED screen at 144 Hz, fast LPDDR5 and UFS 3.1 memories and a huge 6.000 mAh battery that can recharge in less than an hour at 60W. Not to mention the Republic of Gamers-style sci-fi aesthetic and the entire ecosystem of accessories. And like any good flagship flagship, ROG Phone 5 has also come under the clutches of JerryRigEverything, with a not exactly positive outcome.

ROG Phone 5 tested by JerryRigEverything: the test proves to be lethal

A bit like all the latest top of the range, the front of ROG Phone 5 is protected by a glass Gorilla Glass Victus. The latest generation of Corning protection promises more impact resistance, while the one against scratches is the same as always. This means that its display starts to scratch at grade 6 on the Mohs scale. Contrary to all the latest top of the range, however, ASUS has kept the bezels above and below the screen, but there is a reason. Although the look may appear less in step with the times, those who play will prefer to have side edges on which to rest the fingertips more easily.

Speaking of fingertips, the front of this new ROG features a fingerprint reader with optical technology, still the most widespread today. But this offers the side to wear, since a damaged glass can mean a worsening of the biometric scan. It must be said, however, that other smartphones with such a sensor continue to work without problems even with scratches on the glass above. At the same time, the OLED screen used is one of the few that is shown to be able to self-regenerate after being exposed to a flame. Not that it takes much, but it's okay to point this out.

ROG Phone 5 literally offers the side of Zach's bend test

A more than welcome "novelty" is the return of the entrance mini-jack, after ASUS had preferred to eliminate it from its predecessor. Unlike any other phone, the side frame of ROG Phone 5 houses capacitive keys for gaming, as well as a second USB Type-C port. In this way, recharging it while holding it horizontally during gaming does not mean having a cable between your fingers. However, JerryRigEverything does this as the rubber stopper which protects USB port and connector for accessories from being loose enough and therefore easy to lose.

But the real problem with having such a break on frame smoothness often has a structural consequence. And in fact we see JerryRigEverything capable of breaking ROG Phone 5, in one way very similar to iPad Pro. Other smartphones have also experienced such an end, as in the case of Redmi K30, in which the Achilles heel turned out to be the lateral ID sensor. What is certain is that it is difficult to apply such a force on the body.

OPPO and National Geographic together to photograph the beauty of nature