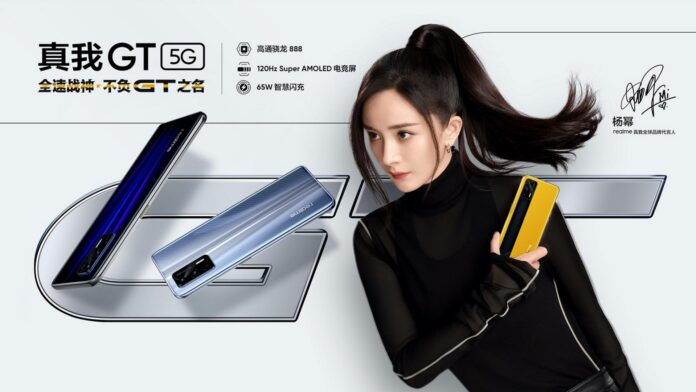 On the occasion of Qualcomm Summit and the launch of the new high-end chipset Snapdragon 888 - which will feed the vast majority of the top models of 2021 - the Asian company has also joined the party, announcing the debut of the next flagship Realme Breed. For weeks we have been using this name for the device but in reality the top of the range arrives on the market as Realme gt and will also debut in Europe: let's find out all the details on design, specifications and selling price.

We previously talked about the possibility of seeing the Ace series move to Realme. Regarding the future of OPPO's range, there is still no confirmation but now the location of the leaks appears much clearer. The brand's next flagship, in fact, was initially “announced” with the name of Realme Breed, which recalls the OPPO saga. But as we also specified at the beginning, the trade name is officially Realme GT 5G.

The new top of the range of the Asian house mounts a display AMOLED da 6.43" with Full HD + resolution (2400 x 1080 pixels), ratio in 20: 9 and refresh rate a 120 Hz. The selfie camera 16 MP is inserted in a punch hole, located in the upper left corner. In terms of surface / screen ratio we are talking about a 91.7% solution, with super optimized frames. The back houses a rectangular camera with triple sensor and dual LED flash.

As for the code name, the term "GT" wants to underline the peculiarities of the brand's new model: speed and high performance. Sky Li, CEO of Realme, confirmed the importance of Qualcomm as a partner of the company and confirmation has arrived on the use of the Snapdragon 888.

Memory side, the chipset is accompanied by 8/12 GB of RAM L and storage from 128 / 256 GB UFS 3.1. Based on various rumors, support was expected for the UltraDart Charge but unfortunately the device is not the first in the world to have a good recharge 125W. The top of the range in fact adopts a 4.500 mAh battery with 65W fast charging: a respectable power, but no 125W in this round.

From the hardware we then come to the first benchmarks for the Realme GT, which up AnTuTu rises on the shields with an important score of 770.221, which makes us realize how powerful this device is. True that it is a benchmark, but it bodes well.

Software side - easily predictable - we will find Android 11 in the form of Realme UI 2.0, second version of the proprietary interface of the Asian brand.

After Antutu, it is also up to Geekbench: the RMX2202 device - our Realme GT 5G - has been spotted on the benchmark platform. The flagship appeared with 12 GB of RAM, Android 11 and - obviously - it Snapdragon 888 (from the code name lahaina). The score settles on 1138 and 3572 points, respectively in single and multi-core.

Obviously the terminal relies heavily on the power and Gaming: we have a 4D haptic feedback system, the GT mode dedicated to improving performance during the game, Dolby Atmos / Hi-Res audio stereo speaker and an advanced cooling system.

The price of the new Realme GT 5G part from €372 at the current exchange rate, for the version from 8 / 128 GB. The variant increased by 12 / 256 GB it is offered instead at 3299 yuan, approximately €423 at the exchange. Recall that at the moment the debut took place only in China: sales will start from 10 March, both in the version in glass in that skin vegan for the back cover.

Details are still missing about the launch outside the country, however the international division has already begun to tease fans about the arrival in Europe.