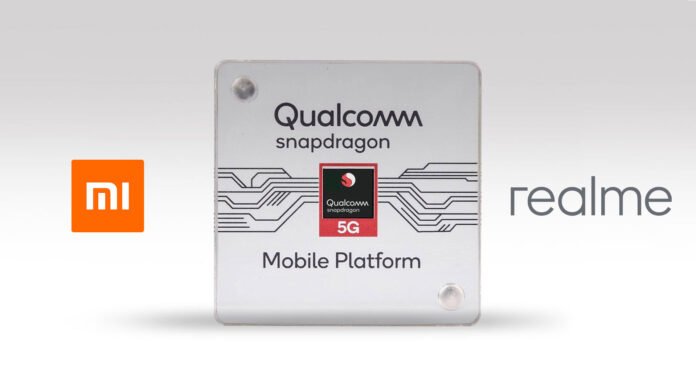 We've been talking about it for months, but the chipset problem begins to become more and more concrete in this first part of 2021, also for realities such as Qualcomm and partners like Xiaomi e Realme. The pandemic has put a strain on the world economy, not even leaving the technological supply chain intact. In particular, the production of chips, an indispensable element in the life of all of us, from the simplest elements to the most complex ones. And among the latter we find smartphones, with the telephone industry always proving to be very voracious when it comes to supplying chipsets.

Upgrade 12 / 03: New rumors from within speak of supply shortages affecting supplies from Qualcomm. We talk about it at the end of the article.

There are no more chipsets: Qualcomm at risk on Xiaomi and Realme

Chipmakers in the world can be counted on the fingers of one hand, but the almost total supply is in charge of TSMC. The manufacturer weaves the ranks behind names like Qualcomm e MediaTek, for which it physically produces the chipsets they have engineered. As much as TSMC is a giant, it is clear that it is easy to create a bottleneck which then affects the entire production line. If TSMC has a problem, Qualcomm has it too, and ultimately the telephone manufacturers, as in the case of Xiaomi and Realme. If I focus on these two it is not by chance, because it is precisely from these two companies that a rather worrying warning has been issued.

This was stated by the same CEO Lu Weibing, head of Xiaomi's Redmi division: there are no more chipsets. With a post on Weibo, Lu said: "The chips are gone this year, this is not a shortage, but an extreme shortage". A warning that was also taken up by the Realme management, specifying that "Qualcomm's primary and secondary components are out of stock, including power and connectivity chips". But it doesn't stop there. As a source inside the smartphone supply chain points out, Qualcomm has extended product delivery times to over 30 weeks, even reaching more than 33 for some components. It follows that reality like Huawei, OPPO, live e OnePlus are setting aside as many chips as possible, so as not to be unprepared.

The telephone industry is hurting others

This strategy affects the entire industry, putting in difficulty all those companies, especially non-telephone companies, which usually order chipsets in a more fragmented way. In a sense, the telephone industry is hurting other sectors, such as the automobile industry, which risk succumbing by not being able to meet this demand. Also because telephone components are often more “hungry” for components: just think that, with the same amount of power supply circuits, we have gone from being able to make 100.000 4G phones to just 20.000 5G phones.

In short, the situation is tense, also because this shortage of electronic material will be to the detriment of consumers. According to the law of the market, if demand rises but supply falls, prices also rise. Precisely for this reason, the Biden presidency is considering setting the stakes that they could hinder companies such as Xiaomi, OPPO, OnePlus and so on.

It is not often the case that a large corporation, such as in the case of Qualcomm, will openly expose itself to problems such as that of chipset shortages. But evidently we could no longer hide behind what is becoming evidence not of poco account and here is that the CEO Cristiano Amon spoke about it to CNET. He confirmed that the global shortage of semiconductors "it has an impact on everything, even on smartphones”And that it is not a problem that will disappear within poco time. Industry forecasts speak of a shortage of chipsets that should last at least until end of 2021.

Also according to Amon, if we find ourselves in this situation it is because the sharp drop in demand that took place during the first months of 2020 was followed by an increase in demand in the following months. An increase to which the various chipmakers have found themselves physiologically unprepared, unable to meet the needs of all companies in the world.

Lo Snapdragon 888 begins to spread around the world thanks to exponents such as Xiaomi Mi 11, Redmi K40 Pro, Samsung Galaxy S21 e OPPO Find X3 Pro, to name the main ones. Not to count the next ones OnePlus 9 and 9 Pro, as well as the flagships throughout 2021. But the production problems encountered by Qualcomm could also be reflected in the supply of chipsets for the main top of the range. A new Reuters report highlights how Qualcomm is trying to meet demand that risks exceeding actual supply. Anonymous sources within the sector speak of a chipmaker with problems in the supply of chipsets for the medium / low range of Samsung, as well as the Snapdragon 888 in general.

Samsung's representatives refused to answer the matter, while those of Qualcomm claim to be able to withstand the pressure for Q2 2021. However, the aforementioned sources say that several smartphone manufacturers would have scaled back shipments precisely because of this. SoC shortage. As this is not a Qualcomm-only issue, overall phone sales are expected to drop later this year.