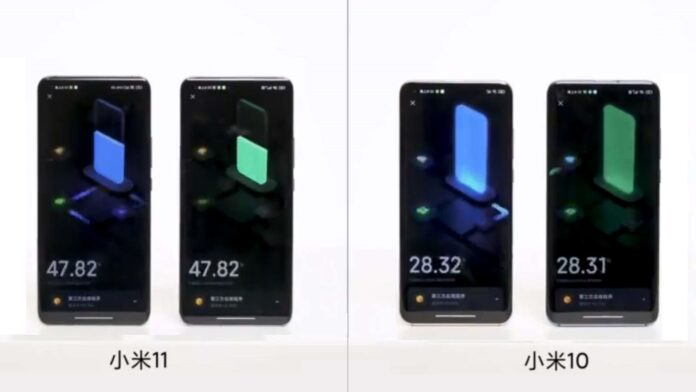 In the meantime, we await the launch of Mi 11 Global but also of We 11 Pro, the current Xiaomi Mi 11 is proving to have several aces up his sleeve. Already in first benchmark tests showed its brute strength, thanks to an increasingly evolved Snapdragon 888. Not to mention that great piece of display that was used, awarded by DisplayMate with the infraction of 13 records. Obviously Mi 11 integrates 5G connectivity, but the renewed standard should not be underestimated either Wi-Fi 6. To underline the decisive steps forward made by Xiaomi there is a video comparison where Mi 10 comes out with broken bones.

Upgrade 19 / 02: new round, new comparison, this time starring Redmi K40 Pro. You can find it at the end of the article.

The brand new was used in support of the Xiaomi Mi 6 Wi-Fi 11 module Xiaomi Mi Router AX6000. Its 4K AQM technology and 7 integrated antennas allow it to reach up to 3,5 Gbps download speeds. It uses 4 channels at 160 MHz, currently supported only by Mi 11, and the difference in file transfer speed it is substantial.

In the tests carried out and published by Xiaomi we witness the transfer of a data package from 103 GB, in the first case between two Xiaomi Mi 11s and in the second between two Mi 10. With the first couple they are needed 11 minutes and 16 seconds, while with the former top of the range we go up to 18 minutes and 42 seconds.

A difference of about 7 minutes, equal to about 40%, especially appreciable when transferring large files. It should be emphasized, however, that it is a palpable difference only by having ad hoc devices, such as the aforementioned AX6000 and an adequately powerful connection.

To promote the upcoming release of Redmi K40 Pro, Xiaomi has released a new version of the test that has seen opposing Xiaomi Mi 11 and Mi 10. The aim is the usual: to exploit the standard Wi-Fi 6 to transfer a large amount of files in the shortest possible time.

In the case of the new top of the Redmi range, the result was just as considerable, although slightly lower than the Xiaomi top. To transfer 101 GB have been employed 12 minutes and 30 secondsin our dedicated article, thanks to the Snapdragon X60 modem used in the Snapdragon 888. If you want to know all the news of Redmi K40 and K40 Pro, you can find them.