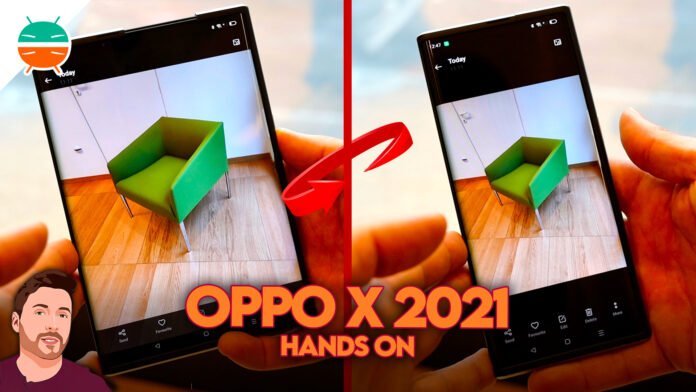 No creases or marks in the center, and a display that changes size as needed. This is, in essence, theOppo X 2021, the concept that the Chinese giant previewed in its last presentation event and that, strange but true, we had the opportunity to preview.

And ok, the term "try" is perhaps a big word, given that the company gave us the opportunity to use it for about half an hour, a very short time to be able to really evaluate the pros and cons of the concept (and of a lot of technology) that animatesOppo X 2021, but more than enough to confirm an idea that I had in mind for some time.

The fact that the company has decided to show its brand new concept of smartphone that rolls up (or, rollable phone), is tangible proof of the change of pace of Oppo in Italy. And, believe me, the company founded by Tony Chen in the now distant 2004 has all the cards on the table to become, especially in the Bel Paese, the “new Huawei”, both in terms of innovation and in terms of sales.

Oppo X 2021: our preview test of the rollable phone 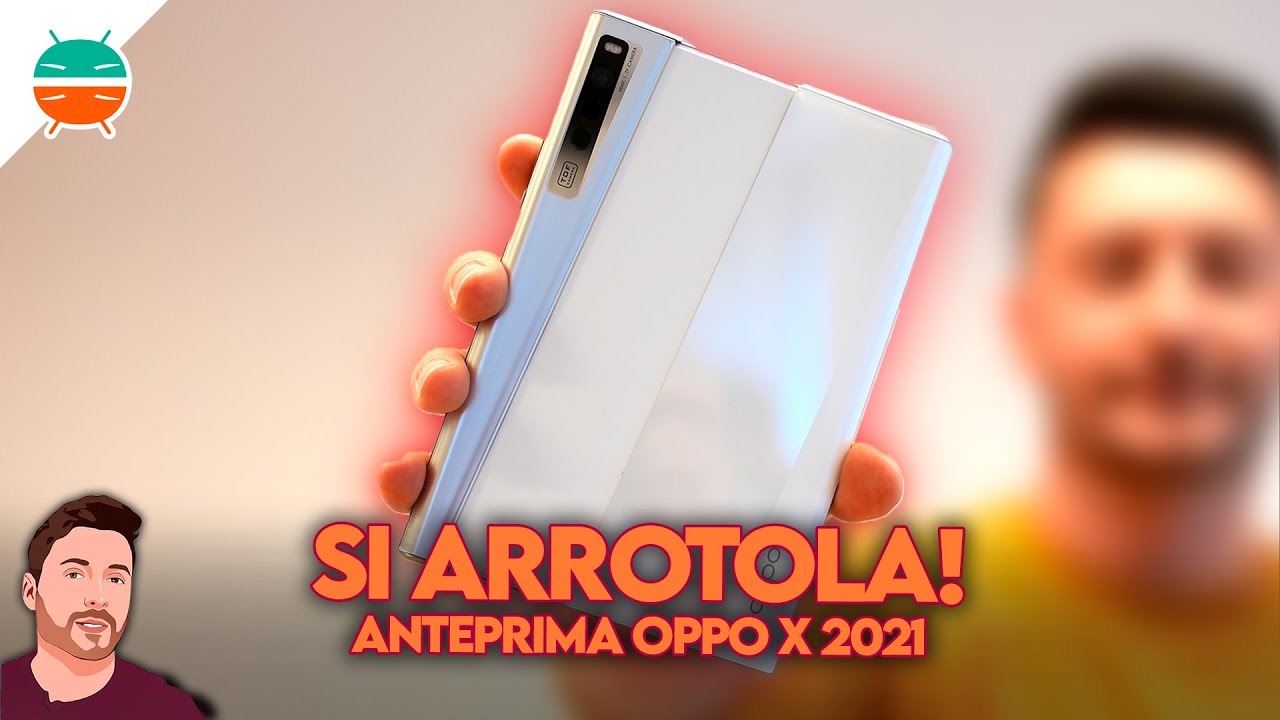 The reality is that Oppo was not the first and only company to talk about smartphones that roll up. Also TCL, followed byLg rollable, with a few months to spare, they showed their concept of rollable phone, with the difference, however, that those of Oppo produced it and entrusted it, albeit for a very short time, to journalists. And, yes, it's still a concept, but Oppo's move was brilliant.

In a nutshell, the peculiarity ofOppo X 2021 it's a display Flexible OLED which, thanks to a series of proprietary technologies, which we will discuss shortly, is able to “flow” and pass from 6.7 "to 7.4" in seconds. Of course, in terms of naked and raw thumb travel it's not a huge difference, but I can already tell you that the user experience it changes radically when the space of use is "extended".

To create the "magic" just make one swipe on the power button positioned on the right frame of the device, and the screen will change size thanks to three main elements, born from patents owned by Oppo: the company has guaranteed the mechanism for over 100.000 openings and closings and, making two calculations, considering a rather intense use, according to what declared by Oppo the mechanism is guaranteed for poco less than 3 years. 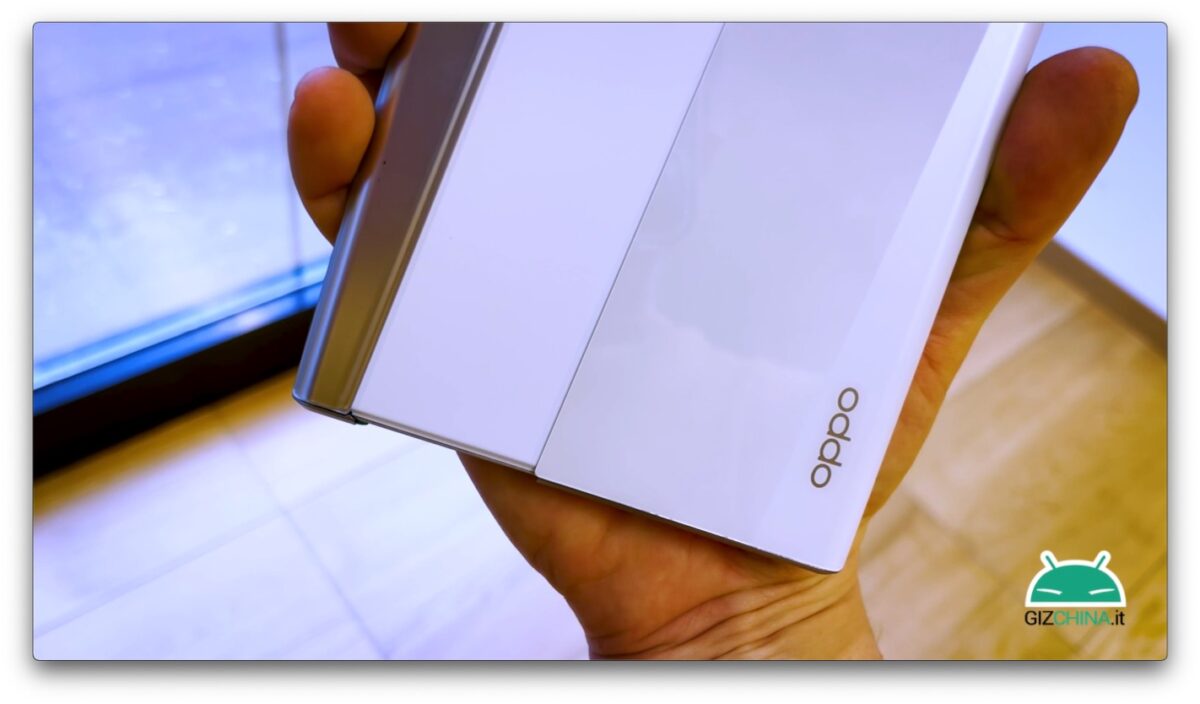 The whole is animated by Roll Motor, two roller motors that the company has created ad hoc to allow the scrolling of the screen with aconstant force output and a stress that is equally distributed throughout the screen: inside the device the flexible display moves along the central axis and, thanks to a bearing with cursor, the movement is managed in a very small space.

There is also a mechanism that prevents the screen from collapsing inward. It is a kind of "2-in-1 plate”Which is based on two lateral supports with a comb structure: when the display is closed, the two substrates join together, while when the display is open they slide to support the panel in order to avoid any creases. There is also a dynamic chassis, in turn composed of a fixed frame and a sliding one, which has the purpose of providing further protection to the device.

Lastly, protection is also guaranteed by the Wark Track. A high-strength steel laminate, which is 0.1mm thick and follows a very similar movement to that of a track. 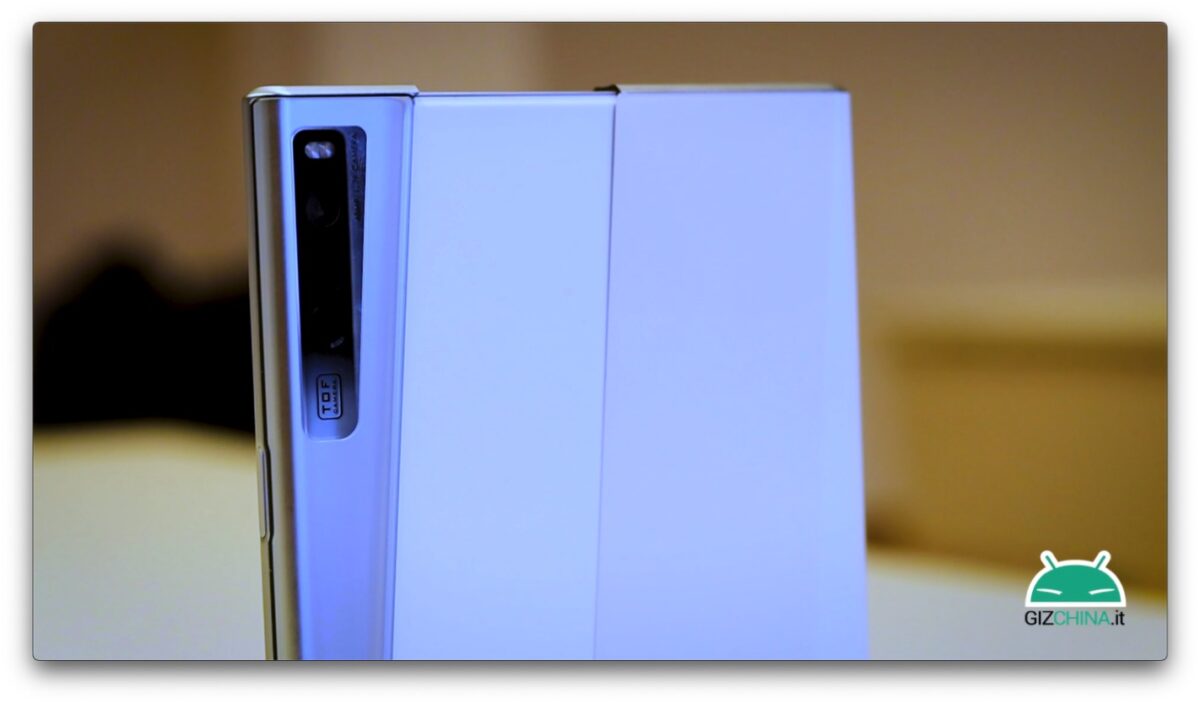 Leaving out all the technical features related to processor, RAM etc, in the prototype there is a module a three rear cameras which integrates two TOF 3D sensors and a single traditional camera. But again, being a concept it would make no sense to specify the megapixels. Also because, for now, there is no camera for selfies.

What I can tell you is that, despite not being a commercial product in the near future, the sliding mechanism is already capable of transmitting a good feeling of solidity. Furthermore, the concept could open up new scenarios regarding the arrangement of the antennas, and above all the speakers: the audio quality of the integrated speaker system is already definitely high, with perfectly balanced frequencies and a very pleasant spatial effect. 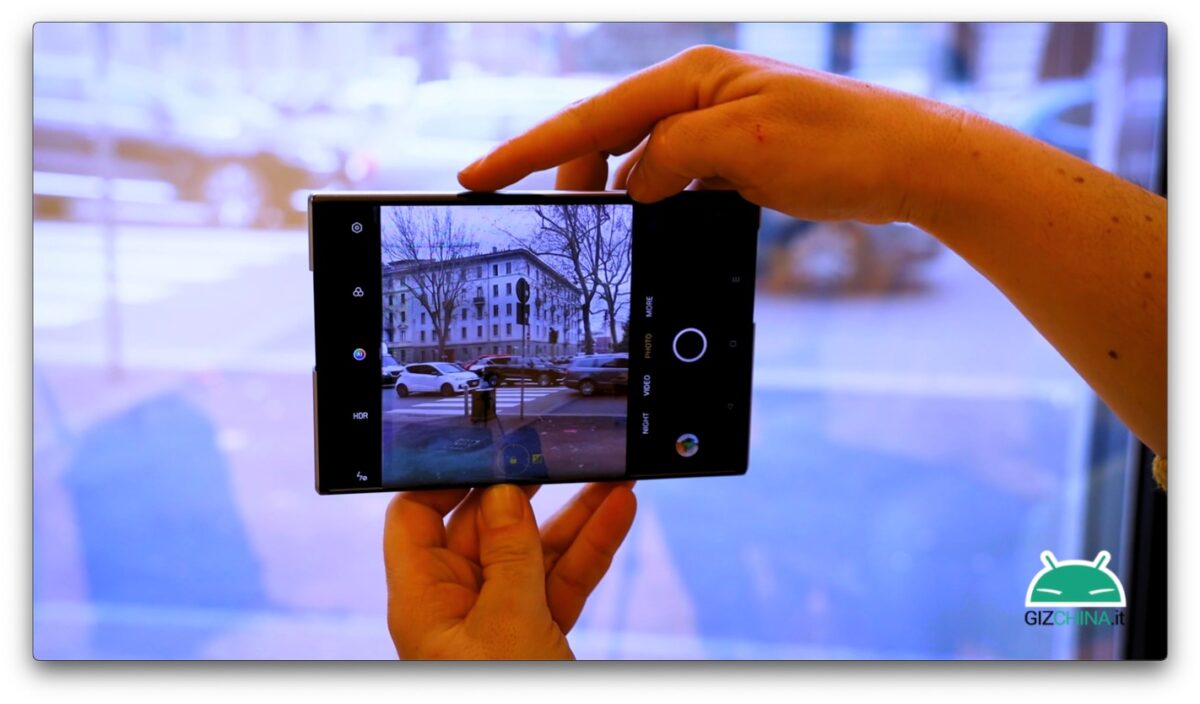 Nell 'Oppo X 2021 There is also a customized version of ColorOS, which has been modified to adapt to the two different screen sizes, and which uses animations that are beautiful to look at but which may seem rather "slow" in the transition. In a nutshell, the ColorOS by Oppo X 2021 it uses a smartphone interface with a 6.7 ”screen and a tablet interface with the screen set at 7.4”.

Depending on the screen configuration, the home, the settings section, the camera application interface and so on will change. But the adaptation was not just focused on the operating system: it is possible for example watch a video on YouTube and open the screen to enjoy a larger image, or you can also play games like PUBG with the extended screen, in order to have more space available and a more immersive gaming experience.

There is also a mode Dual display, with which you can run two applications at the same time, which will be side by side and can be used without any limitation.

Currently, there isn't one date of sale in Italy for the new Oppo X 2021. For now, the company's rollable phone continues to be a prototype, and as such it is also rather difficult to be able to evaluate it clearly. 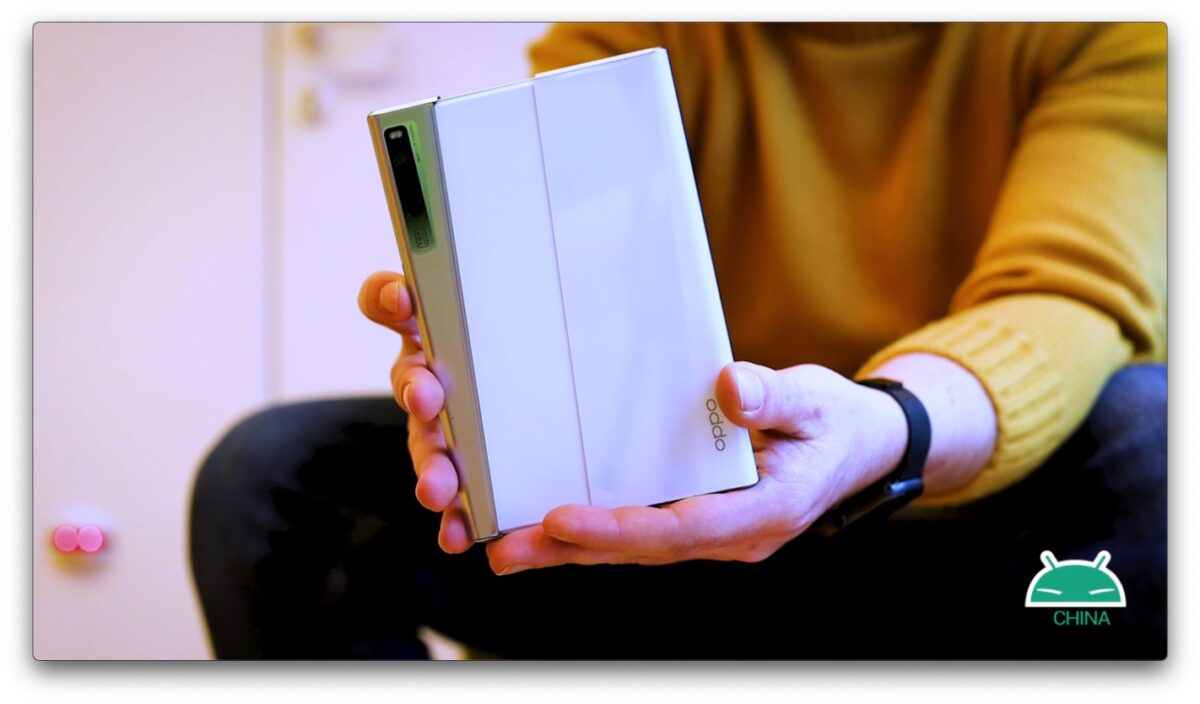 Why yes, the smartphone we got to try is pretty heavy and thick, has a camera module that perhaps is not able to compete with the current foldables and the real convenience of using such a smartphone is yet to be evaluated.

As always, when dealing with particular form factors like this, everything is in the hands of the developers who will have to adapt their apps to accommodate such a screen or, at least, it is the company that will have to think about a adaptation system forced applications. 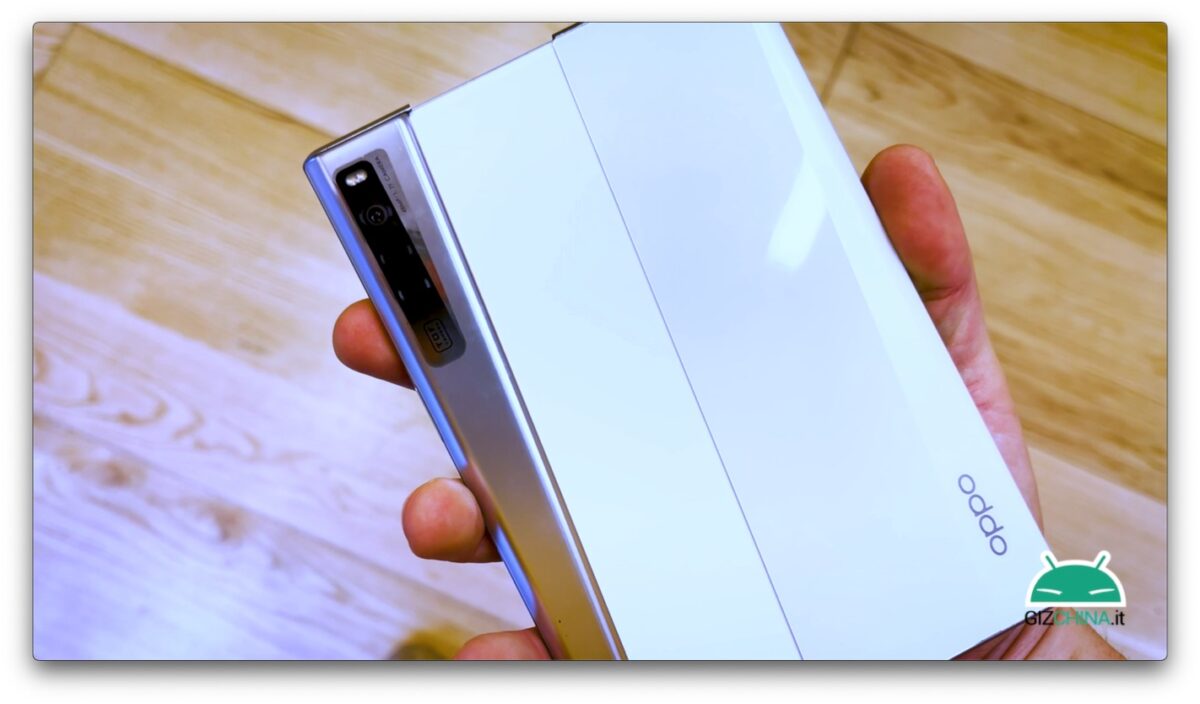 For now, of course there is still work to be done on the software: split-screen works only horizontally, for example, and there are some bugs from time to time.

But hey, hats off dear Oppo because, despite being still only a prototype, the build quality is definitely is already of very high level and, frankly, it transmits a much greater solidity than that of the first Galaxy Fold from Samsung.