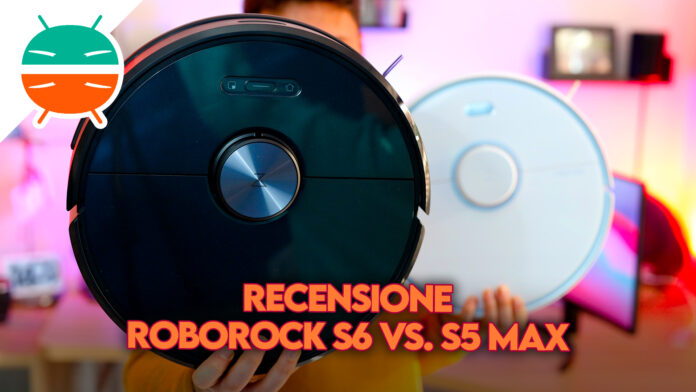 If initially it was always associated with Xiaomi, now Roborock it can go on on its own. The manufacturing company, among other things, of best robot vacuum cleaners and floor cleaners has become sufficiently famous to be taken as a reference point in the sector, a sector full of alternatives and which has been enriched with the arrival of the Dreame D9, the first robot of the company that with its 3000 pa of power aspiration convinced us a lot in the course of testing for our review.

But, Dreame aside, there are many models produced by Roborock that have managed to score a real sales record, thanks and above all to the excellent value for money: above all the Roborock S5 Max and the Roborock S6, which have rather similar technical characteristics, but some important differences. Which is better? And, above all, what changes between the two? In this video review we will focus on Roborock S6 evaluating their performance and differences with the Roborock S5 Max. And if you want to know every detail about the latter, I suggest you take a look at the our review.

As in practically all exponents of this particular market category, in the packaging of Roborock S6 we do not find a very rich endowment. It would have been nice to find some more spare parts, but we're used to it by now. Despite this, however, inside the package there are space:

Minimalism continues to be the main protagonist of design in Roborock S6. Just as in the Roborock S5 Max there are no prominent elements, and the whole external structure (made of ABS) is pleasant and almost "anonymous". Superiorly there are three buttons, unlike the S5 Max which integrates two, with which it will be possible to manage the cleaning of the robot, and there is also the turret for LIDAR navigation which brings the total thickness of the robot to about 10 cm: with his 35 x 35 x 10 cm il Roborock S6 it is quite large, which means that it may not be able to "slip" under some lower furniture.

Good and solid charging base, the arrangement of the various sensors dedicated to the obstacle recognition, also present in the front bumper that manages to cushion the blow if the robot hits some object. The wheels are also decidedly bodied, allowing the Roborock S6 (as well as the Roborock S5 Max) to overcome small steps as long as they are not higher than 2 cm. In short, on balance, from the design point of view, the two models are very similar. 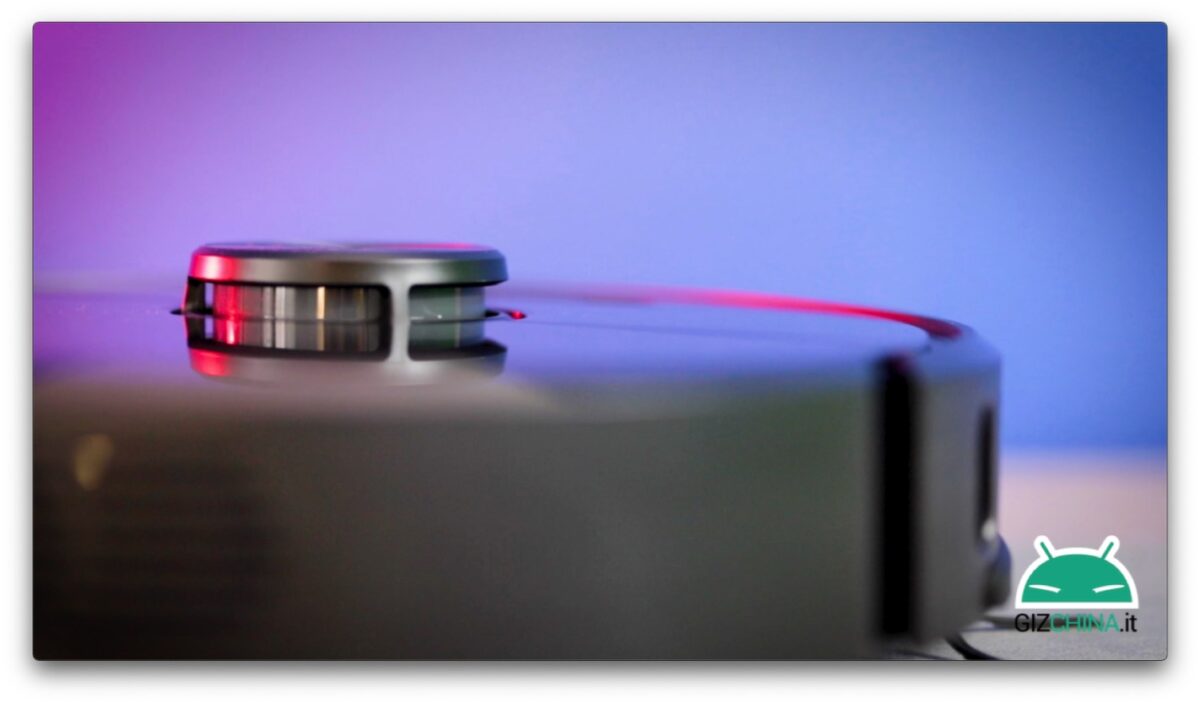 Two small notes, before moving on to the technical features: the suction hole in the dustbin it is not covered, and during the removal some debris can end up in the bin compartment of the robot, moreover the side brush is fixed with a screw, which can be annoying when you need to clean or change it.

And on balance, also from the point of view of the technical characteristics Roborock S5 Max e Roborock S6 They are very similar. Both use LDS and SLAM algorithms for active route planning, with which the surrounding environment is scanned 300 times per minute to create a virtual map the house. 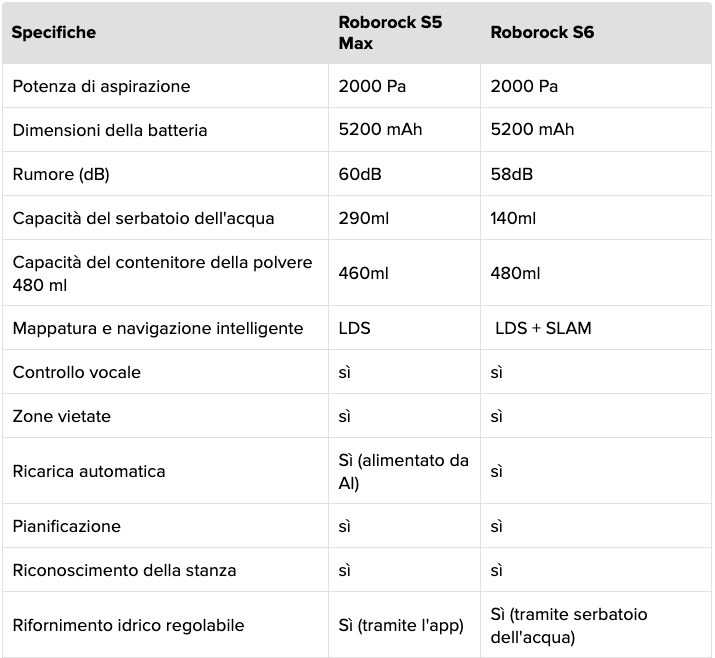 However, there are also some small differences. In both models the suction power is 2000 pa, but in Roborock S6 a noise reduction system has been added to allow the S6 to work a lower noise levels, albeit of poco: it goes from 60 dB of the S5 Max to 58 dB of the S6, and although numerically it might seem a negligible difference, in real life it is more than perceptible. 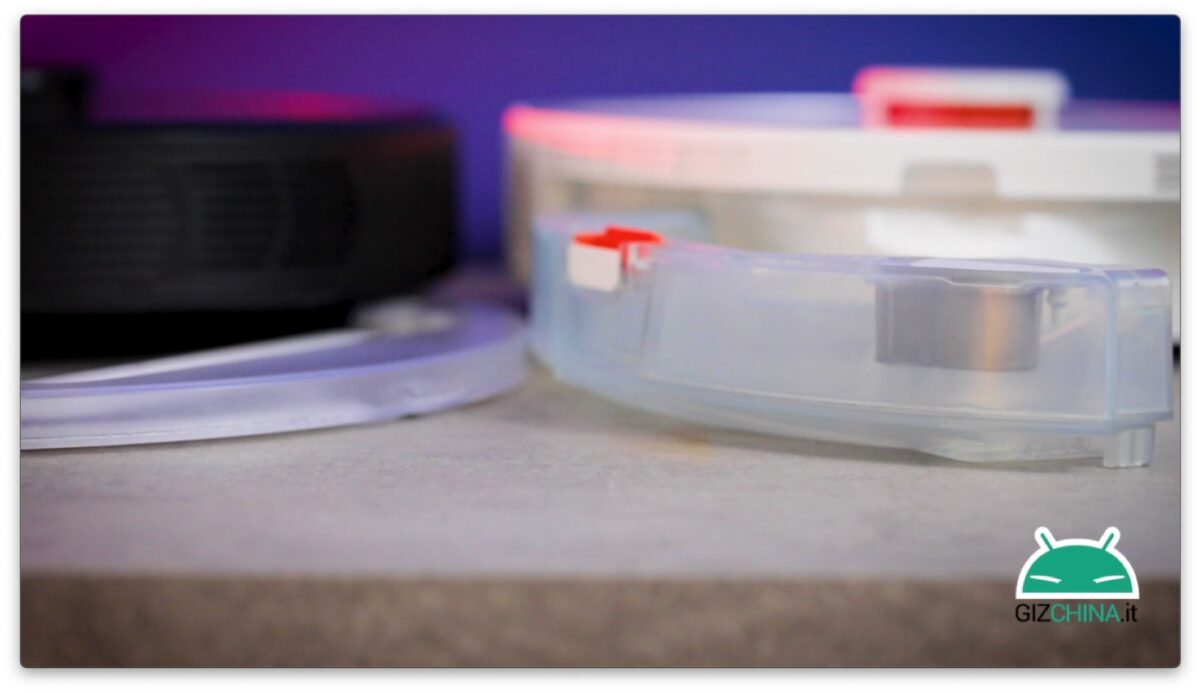 But the most important differences between the two models are in the containers. With his 290 ml Roborock S5 Max integrates a larger water tank than what is used in the Roborock S6 and which is able to contain 140 ml of liquid. And it doesn't end there, because if in the S5 Max the water tank is micro-controlled and manageable by the application (which will then allow you to choose the water level to use, even dividing it by room), in that of theS6 instead the choice of the quantity of water will be made by means of a small scrolling key present on its own on the container itself, which will limit several advanced features, such as the ability to set zones where you don't want water to be distributed. 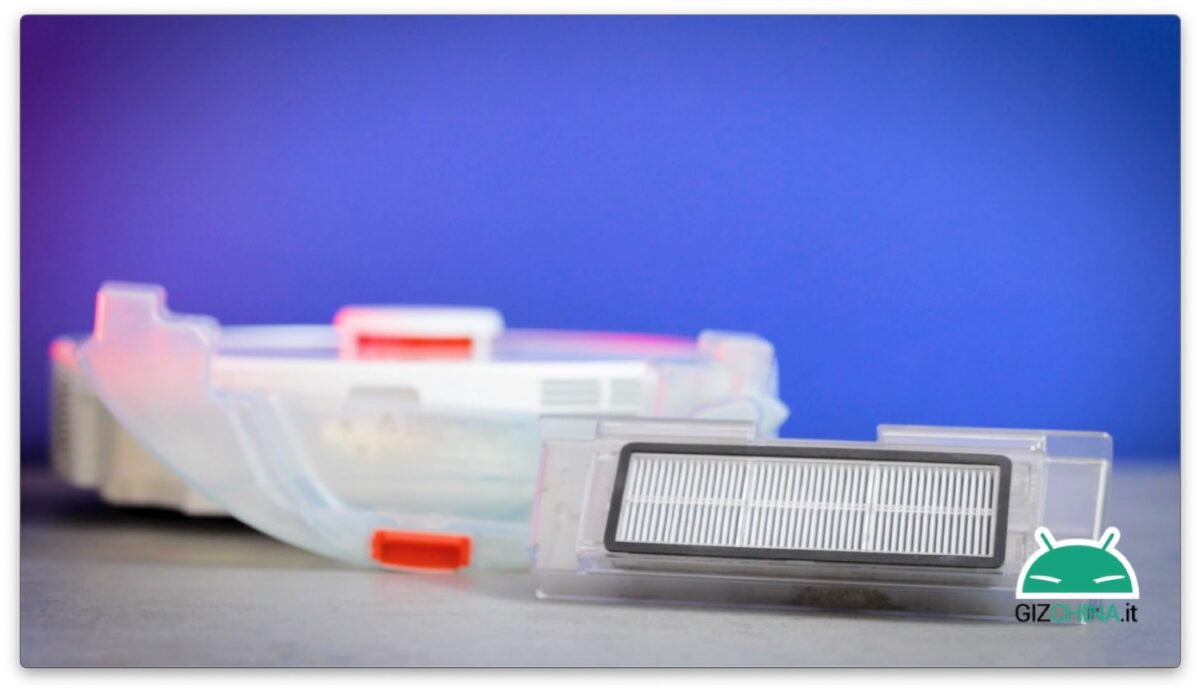 This is one of the biggest limits of the Roborock S6, above all because it is a robot vacuum cleaner and floor cleaner that is able to recognize carpets and adapt the suction power according to the surface: it would have been smart if it had been equipped with a microcontrolled water container in order to deactivate the leakage just recognized a carpet. However, with its 480 ml, the dirt container of the Roborock S6 it is larger than the 460ml used in the S5 Max. 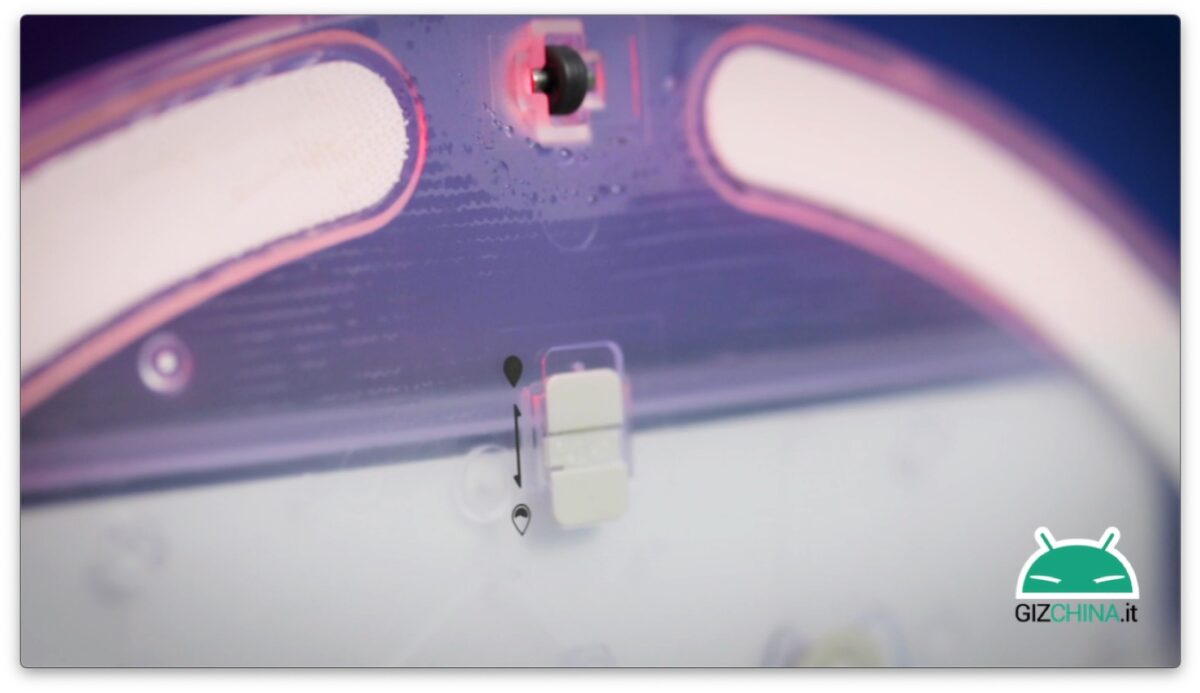 But limitation aside, the cleaning process of the Roborock S6 is top of the class. The navigation system allows the robot to use the best possible route to optimize cleaning and energy consumption, and thanks to its 300g of constant pressure throughout the process he is able to suck in whatever comes under him. This is also possible thanks to the excellent central brush, which is designed so as not to tangle long hair or pet hair, and is able to clean on any surface, parquet and carpet included. And yes, the water container is relatively small, but it is sufficient result to clean an environment of about 120 square meters without having to be refilled and to the maximum quantity of water distributed.

As with all the products of Xiaomi companies, the management of the Roborock S6 is entrusted to the excellent Xiaomi Home, that is, that app with which the Chinese company has decided to centralize all the devices of its ecosystem. And it is always like this: it is Xiaomi Home that gives an extra gear to Roborock's robotic vacuum cleaners and scrubbers.

After connecting to the wireless network and the first mapping of the house, which I recommend to do by eliminating all the obstacles that the robot vacuum cleaner might find in its path, the control of the different washing and suction modes, all the integrated functions in the robot vacuum cleaner they can be modified and managed with extreme simplicity and in Italian. The voice reproduced by the robot itself is also in Italian.

And without getting too specific, because by now we know the app by heart, the management of the maps and rooms that are created completely independently, is identical to what we have seen in the other robotic vacuum cleaners and floor cleaners of the other Xiaomi brands: it will allow you to associate a name to each room, in order to facilitate cleaning in zones or in rooms, which can also be repeated twice consecutively by activating the function. The management of the maps of the different floors of the house is also supported in the Roborock S6. 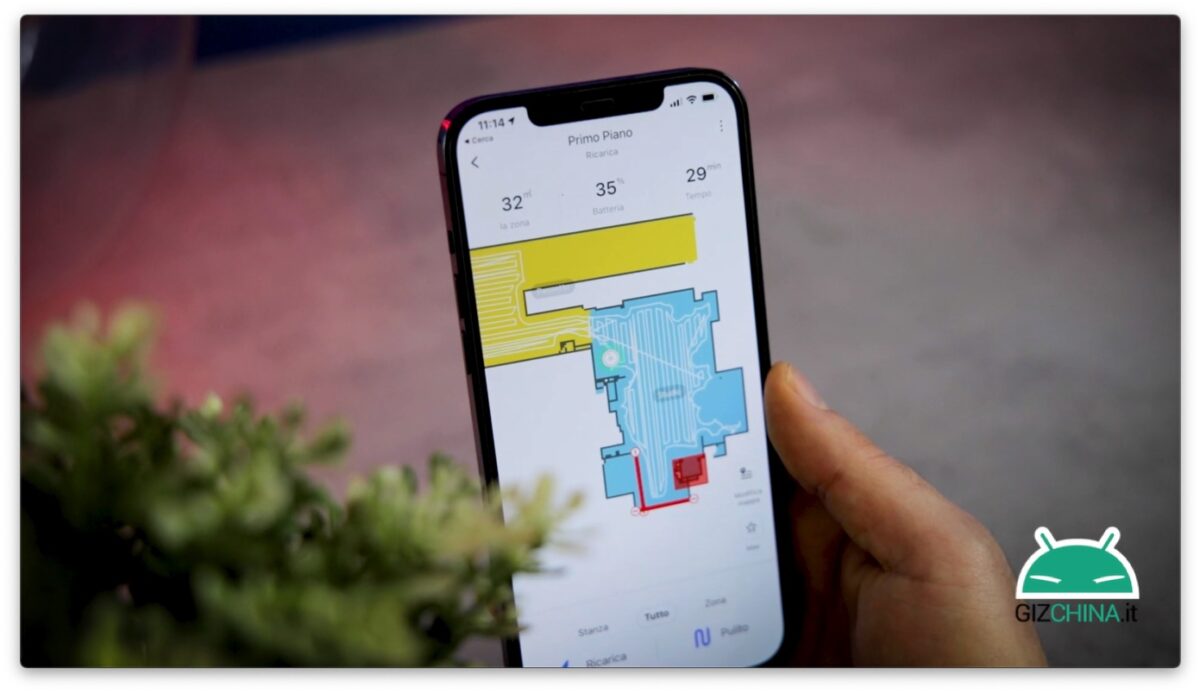 You can also activate the scheduled cleaning programs, each of which can be customized according to cleaning methods, areas to be cleaned and - clearly - at the time and it is possible to manage with extreme simplicity also the virtual walls and exclusion zones: in this way it will be possible to prevent the robot from cleaning beyond a certain border, or in a particular area of ​​the floor. And yes, the precision with which the vacuum cleaner from Xiaomi follows these directives is centimeter. Good job.

Both the Roborock S5 Max and the Roborock S6 integrate a lithium-ion battery from 5200 mAh but, probably for some missing functions in the S6, the autonomy changes substantially. If the maximum operating time (at minimum suction power) in the S5 Max is 120 minutes, the Roborock S6 for up to 150 minutes before you have to reload it. 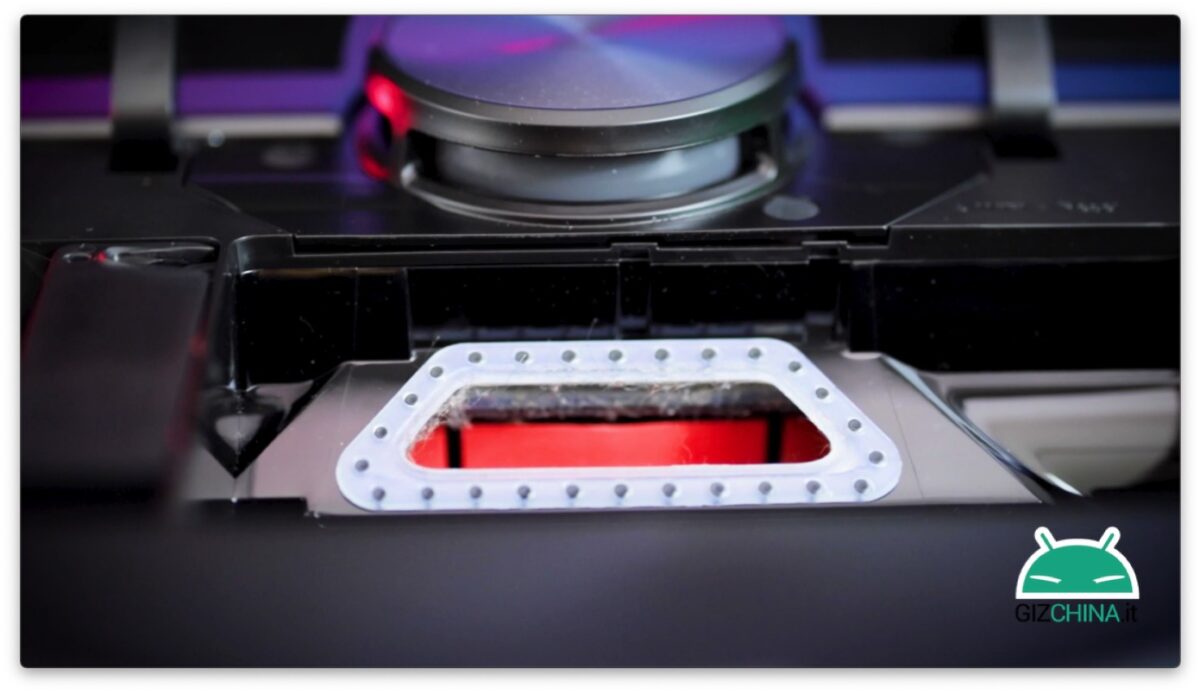 In real life, that is, using it at maximum suction power, in cleaning an environment of about 120 square meters Roborock S6 discharges by about 40%, which makes it more than suitable for the continuous cleaning of even much larger environments.

Il price in Italy of the Roborock S6 is 561,11 euros, but with our coupon (found below) you can take it home to 408,90 € both in white and black color. Roborock S5 Max instead is slightly cheaper: it has an official price of about 490 euros, but through our coupon (always below) you can buy it at 351,60 €. And on balance, with our discount it is a more than balanced expense, especially considering the characteristics of the two products. 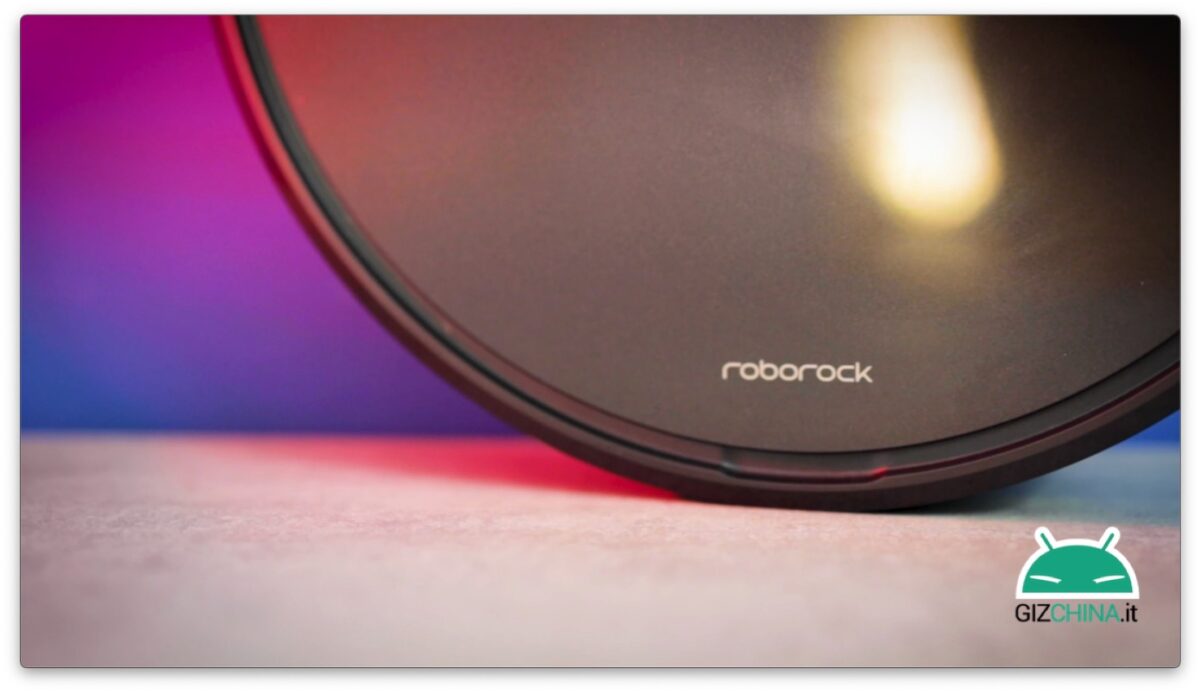 Of course, despite being quieter and with a slightly more powerful side brush, the price difference between the two models is such as to put the buyer ahead at a crossroads and wrap him in a vortex of indecision (more than justified). Better the Roborock S5 Max or the Roborock S6? Well, the reality is that a higher number does not always mean better performance.

And the point is this: we are in the presence of two gods best robot vacuum cleaners and floor cleaners of the market, and while the Roborock S6 is more suitable for those people who do not give much importance to washing and polishing floors, with its larger and microcontrolled water container, the Roborock S5 Max in my opinion guarantees a better price / performance ratio.

Buy the Roborock S5 Max at a discount with our coupon: shipping is from Europe, with fast delivery and zero customs duties!

Buy the Roborock S6 in black at a discount with our coupon: shipping is from Europe, with fast delivery and zero customs duties!

Buy the Roborock S6 in white at a discount with our coupon: shipping is from Europe, with fast delivery and zero customs duties!

Amazfit GTR 2 is updated and allows you to choose the orientation of the ...

OPPO Band is close to debut in Europe