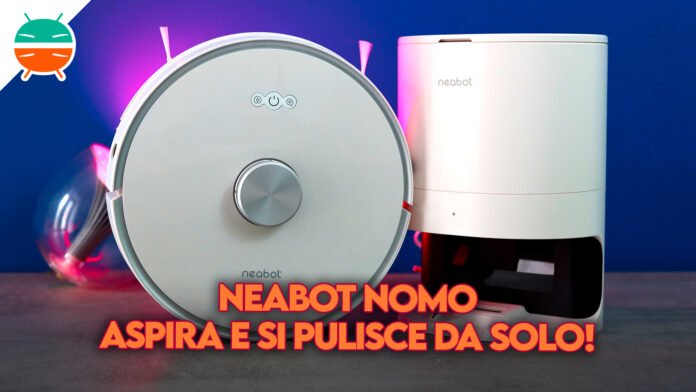 On paper, the Neabot NoMo Robot Vacuum practically contains the best that can be found in the world of robot vacuum cleaners. A market that, let's face it, is now chock full of alternatives, some of which are definitely very valid such as the Roborock S5 Max and the Dreame D9. And yes, it's fair to say that - in a way - the vast majority of robot vacuums tend to look alike, except for a few minor technical differences.

Some have a slightly more powerful suction power, some have a larger dirt container, some are able to recognize carpets and so on. And then there is the Neabot NoMo Robot Vacuum that cleans itself, thanks to a charging turret that includes a dirt bag that will need to be changed or emptied monthly, solving one of the most annoying problems related to these particular devices: cleaning and maintenance.

Given the presence of a much larger charging base, with which the robot will self-empty, the packaging of thevacuum cleaner Neabot NoMo Robot Vacuum it is significantly more bulky than that of the other members of the category.

L'vacuum cleaner Neabot NoMo Robot Vacuum is a high-end robot vacuum cleaner, and as such the materials with which it is assembled, as well as the robustness of the structure are of a high standard. The design, on the other hand, does not differ in the slightest from the other models made by the satellite companies of Xiaomi: the body is protected by a white ABS body, above there is the laser sensor for navigation (which, however, is positioned in the center of the robot vacuum cleaner), the dirt container is placed on the lower section of the circumference, and so on. In short, at first glance thevacuum cleaner Neabot NoMo Robot Vacuum it might seem identical to all the other members of the category.

But things change with the charging base. Indeed, the "basona" (pass me the term). Because this is precisely the characteristic that distinguishes the Neabot robot vacuum cleaner from all other models. Ok, the most attentive of you will surely have noticed a certain similarity between thevacuum cleaner Neabot NoMo Robot Vacuum and the Proscenic M7 Pro, but this is another story, also because the Neabot model does not integrate the floor washing function, in favor of two side brushes. 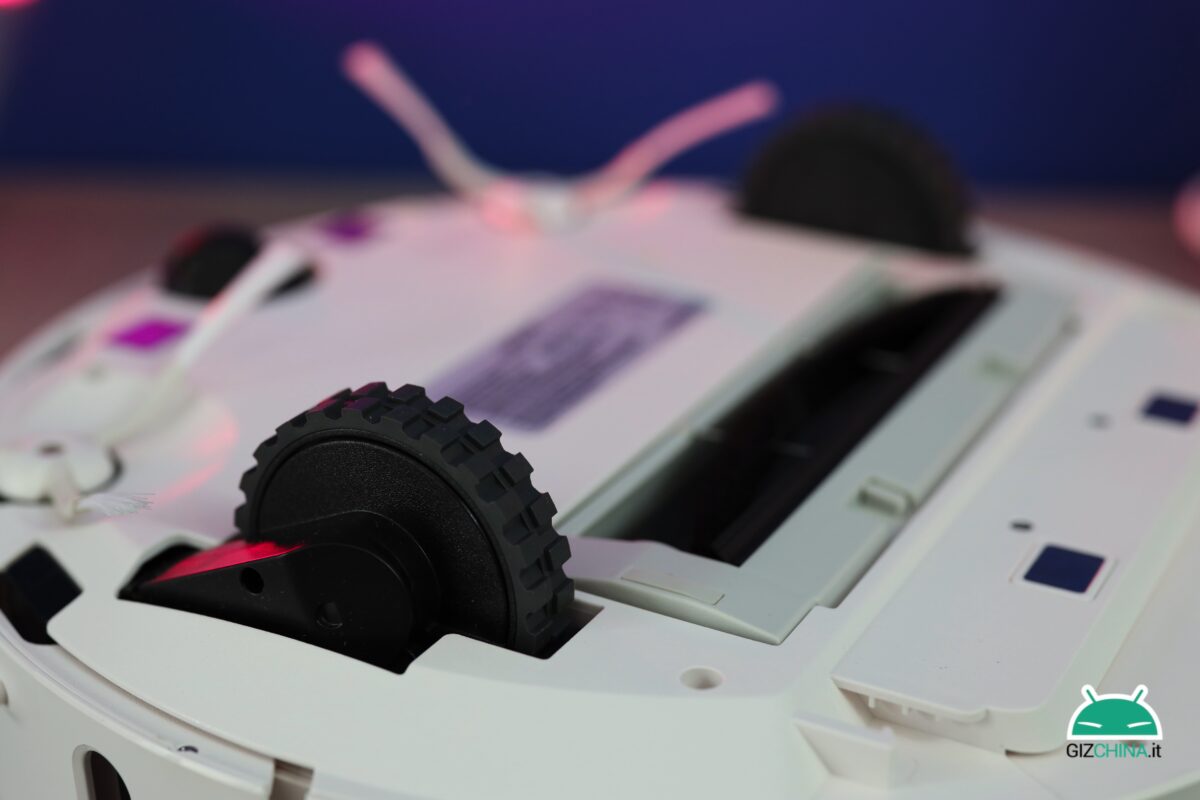 In any case, the charging base is made definitely fine, on the top there is an opening with which it is possible to access the compartment containing the dirt bag, and a motor is integrated with which everything will be sucked. The automatic emptying process it is very simple: the robot will go up on the charging base from the front, start the emptying and, when the process is complete, it will turn and start charging. 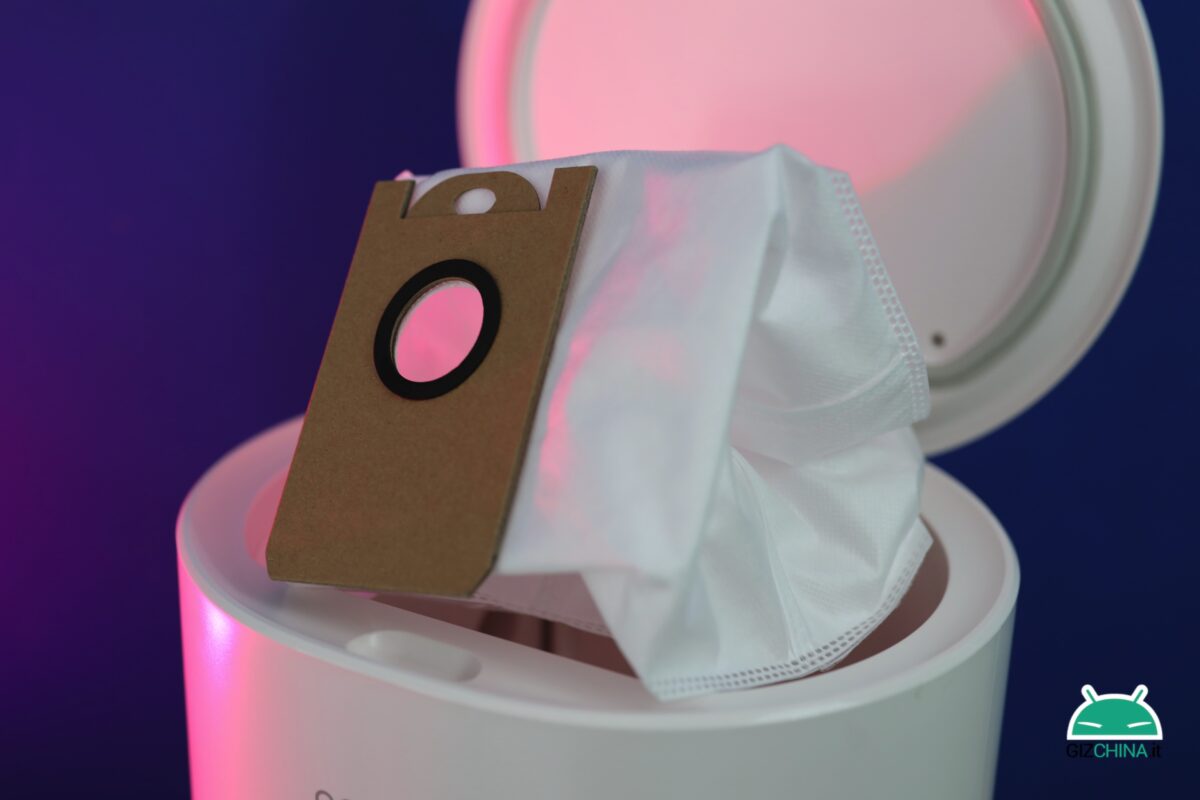 But it is good to keep in mind a not indifferent detail: although the emptying process lasts only 15 seconds and is very effective, the noisiness of the operation it is at very high levels and is very close to that of a plane taking off.

Il Neabot NoMo Robot Vacuumit is managed by the smartphone through the Neabot Home application which, alas, is only translated into English, French, German, Spanish and Chinese. No Italian then, and it's a real shame because it is a well-made and very easy to use app.

After connecting to the wireless network and the first mapping of the house, which I recommend to do by eliminating all the obstacles that the robot vacuum cleaner might find in its path, the control of the different washing and suction modes, all the integrated functions in the robot vacuum cleaner they can be modified and managed with extreme simplicity.

Again the maps of the house are created in total autonomy, in the same way we have seen in the other robot vacuum cleaners, and through the section Smart Maps you can add 3 types of areas: those with single pass cleaning, those with double pass cleaning and those to avoid. 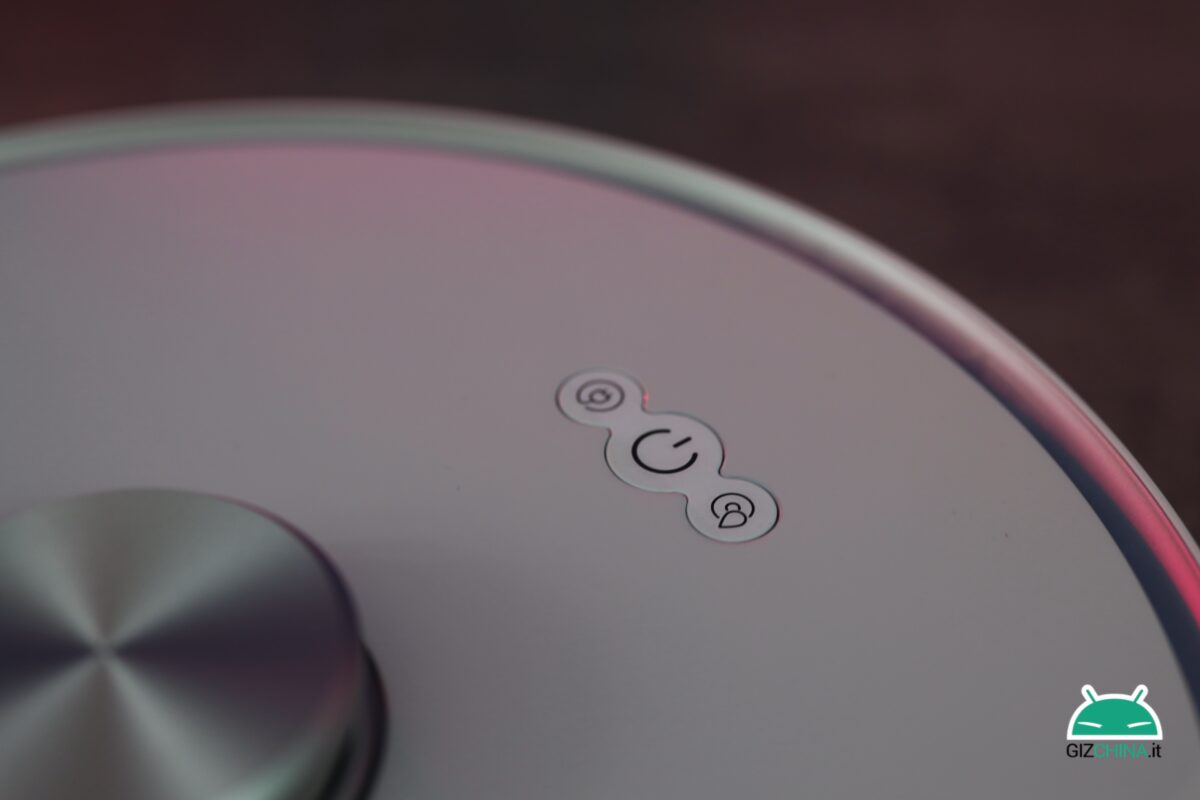 Clearly you can choose between three levels of suction available and set the scheduled cleaning (also based on the room and time): and this possibility is very convenient because it will allow, for example, the cleaning of the studio every two days in conjunction with the daily cleaning at the end of each breakfast, lunch or dinner.

Used to using models capable of vacuuming and washing the floor, I admit it: I feel a little lack of this functionality. But it must be admitted that the cleaning performance is the strong point of the Neabot NoMo Robot Vacuum. All this is made possible thanks to the integrated motor capable of guaranteeing a suction power of 2700 Pa, supported by double side brushes and by a central unit designed to avoid tangling long hair or animal hair. 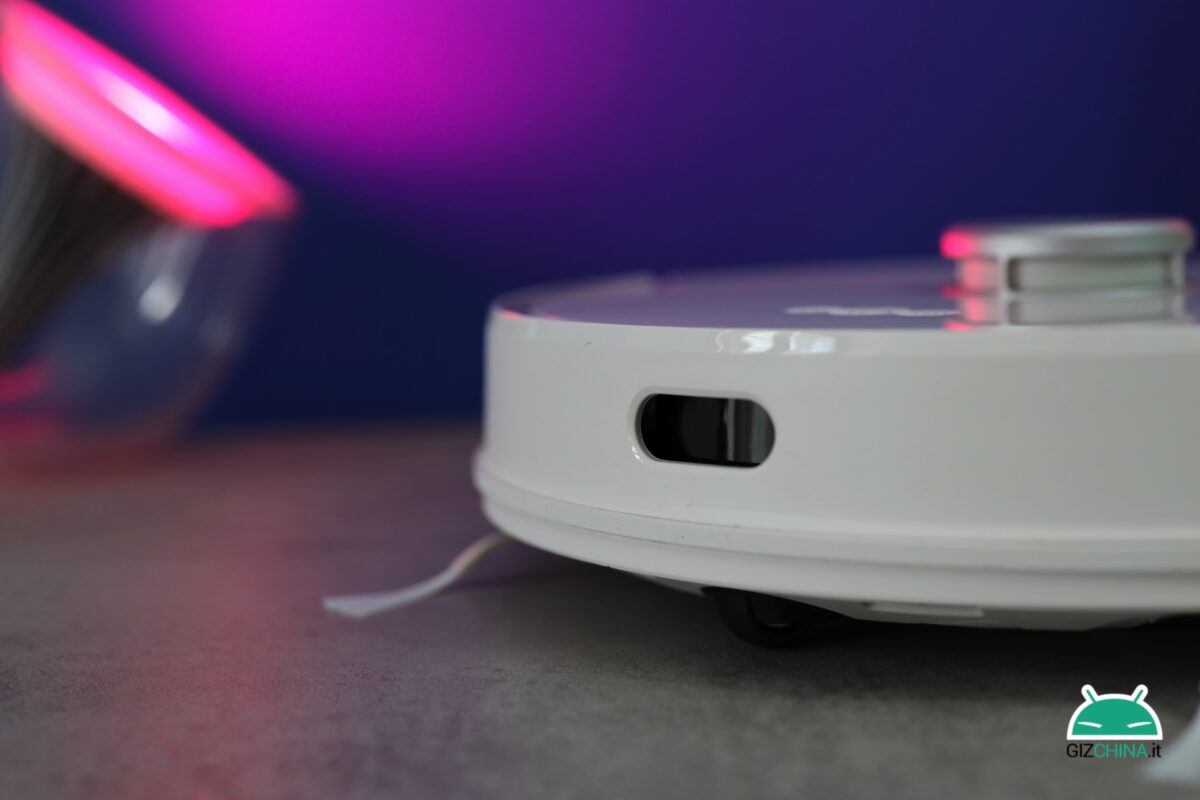 Il localization and mapping system then, it is very effective and allows the robot to move at its best on every occasion, even in the presence of rather annoying obstacles, which will always be bypassed very well. On the front there is a well-functioning anti-collision system, and fall arrest sensors are integrated that allow it to detect stairs or steps. 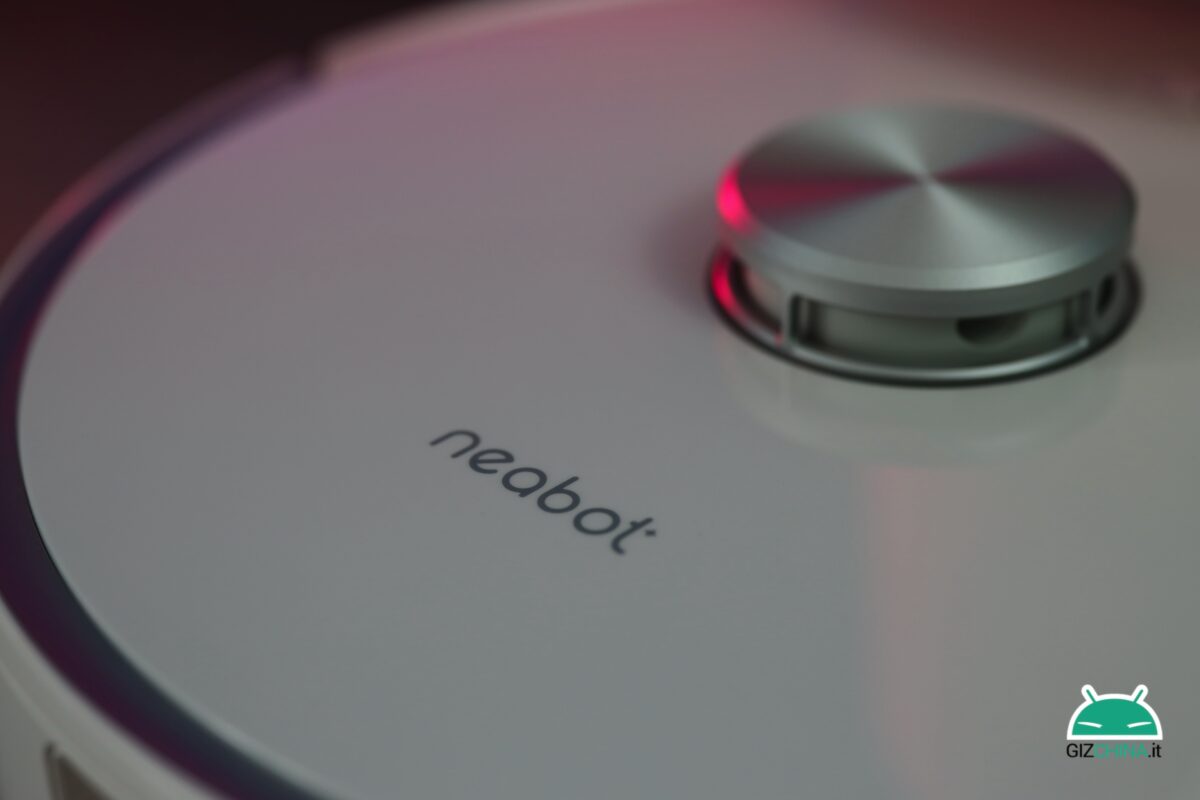 The automatic emptying then is well functional, even if it could happen that - in the case of many pet hair - lumps may form which hardly can pass through the emptying hole. 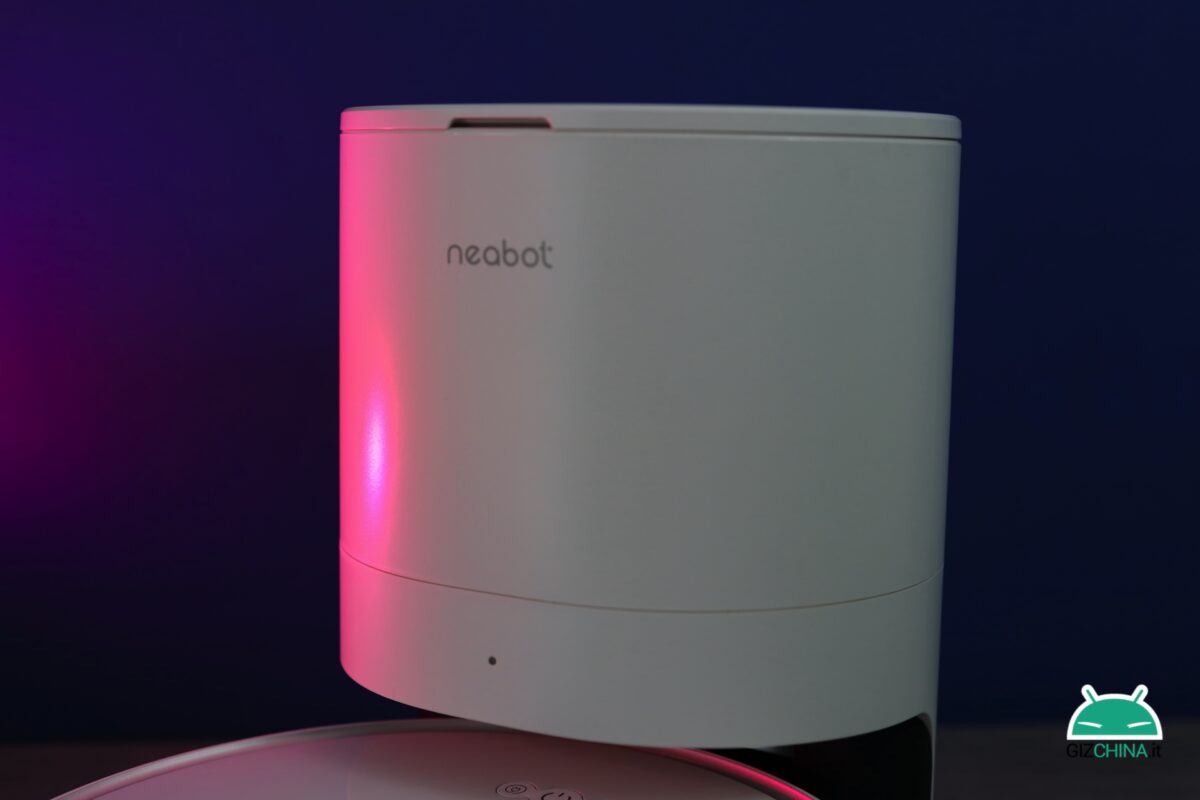 The battery is also excellent which, according to the company, should guarantee a continuous cleaning time of 3 and a half hours, in rooms of about 200 square meters. Performance that I have also found in everyday life: to clean an area of ​​about 100 square meters, with maximum suction power, the Neabot NoMo Robot Vacuum it consumed the battery by 45%, which gives me hope that the promises made by the company are true.

The price of Neabot NoMo Robot Vacuum is 499,00 euros on Amazon. And yes, this is a rather important figure that could remind potential buyers to evaluate different alternatives that, perhaps, would also integrate a floor washing system. Fortunately with the our coupon (found below) you can buy it with one discount up to 16% and which, in fact, makes the amount to be paid out much more interesting. 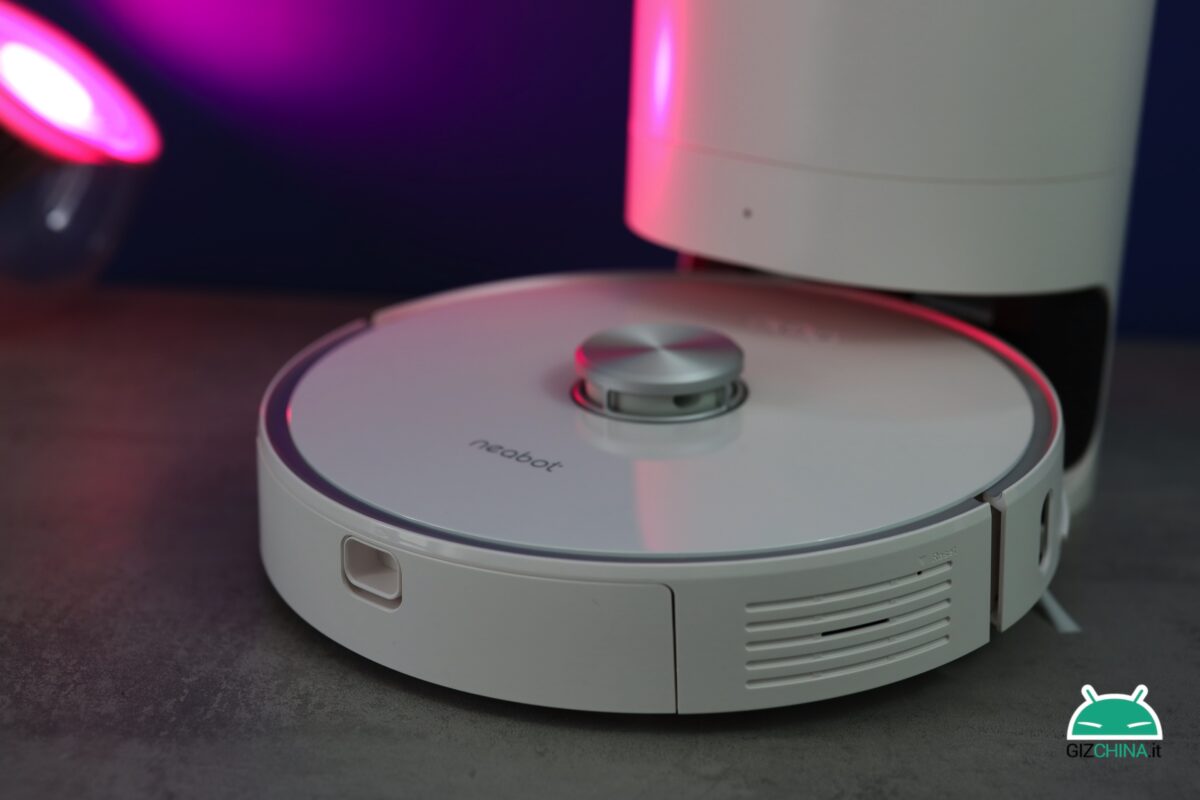 The reality is that before thinking about buying this robot vacuum cleaner, you need to be able to really evaluate your needs: if you want a balanced system capable of vacuuming and washing the floor, it is probably not the right choice, but if you want a robot only that sucks, able to guarantee high-level cleaning performance and less demanding maintenance, then the Neabot NoMo Robot Vacuum should be considered as a first alternative.

Buy the Neabot NoMo Robot Vacuum at a discount, with our coupon on Amazon!

Buy the Neabot NoMo Robot Vacuum at a discount, with our coupon!